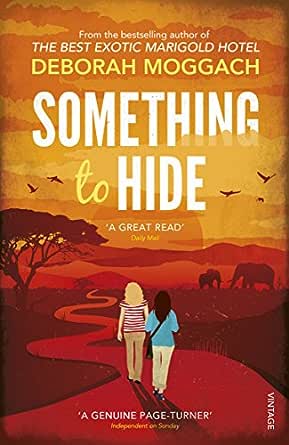 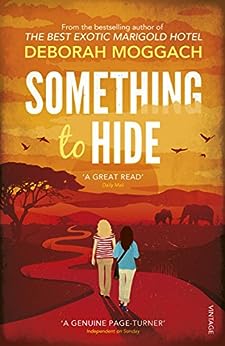 Something to Hide Kindle Edition

"This is an absorbing read, with surprises and moments of tension that make it a genuine page-turner" (Shirley Whiteside Independent On Sunday)

"Pulling the reader along on a fast-paced transcontinental journey, Something to Hide is engaging, poignant and prompts snorts of laughter" (Catherine Scott, 4 stars Daily Telegraph)

"An unpredictable tale of love loss and deception" (Red)

A warm, witty and wise novel about the unexpected twists that later life can bring, from the hugely popular author of The Best Exotic Marigold Hotel and Tulip Fever
See all Product description

Ralph Blumenau
5.0 out of 5 stars A real tour de force of plotting
Reviewed in the United Kingdom on 12 October 2015
Verified Purchase
Alternating chapters tell the stories of four women in different parts of the globe: mainly Petra, a lonely divorcee living in Pimlico, London, and Lorrie, living in White Springs, Texas, who dares not tell her husband that she has lost all their savings. More marginally there are Li Jing, a childless wife living in Beijing, and, even more marginally, Ernestine, a market woman in Oreya, West Africa - references to the nearby Kikanda tribe suggest it is in the Democratic Republic of Congo. Ernestine herself in mentioned by name only in the Prologue; but another character in the Prologue, the rather sinister Asaf, will play (though unnamed) a role later on. And it is through West Africa that, in some way, all the characters will be linked.

Each chapter is very readable, the situation in which the women find themselves in interesting, and we get a glimpse how each of the societies in which they live have undergone changes in recent years; but it takes a long time before we begin to learn - first through hints and then, about a quarter of the way through, gradually more specifically, how ingeniously the stories of these women become interconnected.

As the book develops, the main story is Petra’s (the only one of the four told in the first person), her love affaire with Jeremy, the husband of her best friend Beverley, when he was on visits to London from Oreya, where he worked for an international pharmaceutical company. It is impossible to say anything about this without giving away too much, except to say that Petra’s feelings and dilemmas are touching, heart-rending and, eventually, close to madness. There are many totally unexpected twists to her narrative which, towards the end becomes weirder and weirder, in part a detective story, complete with danger. As the book draws to its close, shock follows shock. And still there are more twists: the whole thing becomes an absolute tour de force. By that time my caring for Petra took second place to my amazement at the sheer audacity of Moggach’s plotting.

A smaller part of the novel is about Lorrie. What links her with Li Jing is that Li Jing’s husband, Wang Lei, a powerful Chinese businessman who also has interests in West Africa, has a reason to travel to Texas to meet Lorrie. She, desperate to make up for her lost savings, comes to an arrangement with him which creates feelings and dilemmas for her that also draw us in and make us care about her. As for Wang Lei, his story, too, takes an unexpected turn which makes Lorrie fly to West Africa.

I was constantly on tenterhooks about how the stories would develop. A wonderful and very effective piece of writing.

James Brydon
3.0 out of 5 stars An intriguing novel with plenty of twists
Reviewed in the United Kingdom on 4 August 2015
Verified Purchase
Deborah Moggach’s latest novel takes the form of intertwined separate narratives, one of which is told in the first person by Petra, a divorcee in her late fifties or early sixties, while the others are third person accounts of events affecting Lorrie, the self-consciously overweight American wife of a soldier currently serving in Iraq, and Li-Jing, the wife of a successful businessman from Beijing who is struggling to come to terms with her inability to conceive.

As the novel opens it is difficult to imagine how these separate storylines, unwinding on different continents, might coalesce. Moggach does, however, unravel the disparate plotlines very deftly, and their nexus proves to be on a fourth continent, in a fictional state in West Africa.
The story touches on a wide range of emotions – bitterness, resentfulness, jealousy, love and fear of loneliness – though is never bogged down in undue sentiment. None of the characters are particularly likeable though she sparks our interest in all of their plights. I am not wholly convinced of the plausibility of the story line, but I was able to suspend my disbelief while reading the book.

This was not the best of her books that I have read, but was still very enjoyable despite that.
Read more
3 people found this helpful
Helpful
Sending feedback...
Thank you for your feedback.
Sorry, we failed to record your vote. Please try again
Report abuse

Gillian Gain
5.0 out of 5 stars I should have liked more emphasis on the Chinese story
Reviewed in the United Kingdom on 8 July 2015
Verified Purchase
Her new novel is different from earlier novels. It covers matters of international importance. I should have liked more emphasis on the Chinese story. the author always winds up the tension until one wonders where on earth the story can go. I was a bit disappointed in the very brief epilogue. I hope this book will become as successful a film as 'Marigold Hotel' did.
As Deborah Moggach gets older her skills do not diminish.
Read more
6 people found this helpful
Helpful
Sending feedback...
Thank you for your feedback.
Sorry, we failed to record your vote. Please try again
Report abuse

sukisue
4.0 out of 5 stars Good fiction
Reviewed in the United Kingdom on 13 September 2019
Verified Purchase
An interesting story set mostly in Africa. Strange that two women of such different backgrounds kept up a friendship so long. eventually each one romantically involved with the same man. Woven into the lives of these two is the surrogate theme, which concluded rather abruptly. Would have liked more detail about the handover of the baby. An interesting book.
Read more
Helpful
Sending feedback...
Thank you for your feedback.
Sorry, we failed to record your vote. Please try again
Report abuse

Supergran
5.0 out of 5 stars A Must Read
Reviewed in the United Kingdom on 27 July 2017
Verified Purchase
Excellent novel, full of interesting and unexpected twists and turns. Strongly developed genuine characters you can recognise. Both funny and poignant, the skilful writing keeps you hooked till the end.
Read more
3 people found this helpful
Helpful
Sending feedback...
Thank you for your feedback.
Sorry, we failed to record your vote. Please try again
Report abuse
Load more international reviews

bellarogan
3.0 out of 5 stars Disappointing
Reviewed in the United Kingdom on 18 May 2019
Verified Purchase
I have read lots of this author's books,but found this one hard to follow and believe.Still that's how it is.
Read more
One person found this helpful
Helpful
Sending feedback...
Thank you for your feedback.
Sorry, we failed to record your vote. Please try again
Report abuse

Amazon Customer
5.0 out of 5 stars A very good read.
Reviewed in the United Kingdom on 13 December 2019
Verified Purchase
An unusual plot that I really enjoyed reading.love the way Deborah moggach weaves her tales.
Read more
Helpful
Sending feedback...
Thank you for your feedback.
Sorry, we failed to record your vote. Please try again
Report abuse

eva
2.0 out of 5 stars too long and boring descriptions
Reviewed in the United Kingdom on 7 October 2016
Verified Purchase
Not a interesting book.lots of interlinked stories the outcome of them is fairly obvious from near the start,The part two in Africa went on far too long.Very disappointing.
Read more
One person found this helpful
Helpful
Sending feedback...
Thank you for your feedback.
Sorry, we failed to record your vote. Please try again
Report abuse

Mrs P C O Mawdsley
5.0 out of 5 stars A enjoyable and thought-provoking read
Reviewed in the United Kingdom on 11 September 2016
Verified Purchase
An engaging contemporary novel with clever plot linkage and sympathetic,believable characters.. It demonstrates with humour and pathos the contrasting lives of 4 representative fictional characters living and communicating with 'something to hide' across three continents, and lightly yet informatively it touches on a number of serious issues. An excellent novel for a book group to read and discuss.
Read more
Helpful
Sending feedback...
Thank you for your feedback.
Sorry, we failed to record your vote. Please try again
Report abuse

Mollymandy
5.0 out of 5 stars 😀
Reviewed in the United Kingdom on 15 August 2017
Verified Purchase
Another brill book by DM.
Read more
One person found this helpful
Helpful
Sending feedback...
Thank you for your feedback.
Sorry, we failed to record your vote. Please try again
Report abuse

TWINKLE
5.0 out of 5 stars Happy endiings?
Reviewed in the United Kingdom on 28 September 2016
Verified Purchase
I enjoyed reading this book many twists and turns. Makes you think what you would do in the same