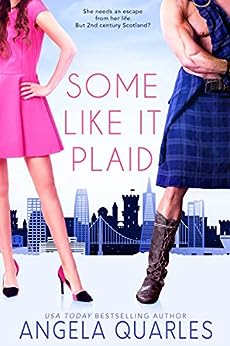 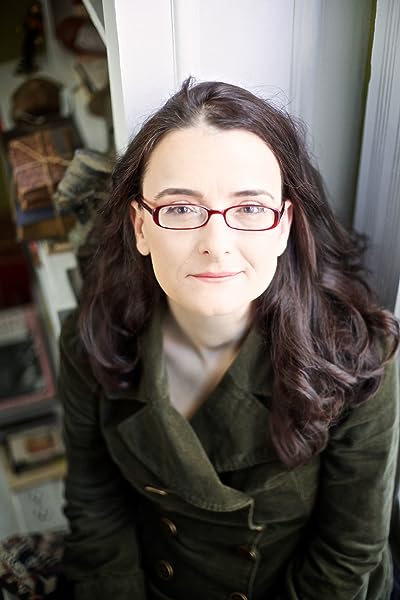 An avid reader herself, Angela Quarles writes books she'd like to read-laugh-out-loud, smart, sexy romances that suck you into her worlds and won't let you go until you reach The End. She is a RWA RITA® Winner and USA Today bestselling author of contemporary, time travel, and steampunk romance. Her steampunk, Steam Me Up, Rawley, was named Best Self-Published Romance of 2015 by Library Journal and Must Love Chainmail won the 2016 RITA® Award in the paranormal category, the first indie to win in that category. Angela loves history, folklore, and family history. She decided to take this love of history and her active imagination and write stories of romance and adventure for others to enjoy. When not writing, she's either working at the local indie bookstore or enjoying the usual stuff like gardening, reading, hanging out, eating, drinking, chasing squirrels out of the walls, and creating the occasional knitted scarf. --This text refers to the audioCD edition.

4.2 out of 5 stars
4.2 out of 5
50 global ratings
How are ratings calculated?
To calculate the overall star rating and percentage breakdown by star, we don’t use a simple average. Instead, our system considers things like how recent a review is and if the reviewer bought the item on Amazon. It also analyses reviews to verify trustworthiness.

Élodie Nicoli
5.0 out of 5 stars An escape but this far in time ... !!!
Reviewed in the United States on 19 November 2019
Verified Purchase
What a woman is to do when instead of job offer in Scotland, she finds herself unstuck in time, estranged from everything she has always known...

Wow, since I have read Must Love Breeches, I was eagerly waiting for this new time travel romance. And the wait was worth it.
It is a so different story than the few books I have read by Mrs Angela Quarles, first the choice of a very remote place and time, then her soft feminism plea.
Ashley is feeling like she is a disappointment , her family has always made her sense as if everything she does is not right or doomed to failure. And alas, even her marriage went to ash, her trust betrayed by her ex-husband.
Now she must hide to avoid being caught in the cross-fire of those looking for her ex’s debts.
So what’s better than this weird job offer so far away she might escape her burden and be able to hold her head high again.
Connall is doing what he has to help ensure a future for his clan. He just not expected the magic of his Druid to send him far in time to find the right woman for him.
Yet, he is back home with a 21st century woman, not very pleased with the outcome of her answering to a Craiglist add.
I must confess Ashley is one hell of a woman, I have landed in a so backward place, I would have been running screaming my arms up whatever the yummy piece of highland hunk next to me.
Outside the magic side of the story, theirs is the universal one of acceptance and consideration of each one value.
Connall is a fair and kind fellow, he wants to do what is right for his tribe, finding a wife if he has too but also let her go if she feels she does not belong among his kin. He only follows the way of his father and those before him. Why even if he respects Ashley, he is not yet ready to share control with someone he feels it is his mission to protect, not the other way.
Ashley swore to never again feel helpless in a relationship, she wants a common ground where things can be discussed together. She accepts she is no match to the men’s strength but she also knows women have other values than brawn.
So when Connall appears to listen to what she has to say, she begins to wonder if going back to her time is the right decision. But not everything is what it seems, and their journey to trusting one another will not be a straight and easy one.

Outside the romance, the author did an awesome job at recreating the period and its way of life. The landscapes and the different housings become real along the words as the various peoples interactions.

5 stars for this entertaining tale about the ubiquitous quest of the right person destined to be our other half.

I was granted an advance copy through Netgalley by the publisher. Prior to it, I preordered my own.
Here is my true and unbiased opinion.
Read more
4 people found this helpful
Report abuse

Grerob
5.0 out of 5 stars Can one woman increase a herd? love it!!
Reviewed in the United States on 19 November 2019
Verified Purchase
She was at her lowest and fighting to stay alive , then this wildly hunky Scottish man asks her to go to Scotland to cook and clean for him!!! Who would not go!!! Boy was she is for a huge surprise!!! Thee was much more to her new life in Scotland than cooking and cleaning!!! He took her to a whole new century!!! It was hard to adjust but for the first time in her life she was making a difference , being needed. If only she could change her man way of thinking!!! Does she stay or does she leave, That is the question!!
Can love over come all barriers ???
Read more
2 people found this helpful
Report abuse

Kris A
5.0 out of 5 stars Read years ago - Still absolute blast to read!
Reviewed in the United States on 4 March 2020
Verified Purchase
Years ago, Quarles was a debut author with an Amazon site showing what looked like a 16-yr-old girl. I nearly passed on her book thinking, "na, too young". But I read the summary of her book and was enchanted. I bought the book and fell in love with her writing. It was fresh, fun and incredibly romantic, in the 'time travel' genre, she's a solid A. I now own all her books except Steam Me Up, Rawley (on my To Buy list as budget permits). Her books are wonderful with the right amount of sizzle and this is the book that started it. Whether sitting on a plane, park bench or stuck in bed with the flu, her books are a Go To for me. Do yourself a favor, read a sample if you're not sure. Bet you get sucked in like I did!
Read more
One person found this helpful
Report abuse

Sherry Tritt Holton
4.0 out of 5 stars Come along on a time travel....
Reviewed in the United States on 19 November 2019
Verified Purchase
I love time travel. Scottish time travel is my favorite and this author has a way to suck you into the time period with her heroine.
You can feel the tension in Ashley when she discovers she has been taken back in time to a place so different from anything she has ever known
Connell makes you giggle and sympathize with him when he is in Ashley's time while he tries to understand all things modern.
Don't miss this wonderful story!
Read more
2 people found this helpful
Report abuse

TXBRITGAL
5.0 out of 5 stars The craziest job interview of all time!!!!
Reviewed in the United States on 18 November 2019
Verified Purchase
An exciting whirlwind of a read. Ashley is on the run from shady creditors. It seemed her jerk of an ex husband had used all their money in bad transactions. Instead of going after him, it seems she's the fall "guy". Even her family didn't believe her when she said how controlling he was, and how he illegally used all their funds. If her own family didn't believe her, why would anyone else? It was these things that led her to answering the odd Craigslist ad. The LAST thing she expected was this gorgeous Scottish man in front of her. Even less did she expect him to whisk her off to ancient Scotland. How will she survive, and can she trust Connal? I loved every moment of this read. Filled with adventure, excitement, humor, and many differences of opinion! At the center was one dynamic woman determined for her voice to be heard, and a desire to make a difference. I can't wait to read more books to come!
Read more
One person found this helpful
Report abuse
See all reviews
Back to top
Get to Know Us
Make Money with Us
Let Us Help You
And don't forget:
© 1996-2021, Amazon.com, Inc. or its affiliates