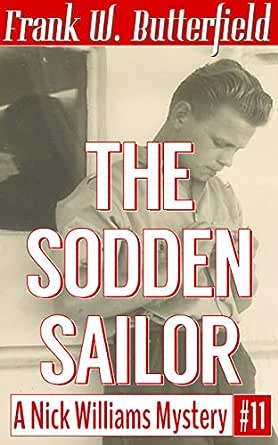 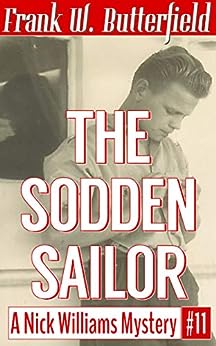 It's Sunday night and Nick has decided he wants to get back in the kitchen to make a couple of pans of lasagna for dinner, something he hasn't done since he and Carter moved into the big pile of rocks on Nob Hill.

Captain Daniel O'Reilly, pilot of The Flirtatious Captain, is bringing a friend for dinner. Instead of his latest love interest, the captain introduces Nick and Carter to an old friend, a man who is on his last legs and who has a favor to ask: can Nick and Carter help him get his girl and her son out of Red China?

That's where things begin but it's far from where they end...

Julian
4.0 out of 5 stars Carter's tour of the Pacific...
Reviewed in the United Kingdom on 31 October 2019
Verified Purchase
taking in Hawaii, Hong Kong (with a side trip by Nick to the mainland to carry out a rescue mission) and on to Australia. That is, of course, not even scratching the surface of the plot - which is a tad more complex than usual. Confirmed fans will need no urging - newcomers might do worse than go back to Book#1...
Read more
Helpful
Sending feedback...
Thank you for your feedback.
Sorry, we failed to record your vote. Please try again
Report abuse

Ulysses Grant Dietz
4.0 out of 5 stars Book eleven and going strong. It's as much about emotions as adventure.
Reviewed in the United States on 8 September 2017
Verified Purchase
The adventures of Nick Williams and his husband Carter Jones take our boys even farther afield this time—all the way to the “mysterious orient.” Butterfield has such mastery over the basic story line and his characters now, that each mystery is not a mystery, but an exploration of what it was to be gay in the 1950s from every possible angle. As always, Nick and Carter’s vast wealth isolate them from all of the truly bad things—except for emotions. For all his impatient, privileged tough-guy approach to life, Nick is a weeper; and in book eleven he weeps more than usual. And that’s what I love about Nick, because his heart is as vulnerable as any child’s, for all his devil-may-care exterior.

What drives the main plot this time around is an unlikely quest to rescue the half-Chinese half-sister of Captain Daniel O’Reilly, captain of Nick and Carter’s yacht. There are a couple of sub-plots, including a murder that is the source of this volume’s title.

More importantly, however, are some truths that Nick and Carter face together; truths about childhood, and how each of us is formed by what happens to us when we’re young and stupid and, often, helpless. In learning some unexpected history about his step-mother’s former maid, Geneva, and Carter’s mother, Nick has an epiphany about where he might have turned out differently himself. Former cop Mike Robertson has become such a fixture as the head of Consolidated Security, that we forget he was Nick’s first love, and took him in when Nick’s father threw him out at nineteen. Nick’s own father started out this series as such a supremely nasty guy, it’s hard to fully grasp the man he has become. Butterfield takes such pleasure in exploring these evolving relationships, and it’s a pleasure to read.

As always, it is the interactions of the characters and not the plot itself that is the heart of the book. Fueled by the action, the true point of the narrative, even as our boys buy yet another airplane (with a great provenance!) and fly across the world to Hong Kong is this:

“We’re all family, whether we’re related or not.”

It’s a very simple premise, but no less powerful for all that. As one character reminds Nick and the reader: “Don’t forget Nick. Every moment is wonderful.”

Even in the bad old days, life was wonderful if you had friends. That’s the crux of this series, and it is proving a strong lynchpin to even the most unlikely adventure.

Amazon Customer
4.0 out of 5 stars Interesting trip to British Hong Kong
Reviewed in the United States on 9 August 2018
Verified Purchase
I've enjoyed this series so far and this was an exciting saga. Nick and Carter are able to move around the world as a couple, but aren't immune to the homophobia and discriminatory laws of the time. This makes for interesting stories and this is no exception.
Read more
Helpful
Sending feedback...
Thank you for your feedback.
Sorry, we failed to record your vote. Please try again
Report abuse

Geoff Whitwell
5.0 out of 5 stars Another fantastic book in the series
Reviewed in the United States on 2 July 2017
Verified Purchase
This series continues to draw the reader in. No two are alike yet they all involve sleuthing and action. The introduction on new characters is intriguing and the continuing interaction with old characters gives you more insight into their lives and interests. And in all this, the love between Nick and Carter keeps everyone together.
Read more
One person found this helpful
Helpful
Sending feedback...
Thank you for your feedback.
Sorry, we failed to record your vote. Please try again
Report abuse

silvia
5.0 out of 5 stars Another winner!
Reviewed in the United States on 15 November 2019
Verified Purchase
There was a lot of intrigue in this book, and so many surprises. The depth of love between Nick and Carter really jumped out. Every book has been my fave which makes me look forward to read the next.
Read more
Helpful
Sending feedback...
Thank you for your feedback.
Sorry, we failed to record your vote. Please try again
Report abuse
Load more international reviews

Dan
5.0 out of 5 stars As as all the rest
Reviewed in the United States on 18 June 2017
Verified Purchase
I am a one guy type of guy and like the way Nick and Carter are true to each other.
The one thing about Nick that is hard to figure does he keep a bunch of folded bills of different didominations in his pocket, he always seams to have the right folder bill for the right tip
Read more
One person found this helpful
Helpful
Sending feedback...
Thank you for your feedback.
Sorry, we failed to record your vote. Please try again
Report abuse

Yafa Crane Luria
5.0 out of 5 stars Loved it.
Reviewed in the United States on 5 June 2017
Verified Purchase
I loved it. I think it might be my favorite of the series. My mouth dropped open in surprise a few times as Nick and Carter go from SF to Hawaii to Hong Kong to Australia. Only thing I would add is that Nick should've gotten tetanus shots after that one particular kiss.
Read more
One person found this helpful
Helpful
Sending feedback...
Thank you for your feedback.
Sorry, we failed to record your vote. Please try again
Report abuse

Michael B. Hoffman
5.0 out of 5 stars I recommend you start reading.
Reviewed in the United States on 16 September 2017
Verified Purchase
Love all of the books in the series. I live in the Bay Area so nice to read the story that I can relate too.
Read more
Helpful
Sending feedback...
Thank you for your feedback.
Sorry, we failed to record your vote. Please try again
Report abuse