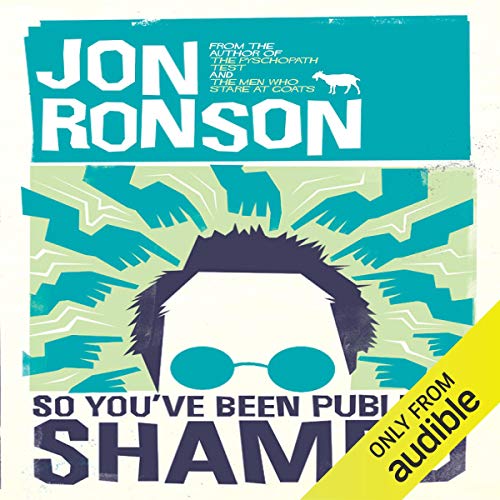 So You've Been Publicly Shamed

3.9 out of 5 stars
3.9 out of 5
12 global ratings
How are ratings calculated?
To calculate the overall star rating and percentage breakdown by star, we don’t use a simple average. Instead, our system considers things like how recent a review is and if the reviewer bought the item on Amazon. It also analyses reviews to verify trustworthiness.

Dan Edwards
1.0 out of 5 stars Terrible
Reviewed in Australia on 4 November 2020
Verified Purchase
I thought it was rubbish and tried to return it but couldn’t.
Read more
Helpful
Report abuse

Purin
5.0 out of 5 stars Thought-provoking, leaves you wanting much, much more
Reviewed in Australia on 14 October 2020
I highly recommend getting the audio version of this book because the narration by the author takes this to another level. He does not tell you what to think on the issue of public shaming, rather he provides you with many morbidly fascinating case studies and surprising added details about stories you thought you already knew. He then leaves you to think over these very uncomfortable stories, knowing that the subject could one day be you, debating them with your own conscience and leading to some great discussions with friends (you won't be able to stop yourself from bringing them up!)
Read more
2 people found this helpful
Helpful
Report abuse
See all reviews
Back to top
Get to Know Us
Make Money with Us
Let Us Help You
And don't forget:
© 1996-2021, Amazon.com, Inc. or its affiliates