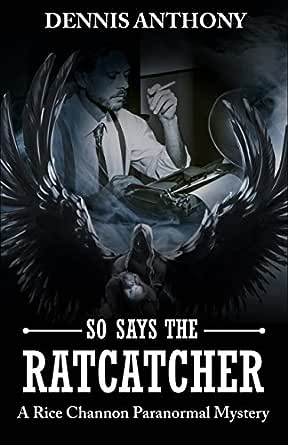 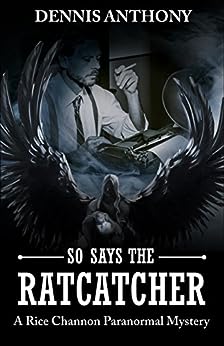 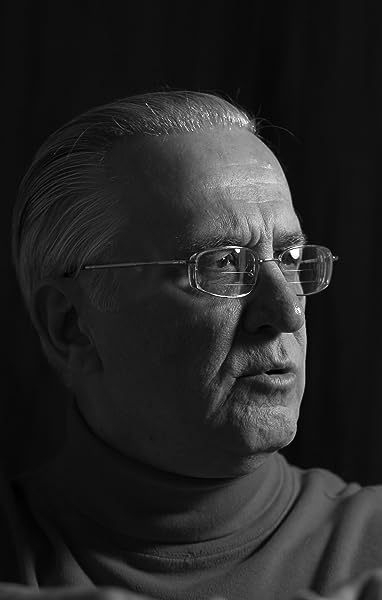 corrinne
TOP 1000 REVIEWER
4.0 out of 5 stars A pleasantly surprised good read
Reviewed in Australia on 2 July 2018
I was pleasantly surprised with this book wasn’t expecting it to be as good as it was for some reason and I was caught up in it the mystery ha stop guessing then guessing again not how I expected it to turn out right at the ending i personally thought was a little let down as it seemed all hyped up then blah that’s all that happened but still a good read and unexpected just when you thought u think U know what’s going on it’s not what you expected
Read more
Helpful
Comment Report abuse
See all reviews from Australia

H.Taylor
5.0 out of 5 stars A paranormal murder mystery
Reviewed in the United Kingdom on 23 December 2017
Verified Purchase
So Says the Ratcatcher is the second story in the Rice Channon Paranormal Mystery by Dennis Anthony. I had read the first a long time ago so did have an understanding of who the Ratcatcher was. Unlike some series it didn't matter if the reader hadn't read the previous book 'Ratcatcher, Be Still' A Rice Channon Mystery.

We meet back with The Ratcatcher aka Rice Channon known to the police as the Ratcatcher because of his past success in identifying murderers. Set in 1972 a brutal murder occurs that no one actually believes happens. A young paperboy who witnessed the crime goes to the only person he truly trusts the Ratcatcher. Rice's boss and the cops don't believe the boy, however he isn't so sure it's not the truth, going by his intuition and his faith in the kids story convinces Channon to believe something did happen.

At times the paranormal aspects give you quite the chills. Unlike some series that do not need a sequel this was just as good as the first but even creepier. Great job Dennis Anthony.

David Styles
5.0 out of 5 stars Skillfully woven crime story with paranormal elements, well-written.
Reviewed in the United States on 21 December 2017
Verified Purchase
As an aficionado of this genre, I was impressed by the quality of writing in this book, which was sufficiently good as to almost distract from its other good qualities, not limited to its very credible characterization and well-crafted plot.

The book has a “gritty noir” feel to it, though it stands out for being set in the 70s, a decade most traditionally ignored where possible; this work however makes its home there very well—most of the scenes felt quite timeless to me, though I daresay someone with a more insider understanding of the world of journalism (as the author clearly does) would place it much more readily.

If the book has any weak points, I’d say it’s that dialogues could sometimes stand to have more dialogue tags (ie, he said, she said, etc) so the reader doesn’t have to count lines to know who’s talking in some places. But as you can tell, I’m rather reaching there for something to criticise.

All in all, a great crime-story-with-paranormal-aspects book that stands out from many of its peers, that I’d recommend to any fellow fans of this genre.
Read more
4 people found this helpful
Helpful
Sending feedback...
Thank you for your feedback.
Sorry, we failed to record your vote. Please try again
Report abuse

Payal Sinha
5.0 out of 5 stars So Says the Ratcatcher- Awesome
Reviewed in the United States on 10 December 2017
Verified Purchase
So Says the Ratcatcher is an awesome book that is a mix of mystery and the supernatural. The period is the 70s when bohemian leaving and hippie was in cult and the author has done a good job of capturing the time frame on his canvas. The book had a mediocre start and it reminded me somewhat of Agatha Christie, but it got better and better, so much that it was hard to put it down even for some necessary work. For example a woman is having an affair with two men at the same time but only one of the men is aware of this. Next, couple of important characters see ghosts all the time. One description was very creepy. The central character Rice wakes up one morning to see the ghost of a child held in his embrace. Rice could actually feel the weight of the child and smell the baby smell, but, the next moment the ghost fades away. There are similar lots of spookiness that would delight while giving you goosebumps. I loved reading all of it.
Read more
4 people found this helpful
Helpful
Sending feedback...
Thank you for your feedback.
Sorry, we failed to record your vote. Please try again
Report abuse

Michelle Willms
5.0 out of 5 stars Excellent mystery
Reviewed in the United States on 17 April 2018
Verified Purchase
I loved the characters, the story, the stories ascribed to the characters, and the intrigue. The Ratcatcher himself is an outstanding hero, with few niceties, and fewer friends. Definitely worth a read.
Read more
2 people found this helpful
Helpful
Sending feedback...
Thank you for your feedback.
Sorry, we failed to record your vote. Please try again
Report abuse

Kristen
5.0 out of 5 stars A great read.
Reviewed in the United States on 22 April 2018
Verified Purchase
I choose a 5 star rating because it keeps me intrigued & involved. Not clear as to how it arrived at the final resolution, but in the end it all made sense. The primary character was annoying but sympathetic and the rest of the charcters made sure the reader knew it. Liked the style very readable & on point.
Read more
One person found this helpful
Helpful
Sending feedback...
Thank you for your feedback.
Sorry, we failed to record your vote. Please try again
Report abuse
Load more international reviews

Grady Harp
5.0 out of 5 stars ‘The child had the face of a resentful teenager in the body of an undernourished ten-year-old.’
Reviewed in the United States on 9 December 2017
Verified Purchase
Florida author Dennis Anthony writes in the paranormal genre: `I think the genre is a great platform for illustrating the ways people -- living people, mostly -- love, worry, sacrifice and despair.' Having a degree in English from Kent State University and a Masters in Film Production from USC indicates he is well prepared for his new career - to date he has been gathering ideas for novels from his work as a newspaper reporter, sailor, military officer, television news producer, public relations executive and publishing company owner. His previous successful novels include DEBUNKER: INDEPENDENCE DAY, DEBUNKER: PSYCHIC STORM, DEBUNKER: SCREAM OF THE VALKYRIE along with short story collections PROWLER and AFTER THE NUTHATCH FELL. Now with SO SAYS THE RATCATCHER he is proving that these are the kinds of stories that are enjoying immense popularity just now – the paranormal world, which in some ways seems a viable alternative to the world we currently inhabit!

Now that the DEBUNKER TRILOGY is complete, Dennis presents a new series – the RICE SHANNON PARANORMAL MYSTERY series – of which RATCATCHER, BE STILL was the first installment, and SO SAYS THE RATCATCHER is the second. If there is any doubt as to the ability of Dennis to set a mood for mystery, his opening sentence dispels that: ‘October 1972 Goodwater, Ohio Barney Amos patiently explained one more time how he had killed his wife. The farmer’s voice over the phone was scratchy and uneven. Married thirty-six years … Massey Ferguson Super 90 tractor … backing up and didn’t see her. Rice Channon knew most of this from the police report, but he pressed the man for the details. Due to the lousy phone connection, they were slow in coming. Rice clamped his hand hard against his free ear to block out the newsroom noise. Meanwhile, city editor David Billard tried to get his attention. He stood next to him, snapping his fingers repeatedly, like a diner demanding breadsticks. “How did you run over her a second time, Mr. Amos? Didn’t you hear her screams?” Rice half-shouted over the phone, wincing as he spoke. As acting state editor for the Goodwater Tribune this week—circulation thirty-five thousand, daily and Sunday—he had to ask the tough questions himself. Nobody would be second guessing him or demanding more details. It was all on his shoulders. More static from the phone as the farmer considered the question. Then everything went quiet, and the connection became clear as a northern Ohio morning in July. “I was flummoxed,” he said. “Plain flummoxed.”

The synopsis is strong: ‘It was a murder so casually brutal that no one believes it actually happened. Not the police. Not the editor of the local newspaper. The paperboy who saw the crime tells the only person he trusts. That person is reporter Rice Channon, known to the police as the Ratcatcher because of his past success in identifying murderers. The cops and Channon’s boss think the boy’s claim is nothing but a case of simple hero worship. Rice isn’t so sure. His intuition and his faith in the boy’s story convince him something happened. That and his visions of spirits and angelic beings that follow the boy’s claim. The time is 1972 and society is in turmoil. Gender roles are in flux. The hippie culture is winding down. Madness may be creeping into Rice Channon’s life. Close friends are betrayed. Others die. Now an innocent woman and her son are at risk. And the Ratcatcher, tricked and sidelined, is unable to save them.

Dennis has an uncanny ability to flesh out his chosen main characters – in this case reporter Rice Channon – and in doing so he gather momentum from the beginning of his tale through to the end - associated character s just seem to blossom because of his credibility. Though the DEBUNKER trilogy was a favorite, this new series seems to be an upward step for a writer consumed by his career. Watch him grow. Grady Harp, December 17
Read more
3 people found this helpful
Helpful
Sending feedback...
Thank you for your feedback.
Sorry, we failed to record your vote. Please try again
Report abuse

Michelle
4.0 out of 5 stars Ratcatcher
Reviewed in the United States on 12 May 2018
Verified Purchase
A reporter with a twist. He sees ghosts. This is a good story that is a stand alone book, something many series don’t do. I usually don’t like series because the authors don’t finish a story in each book. This author does. Cudos! I will read more of your creative books.
Read more
Helpful
Sending feedback...
Thank you for your feedback.
Sorry, we failed to record your vote. Please try again
Report abuse

anna
3.0 out of 5 stars Book was soooo slow it took me 3 days to finish.
Reviewed in the United States on 16 April 2018
Verified Purchase
But the ending kinda sorta made up for it. Just wish it had been a little more exciting along the way.
Read more
One person found this helpful
Helpful
Sending feedback...
Thank you for your feedback.
Sorry, we failed to record your vote. Please try again
Report abuse