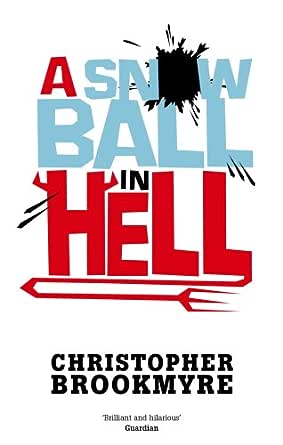 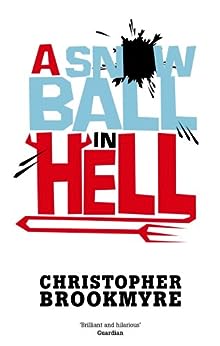 He's alive. Simon Darcourt, professional assassin par excellence, only now behaving more like an amateur serial killer with attitude. And it's up to Angelique De Xavier to bring his particular brand of mayhem to a halt.
See all Product description

Casey Sier
4.0 out of 5 stars Another classic
28 February 2013 - Published on Amazon.com
Verified Purchase
I don't think I can add anything original to the numerous rave reviews of most of Brookmyre's novels. This man knows what he is doing and I can only drop my jaw in awe at yet another great piece of writing. Sit back and enjoy!
Read more

Amazon Customer
5.0 out of 5 stars Five Stars
4 February 2016 - Published on Amazon.com
Verified Purchase
Great black humour. The solid research into the art of magic gives authenticity and charm to the novel.
Read more

Lance Charnes
4.0 out of 5 stars Fun, twisty, profane, hyper-attitudinal Tartan Noir
12 April 2016 - Published on Amazon.com
Crime novels hailing from the Northern Tier seem to take on the stereotypical national qualities of their places of origin. The Scandinoir (a term I'm desperately trying to push into the mainstream) I've read tends to feature grimly dysfunctional protagonists, tons of self-generated angst and lots of windswept gray seas -- just what you'd expect from the lands that brought us Strindberg and Ibsen. Tartan Noir, on the other hand, seems to revel in its own bad behavior; protagonists and antagonists alike have rougher edges, dirtier mouths, bigger chips on their shoulders, and more developed senses of humor (though it's usually pretty dark), as befits a nation that's spent most of the past two millennia fighting against (and usually losing to) its southern neighbor.

Take A Snow Ball in Hell, for instance.

Simon Darcourt -- a high-functioning psychopath recently made redundant from his job as freelance terrorist by the influx of so many other psychopaths willing to work for free -- has decided to better the state of British civilization by killing B-list "celebrities" in wholesale lots. He stages made-for-reality-snuff-TV extravaganzas around his exploits and dares the British public to look away, which, of course, it doesn't. The confounded police bring in mixed-race, terrorist-hunting Glasgow cop Angelique de Xavia to try to track down Darcourt again. Yes, again; she's done it before in an operation that ended in Darcourt's supposed death. As it turns out, she's not the only one hunting Darcourt, nor is he the only one she's hunting, and the hunters are hunting the other hunters as much as they're trying to flush out Darcourt. Hilarity and lots of corpses ensue.

Brookmyer, a Scot, gives the stage in turn to each of his principal characters and even a couple bit players, but his main mouthpieces are de Xavia, a bank robber/magician named Zal Innes, and of course Darcourt. As he did in Where the Bodies Are Buried , the author's able to present a credible and affecting inner life for his main female character, a "wee dark lassie" who's turned into a crack undercover investigator at the cost of her soul. Zal's a charismatic baddish boy who fell hard for Angelique during their last run-in (and she for him) and is tortured by his simultaneous needs to be with her and to stay away from her; he's a gifted magician who monetized his skills through performance-art robberies of large banks that were more crooked than the people robbing them. But the author's affection is clearly for Darcourt, whose first-person rants are so insane they make perfect sense, and whose outrage at the squalid tabloid-fueled manufacturing of disposable celebrity is so heartfelt you'll find yourself wondering why he doesn't exist in the real world. His first-chapter self-introduction is a tour de force of attitude, characterization and bravado.

The plot looks like a ball of yarn after a pack of kittens has had its way with it, which is part of the fun. You know the author's taking you somewhere, though God knows where; the tangles and switchbacks and triple-crosses are entertaining as you run across them, even though you'll lose track of who's doing what to whom a few pages later. Darcourt's plots and setups are so elaborate -- scams covering up other scams, backup plans multiple layers deep -- they remind me more of Mission: Impossible than anything that would happen in the real world, and he's not the only one. Everybody's playing three-dimensional chess in this one. This over-cleverness, paired with the over-tidiness of its ending, is one of the reasons I knocked off the better part of a star from my rating. The roller coaster's fun, but some way through I stopped believing any of it was real and just went along for the ride.

As mentioned, Brookmyre is Scottish and so are his characters, and they speak that way. You won't need subtitles, though an occasional Google lookup might be in order. A more important cultural issue (one that helped knock off that fifth star): how up-to-speed are you with 2008 British junk-celebrity lore? Characters name-drop relentlessly, assuming you know what they're talking about. I imagine that Darcourt's victims are tweaked versions of real D-listers that I'd totally recognize had only I been following the Daily Mail for the past decade. You say you open the Sun only for the Page 3 girl? Oh, dear; I'm afraid the jokes will fly right over your wee haid.

This is book three of a trilogy, a fact the book doesn't trumpet. I just thought the characters had unusually detailed (see: convoluted) backstories. You've been warned.

A Snow Ball in Hell is a fun, twisty, profane, hyper-attitudinal story that will keep you well-entertained while not hiding the fact that the author's messing with you throughout. If you've ever thrown things at your TV during X Factor, you'll love the premise. Just put your disbelief in a locked closet while you're reading and revel in the knowledge that this novel could never be set in Oslo.

Read more
One person found this helpful
Go to Amazon.com to see all 10 reviews 4.5 out of 5 stars
Get FREE delivery with Amazon Prime
Prime members enjoy FREE Delivery and exclusive access to movies, TV shows, music, Kindle e-books, Twitch Prime, and more.
> Get Started
Back to top
Get to Know Us
Make Money with Us
Let Us Help You
And don't forget:
© 1996-2020, Amazon.com, Inc. or its affiliates