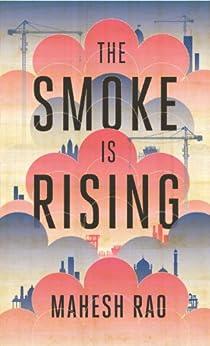 The Smoke is Rising Kindle Edition

Mahesh Rao was born and grew up in Nairobi, Kenya. He has worked as a lawyer, academic researcher, and bookseller. His work was shortlisted for the 2013 Bridport Prize, the 2012 Commonwealth Short Story Prize and the 2010 Zoetrope: All-Story Short Fiction Contest. He lives in Mysore, India. This is his first novel. www.maheshrao.info @mraozing --This text refers to an out of print or unavailable edition of this title.

Dr David Mankin
5.0 out of 5 stars Languid and charming - with delightful comic touches
Reviewed in the United Kingdom on 26 April 2014
Verified Purchase
This is an enjoyably easy-to-read novel which draws you into the lives of the main protagonists (as well as the city of Mysore itself). Although the story is very much character driven, the author effortlessly evokes life in modern-day India (a society experiencing profound social and economic changes). The author's ability to describe the sights, sounds, and smells of India is remarkable. His descriptive ability is quite stunning. This is Mahesh Rao's first novel and given its quality it surely marks the start of what will be a long and successful career as an author. I was attracted to the novel for two reasons. First, it's setting. I'm currently reading a great deal of non-fiction about India's economic rise and wanted something else to contrast this with. Second, the plot appealed. It's topical because it reflects the profound changes that are currently happening in India. Rao has a light touch; he captures nuances and gestures which lesser writers would ignore or fail to appreciate. This means that what is left unsaid is sometimes as important as what is revealed. This is very much a novel to savor in terms of prose and narrative with some wonderful humor thrown into the mix - I'll leave you to discover all about Mysore's vision of the future: HeritageLand. I would describe it as languid and charming. The story lingers on long after the last page has been read. Highly recommended.
Read more
4 people found this helpful
Report abuse

Christiane
4.0 out of 5 stars Modern India
Reviewed in Germany on 19 March 2016
Verified Purchase
The characters in Mahesh Rao’s novel set in Mysore represent different strata of Indian society. Through the glimpses into their lives that the author offers, the reader comes away feeling that only the super rich - more exactly the nouveau super rich – have some control over their destiny.

Despite the inroads of modernity in the form of India’s first rocket launch to the moon, theme parks, luxury malls, an international film festival, dieting clubs, lifestyle fads, ubiquitous advertising of “entire ranges of products that the middle classes were completely unaware that they required” and an effort to make over the city’s image into the “Geneva of the East”, everyone else is to a greater or lesser extent oppressed by the traditional evils that still plague India : the cast system, extreme poverty, sub-human living conditions, environmentalf degradation, an erratic electricity and drinking water supply, spousal abuse, etc. As if all that were not enough, Rao’s characters are suffocating under the pressure exercised by society, their own families and friends to conform to some rigid ideal of propriety. Envy, vicious slander and humiliation destroy even the most innocent attempts at happiness.

This is an intelligent, very well written novel which despite the seriousness of the subject matter is not strident and often very funny.
Read more
One person found this helpful
Report abuse

chumee
3.0 out of 5 stars Ok read
Reviewed in India on 6 March 2020
Verified Purchase
The book is beautifully written. The descriptions are good, but long-winding. Unfortunately some of them go on too long and the reader tends to lose the plot. Also unfortunate is that there doesn’t really seem to be a plot!
Just excerpts from some people’s lives during an exciting time in a small town.
Read more
Report abuse

MM
5.0 out of 5 stars Beautifully written
Reviewed in India on 4 February 2021
Verified Purchase
A beautiful group portrait of an Indian city that is not one of its big metropolises.
Read more
Report abuse

George III
5.0 out of 5 stars This is the India which the tourist doesn't see. ...
Reviewed in the United Kingdom on 3 September 2014
Verified Purchase
This is the India which the tourist doesn't see. It is a poignant story of suburban India, specifically Mysore, in transition from age old culture and customs into the 21st century. The writing, which has literary quality and is at times poetic, takes the form of vignettes of mainly only loosely related characters.
Read more
One person found this helpful
Report abuse
See all reviews
Back to top
Get to Know Us
Make Money with Us
Let Us Help You
And don't forget:
© 1996-2021, Amazon.com, Inc. or its affiliates