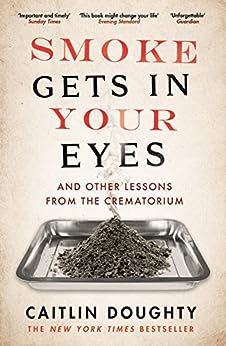 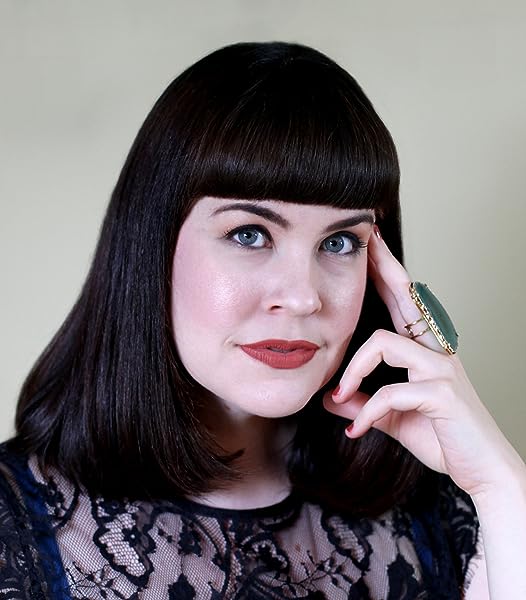 Smoke Gets in Your Eyes: And Other Lessons from the Crematorium Kindle Edition

'Unforgettable . . . a hilarious, poignant and impassioned plea to revolutionise our attitudes to death' Gavin Francis, Guardian

From her first day at Westwind Cremation & Burial, twenty-three-year-old Caitlin Doughty threw herself into her curious new profession. Coming face-to-face with the very thing we go to great lengths to avoid thinking about she started to wonder about the lives of those she cremated and the mourning families they left behind, and found herself confounded by people's erratic reactions to death. Exploring our death rituals - and those of other cultures - she pleads the case for healthier attitudes around death and dying. Full of bizarre encounters, gallows humour and vivid characters (both living and very dead), this illuminating account makes this otherwise terrifying subject inviting and fascinating.
Read more
Previous page
Next page

Caitlin Doughty takes you to places you didn t know you wanted to go. Fascinating, funny, and so very necessary, Smoke Gets in Your Eyes reveals exactly what's wrong with modern death denial. --Bess Lovejoy, author of Rest in Pieces: The Curious Fates of Famous Corpses"

Alternately heartbreaking and hilarious, fascinating and freaky, vivid and morbid, Smoke Gets in Your Eyes is witty, sharply drawn, and deeply moving. Like a poisonous cocktail, Caitlin Doughty's memoir intoxicates and enchants even as it encourages you to embrace oblivion; she breathes life into death. --Dodai Stewart, deputy editor of Jezebel.com"

[Doughty s] sincere, hilarious, and perhaps life-altering memoir is a must-read for anyone who plans on dying. --Katharine Fronk"

Caitlin Doughty is best known for her YouTube series Ask a Mortician, and she brings the same charisma and drollery to her essay collection Smoke Gets in Your Eyes. Think Sloane Crosley meets Six Feet Under After confronting mortality day in and day out, Doughty becomes more philosophical about her job. Evoking Kafka, she writes that 'the meaning of life is that it ends.' Everything must come to an end; it s just a shame this book eventually does too. --Kevin Nguyen"

Entertaining and thought-provoking. --Julia Jenkins" --This text refers to an alternate kindle_edition edition.

Mortician Caitlin Doughty--host and creator of Ask a Mortician and the New York Times best-selling author of Smoke Gets in Your Eyes--founded The Order of the Good Death. She lives in Los Angeles, where she runs her nonprofit funeral home, Undertaking LA. --This text refers to an alternate kindle_edition edition.

Caitlin Doughty is a writer and death acceptance advocate in Los Angeles, CA. She started working in the funeral industry at age 23, working as a crematory operator. This job is described in her first book, Smoke Gets in Your Eyes. Since then she has started a movement of death awareness and death positively in the Western world. She is the founder of The Order of the Good Death, and host of the Ask a Mortician webseries. She owns her own family-centered funeral home in Los Angeles. Her other books are From Here to Eternity and Will My Cat Eat My Eyeballs?

4.8 out of 5 stars
4.8 out of 5
4,684 global ratings
How are ratings calculated?
To calculate the overall star rating and percentage breakdown by star, we don’t use a simple average. Instead, our system considers things like how recent a review is and if the reviewer bought the item on Amazon. It also analyses reviews to verify trustworthiness.

Catmistress
TOP 500 REVIEWER
4.0 out of 5 stars Behind the Scenes of the Funeral Industry
Reviewed in Australia on 4 June 2017
Verified Purchase
Author Caitlin Doughty found her graduate degree of Mediaeval Studies limited help in the job market, so embarked on a career in the funeral parlour/cremation industry. This was an interest that had its origins in witnessing the accidental death of a young child, when the author herself was quite young.
The book gives all the behind-the-scenes details about which so many of us know little or nothing. Although the tone is not morbid, and indeed the book at times is quite funny, I can imagine that anyone inclined to be squeamish about the subject may be revolted by some descriptions. However, Doughty's main aim is to reduce the squeamishness and to bring the subject out into the open.
Some of the latter parts of the book dwell too much on her own personal circumstances, which is not to say I didn't find those parts interesting, just that perhaps they may have been less relevant than they ought to have been.
Four solid stars.
Read more
One person found this helpful
Helpful
Report abuse

Katt Taylor
5.0 out of 5 stars Adding my branch to the bonfire of praise
Reviewed in Australia on 12 April 2017
Verified Purchase
The best reason to read this book is, I believe, the reason Caitlin wrote it: You cannot fully accept life unless you fully accept death and we all deserve at least the opportunity to understand that fact. The next best reason is that Smoke Gets in Your Eyes is well-written, interesting and entertaining. Enjoy!
Read more
One person found this helpful
Helpful
Report abuse

Amanda J Hanrahan
5.0 out of 5 stars A timely read
Reviewed in Australia on 22 April 2015
Verified Purchase
This book helped me at my time of loss, it answered questions I had been asking myself for a while, I love the authors writing style, just academic enough to be interesting without being stodgy.
I think everyone should come to grips with dying and the business of death, and make good choices about what you really want, not just what the undertaker pushes at you!
I loved this book!
Read more
One person found this helpful
Helpful
Report abuse

Stan Murray in OZ.
5.0 out of 5 stars Well done Ms K ...
Reviewed in Australia on 16 August 2018
Verified Purchase
A fun read ... you would gladly except another 100+ Pages. Found Kaitlyn on her Web Site ... which I. am slowly working my way through those many episodes.
Read more
One person found this helpful
Helpful
Report abuse

Sarz
4.0 out of 5 stars Interesting
Reviewed in Australia on 10 May 2015
Verified Purchase
Reading about what goes on behind the scenes once one dies has always fascinated me, but once I started reading this book I was hooked!!
Every opportunity I had to read this book, it was in my hands!
It really makes you think about what you want to happen to your body once you pass away.
Read more
One person found this helpful
Helpful
Report abuse

Kristie
5.0 out of 5 stars Great book, cant put it down
Reviewed in Australia on 2 May 2019
Verified Purchase
I've read this book twice and will do it again and again. Caitlin has a way of tying together history, philosophy, medical facts and her own experience to make this a great read time and time again.
Read more
One person found this helpful
Helpful
Report abuse

Kindle Customer
5.0 out of 5 stars Love it!
Reviewed in Australia on 2 June 2018
Verified Purchase
Amazing book 😍 definitely will read again and recommend to friends and family. Fantastic view on life and death 👌
Read more
Helpful
Report abuse
See all reviews

Astrid
5.0 out of 5 stars Such an interesting insight into a career in death.
Reviewed in the United Kingdom on 3 March 2018
Verified Purchase
This book is such an interesting read. I've always wondered what goes on behind the scenes of a crematorium, and wondered why those that work with death choose to do so. This book did not disappoint.

This book does not shy away from the more difficult subjects, such as cremation of babies, the homeless, medical specimens, etc. She documents it all, and in very good fashion. There are jokes to lighten the mood, but they're tastefully done and don't take away from the subject. If you've ever wondered what goes on behind the scenes of a crematorium, this is definitely the book to read.

Alongside Caitlin's work at the crematorium, she also explores the subject of death, and the Western world's difficulty, almost avoidance of it. It's true that the majority of deaths in the Western world are all hushed up and behind closed doors, and perhaps this is what leads to a lot of peoples fear of death - lack of acceptance. It happens to us all.

I couldn't put this down. Great read, would recommend to anyone with even a slight interest in the subject of death.
Read more
26 people found this helpful
Report abuse

Jason
5.0 out of 5 stars Highly recommended account of life in something most of us know very little about
Reviewed in the United Kingdom on 21 May 2018
Verified Purchase
Not for the faint-hearted or the squeamish as the author goes in to some detail about the process of death, decomposition, embalming and, of course, cremation, especially when it goes a bit wrong! But, it's a fascinating and well-written account of the author's life with death, even if it's a little sad at times - babies die too. And let's not forget that it's a process we will all experience one day, so uncovering a little of what goes on behind the scenes when it happens is interesting, if a little unpleasant.

This is certainly not a tabloid-style, reveal-all story; it's written compassionately and with huge respect for the dead and those left behind. But it is an honest account of the author's life and times in the industry, an industry I, and I suspect most other people, know very little about.

Jem
5.0 out of 5 stars One of my new favourites!
Reviewed in the United Kingdom on 26 September 2017
Verified Purchase
One of my new favourite books! I listened to the audio book which I think really added some thing to the experience as Caitlin is a great storyteller. This book really gave me food for thought and made me think of death from a different perspective. Can't wait for her next release!
Read more
14 people found this helpful
Report abuse

JanH
5.0 out of 5 stars 'Sweeps away' the myths!
Reviewed in the United Kingdom on 5 March 2018
Verified Purchase
Thoroughly enjoyed this book - sweeps away (sorry, for the pun!), much of the misconceptions relating to dying, cremation and burial. Having worked as a cemetery administrator and in close contact with the local crematoria I am well aware of the procedures and how we 'shield' the relatives from the processes, which sometimes is good, but in the main I think most would prefer some well planned facts. I have always wanted to know more - as a child I always asked questions which my well-meaning parents tried to parry away! Good factual read with some lovely personal touches.
Read more
11 people found this helpful
Report abuse

Natty A.
5.0 out of 5 stars If you're worried about death, read this.
Reviewed in the United Kingdom on 4 March 2017
Verified Purchase
I bought this and H is for Hawk around the time my Grandad died.
Although Doughty talks about the American culture around death, I still found this an insightful & grounding book that helped me feel & work my way through my Grandad's death.
You rock Caitlin Doughty for your straight talking, humanitarian death talk. Thank you. I recommend looking at The Order of the Good Death website.

The book arrived promptly.
Read more
18 people found this helpful
Report abuse
See all reviews
Back to top
Get to Know Us
Make Money with Us
Let Us Help You
And don't forget:
© 1996-2022, Amazon.com, Inc. or its affiliates