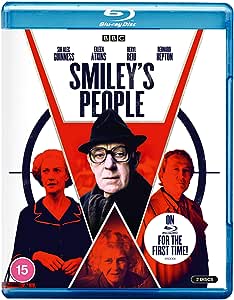 WINNER OF FOUR BAFTAS, INCLUDING BEST ACTOR AND BEST ACTRESS. FULL RESTORATION FROM ORIGINAL FILM TO BLU-RAY FOR THE FIRST TIME.

The bespectacled spymaster is once more called from retirement to come to the aid of ‘the Circus’ - and he returns with a vengeance. The murder of an émigré Soviet General, who was also a British agent, sends him digging into the past on a twisted trail across Europe that moves, inexorably, towards a final showdown with his old adversary, Karla of Moscow Centre.

4.7 out of 5 stars
4.7 out of 5
387 global ratings
How are ratings calculated?
To calculate the overall star rating and percentage breakdown by star, we don’t use a simple average. Instead, our system considers things like how recent a review is and if the reviewer bought the item on Amazon. It also analyses reviews to verify trustworthiness.

Polestar
5.0 out of 5 stars Excellent Blu-ray release of a tv classic
Reviewed in the United Kingdom on 13 November 2020
Verified Purchase
Worth waiting for. Blu-ray transfer is a clear improvement over the dvd release, which I purchased many years ago. Sharp images, good sound. Also happy to report that it is the original BBC tv broadcast without any cuts, unlike the USA- region one Blu ray which I understand had several scenes cut, such as the Hare Krishna devotee offering to help Smiley on Hampstead Heath. A worthy companion to the UK Blu ray release of Tinker Tailor.
Read more
4 people found this helpful
Report abuse

Mr Creosote
5.0 out of 5 stars Arguably the best drama series the BBC have ever made
Reviewed in the United Kingdom on 2 January 2021
Verified Purchase
Originally shot on 16mm film and arguably the best drama miniseries the BBC have yet made, Smiley's People has long been overdue a blu-ray release to upgrade the rather bogstandard DVD that's been available for many years. Unfortunately the job of restoring this leading drama was not given to the leading experts in film restoration, but to an outfit who were rather too fond of digital noise reduction. So, whilst they have gone back to the surviving film elements (which, mercifully, still existed in the BBC vaults), in many scenes they've applied such overzealous noise reduction that the picture takes on a wierd waxy, crayon-like appearance. Having said that, the quality is still an order of magnitude better than the old DVD (the latter simply using the show's transmission videotape as its source) and the quality of the actual programme is so superb that I'm still going to give this release 5 stars.
If you've never seen Smiley's People before then you're in for a treat—it's a very faithful adaption of John Le Carré's novel, a sequel to the superb Tinker, Tailor, Soldier, Spy. Nearly all the cast reprise their roles (including of course Alec Guinness—Le Carré had said that by now he was writing the books with Guinness in mind) with the notable exception of Michael Jayston as Peter Guillam, but you can't have everything. And it's made up for by appearences by from everyone to Mauren Lipman to Vladek Sheybal, with the actors playing Madame Ostrakava, Karla's daughter Tatiana and the hapless Grigoriev turning in particularly excellent performances. The soundtrack music is also particularly effective (and I see has also been given a digital and vinyl re-release to accompany this Blu-ray).

cora
5.0 out of 5 stars Excellent Spy Tale
Reviewed in the United Kingdom on 20 December 2020
Verified Purchase
This sequel to Tinker Tailor Soldier Spy is a real treat for anybody who likes John Le Carre, or Alec Guinness, or a good Cold War spy thriller. Or all three. Mind you, it's a mini-series with six episodes and a total run time of just under six hours. Which means it takes its time telling the story and fans of fast paced action thrillers may find it rather slow. Then again, the script is excellent and ,as per usual for Le Carre, the story is well constructed.

As to the cast, it's actually quite mind blowing just many familiar faces make an appearance in this. In the lead you have the great Alec Guinness, and he is excellent as ever. Among the supporting cast are such greats of British acting as Eileen Atkins, Maureen Lipman and Beryl Reid, Patrick Stewart as Smiley's adversary "Karla", a young Alan Rickman and quite a number of Bond baddies including Curd Jurgens (the arch villain from The Spy Who Loved Me), Michael Lonsdale (Moonraker) and Vladek Sheybal (that memorable chess player in From Russia With Love). All are on top of their game. All are solid. And it's a joy to watch them in such an intelligent thriller.

The DVD is fine. Picture and sound quality are absolutely adequate for a tv production from the early 80s. The 4 : 3 aspect ratio is less than ideal for modern widescreen devices, but it's the original format, so that can't be helped and should not be criticized. Subtitles are available. By way of extra features there is interview footage with John Le Carre and John Irvin.

Chunky Monkey
5.0 out of 5 stars Cold War TV Brilliance.
Reviewed in the United Kingdom on 12 January 2016
Verified Purchase
Following the events of Tinker, Tailor, Soldier, Spy, the now (re)retired Smiley is back, this time asked to investigate the death of his former contact, Vladimir. This leads him to unexpectedly cross paths again with his old adversary "Karla" of the Russian KGB and completes their story.

From 1982, this six-part drama series is widely regarded as one of the best ever made for television and you can see why; beautifully paced, with a fantastic script and superb acting all around, from a great cast. As in Tinker, Tailor...,Smiley is played by the incomparable Alec Guinness, as the immovable, inscrutable, rock around which the plot unfolds. Many of the character from Tinker, Tailor are back, played by the same actors (Bernard Hepton as Toby Esterhase, Anthony Baton as Lacon and Beryl Reid as Connie Sachs), which gives it a sense of continuity that Le Carré, of course, intended (Smiley's People, being the third and final instalment of his 'Karla Trilogy"). While there is a different Director in the chair (Simon Langton), the style, pace and feel are very similar to Tinker, Tailor, (not surprising, perhaps, given that both screenplays were written by Le Carré, himself!).
It is brilliant. Highly recommended.
The 2 DVD set contains all six episodes + interview footage with Le Carré and John Irvin (Director of tinker, tailor).

MIKE DAVIES
5.0 out of 5 stars Totally recommendable
Reviewed in the United Kingdom on 17 October 2016
Verified Purchase
A fan of Tinker, Tailor, I was not disappointed with the sequel.
A different sort of story but well-constructed and, though moving slowly like its predecessor, it again delivers a plot which twists and turns engaging the viewer throughout. You would expect nothing less from a Le Carre based screenplay.
It goes without saying that Sir Alec Guinness's Smiley is mesmerising (in a slightly different way from the previous) and inevitably the supporting cast live up to the same standard. In particular, Toby Esterhazy's new persona is fascinating but he cannot resist slipping back into type as the heat builds, at least till the denouement after which he fades again into his preferred new life.


Read more
4 people found this helpful
Report abuse
See all reviews
Get FREE delivery with Amazon Prime
Prime members enjoy FREE Delivery and exclusive access to movies, TV shows, music, Kindle e-books, Twitch Prime, and more.
> Get Started
Back to top
Get to Know Us
Make Money with Us
Let Us Help You
And don't forget:
© 1996-2020, Amazon.com, Inc. or its affiliates