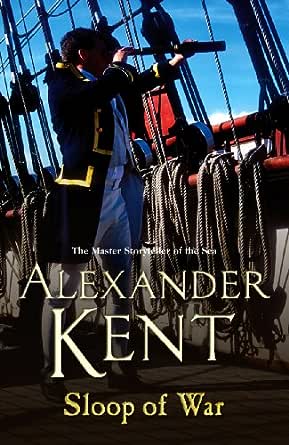 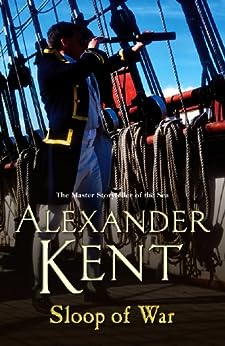 Alexander Kent is writer Douglas Edward Reeman's pseudonym. Reeman was born at Thames Ditton 15 October 1924 (age 90), is a British author who has written many historical fiction books on the Royal Navy, mainly set during either World War II or the Napoleonic Wars. Kent was the name of Alexander's friend and naval officer who died during the Second World War.

Michael Jayston is an actor best known for his roles in Nicholas and Alexandra (1971), Emmerdale (1972) and Alice's Adventures in Wonderland (1972). Michael has narrated for two well-loved British authors, John le Carré and P.D. James. Michael's recording of The Constant Gardener by le Carré picked up an Earphones Award, adding to the accolades for his handling of the British spymaster's works. --This text refers to the audioCD edition.

As the French enter the American War of Independence, young Richard Bolitho is given command of the fast, well-armed sloop Sparrow ... --This text refers to the audioCD edition.

One of our foremost writers of naval fiction * Sunday Times * --This text refers to an alternate kindle_edition edition.

Spring, 1778
The year marks a complete transformation for Richard Bolitho and his future in the Royal Navy. It is the year that the American War of Independence changes to an all-out struggle against British rule -- and the year when he takes command of Sparrow, a fast, well-armed sloop of war.
As the pace of the war increases, the Sparrow is called from one crisis to another; and when the great fleets of Britain and France converge on the Chesapeake, Bolitho must be ready to come of age in a sea battle that will decide the fate of a whole continent. --This text refers to an alternate kindle_edition edition.
Read more

4.7 out of 5 stars
4.7 out of 5
183 global ratings
How are ratings calculated?
To calculate the overall star rating and percentage breakdown by star, we don’t use a simple average. Instead, our system considers things like how recent a review is and if the reviewer bought the item on Amazon. It also analyses reviews to verify trustworthiness.

Roger Franks
5.0 out of 5 stars Another ripping yarn
Reviewed in Australia on 28 February 2019
Verified Purchase
As always Alexander Kent has kept up the pace A great story teller I found google mapping set the scene even more perfectly ,hard to put down
Read more
Helpful
Comment Report abuse

Hippo
4.0 out of 5 stars Enjoyable adventures
Reviewed in the United Kingdom on 21 December 2014
Verified Purchase
I have read the previous books in this series and it is only with this book that the series has really taken off, it is an excellent read.

I have previously read the O'Brian series and really enjoyed them, the character development and interaction is unsurpassed but it has the problem that when the series gets going the author has run out of time, he ends up stretching 1812 to about eight years.

This series is very different, I would not say better or worse but different, which makes each enjoyable in its own way. What more can I say but I look forward to seeing what happens in the coming books, happy days.

Geoff
5.0 out of 5 stars Alexander Kent
Reviewed in the United Kingdom on 18 December 2014
Verified Purchase
The Bolitho stories really are up there with better known seafaring adventures from Forrester and O'Brien.
Personally I think Alexander Kent knocks spots off O'Brien.
My one criticism is that you get a chronology at the beginning of each book so I already know roughly how the series ends even though I am only part way through.
On the plus side it is easy to keep track of where you are in this outstanding series.

Malvolio O
4.0 out of 5 stars Sailor for a Sailor
Reviewed in the United Kingdom on 19 April 2015
Verified Purchase
I spent a year away from home and got thoroughly into the Bolitho stories and "Sloop of War" was one of my favourites that got me hooked - in fact I think it was the first I read. This purchase was for Caroline - a friend who enjoys O'Brien and is now enjoying the Bolitho series - and she does sail a 72 foot two master herself for the Ocean Youth Trust.
Read more
Report abuse

Senta410
5.0 out of 5 stars 2nd time round and its just as good
Reviewed in the United Kingdom on 26 July 2013
Verified Purchase
I like Kent's really perceptive viewpoint of someone making his way up the Command ladder in a disciplined Service. I have genuinely shared some of the misgivings and the feelings depicted by the author in Bolitho of someone left holding the responsibility and expectation of success with the pressures from above below inside and outside the organisation. Bin there done that !

Kindle Customer
5.0 out of 5 stars More derring-do
Reviewed in the United Kingdom on 24 February 2018
Verified Purchase
Don't get too fond of any of the secondary characters in the Bolitho books, because it's odds on that something unpleasant will happen to them. Great book though.
Read more
Report abuse
See all reviews
Get FREE delivery with Amazon Prime
Prime members enjoy FREE Delivery and exclusive access to movies, TV shows, music, Kindle e-books, Twitch Prime, and more.
> Get Started
Back to top
Get to Know Us
Make Money with Us
Let Us Help You
And don't forget:
© 1996-2020, Amazon.com, Inc. or its affiliates