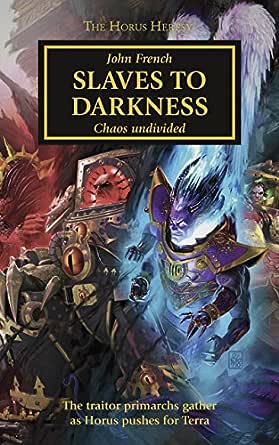 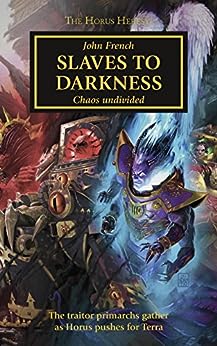 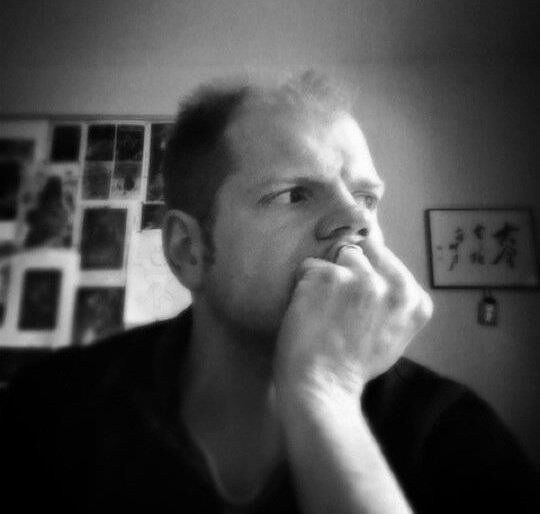 After a long and gruelling conflict, the traitors at last close upon Terra. But time is dwindling for an attack. Both Guilliman and the Lion are returning with all haste, and their armies could turn the tide. The hosts of the Warmaster must unite, for only then can they attack the Throneworld itself. While Mortarion is sent on ahead as the fleet’s vanguard, it falls to Lorgar and Perturabo to marshal Fulgrim and Angron, both now elevated to daemonhood and perhaps beyond even the will of the Warmaster to command. But Horus lies wounded and as the greatest battle the galaxy has ever know looms, it is up to Maloghurst to hold his fractious Legion together and to wrench Horus himself from the edge of oblivion.

The time is nearly here… but first, the events of Wolfsbane have left Horus in a bad way, and now we get to take a look at the inner workings of the Traitor fleet as it threatens to fall apart.

John French is the author of several Horus Heresy stories including the novels The Solar War, Praetorian of Dorn, Tallarn and Slaves to Darkness, the novella The Crimson Fist, and the audio dramas Dark Compliance, Templar and Warmaster. For Warhammer 40,000 he has written Resurrection, Incarnation and Divination for The Horusian Wars and three tie-in audio dramas – the Scribe award-winning Agent of the Throne: Blood and Lies, as well as Agent of the Throne: Truth and Dreams and Agent of the Throne: Ashes and Oaths. John has also written the Ahriman series and many short stories.
click to open popover

Kindle Customer
4.0 out of 5 stars Good read
Reviewed in the United Kingdom on 20 August 2018
Verified Purchase
Very interesting look at the way that the forces of Horus have changed since they turned. Quite liked the interactions between Primarchs that haven't really been seen together before.
My only issue was that jumping between so many different characters sometimes broke the flow of the story, although given the theme of Chaos I can imagine this as a deliberate device.
Overall a very good book, and now the stage is set for Terra..

Daltone
4.0 out of 5 stars John French does it again
Reviewed in the United Kingdom on 27 May 2019
Verified Purchase
John French once again manages to provide an entertaining trip through the realms of Chaos, making the antagonists believable and sympathetic.

The end is nigh. If John French is involved it's going to be good.

Mr R J SHEARDOWN
5.0 out of 5 stars Getting there
Reviewed in the United Kingdom on 3 September 2018
Verified Purchase
Penultimate book of the Heresy series; another fantastic read. One or two little twists never before mentioned. Bring on the next.
Read more
Helpful
Sending feedback...
Thank you for your feedback.
Sorry, we failed to record your vote. Please try again
Report abuse

clive
5.0 out of 5 stars Worth reading
Reviewed in the United Kingdom on 18 May 2019
Verified Purchase
Great book, another good book in the Warhammer 40K series
Read more
Helpful
Sending feedback...
Thank you for your feedback.
Sorry, we failed to record your vote. Please try again
Report abuse

Dani
4.0 out of 5 stars Oh Lorgar, how far you have dissapointed everyone
Reviewed in the United States on 9 January 2019
Verified Purchase
Lorgar, Lorgar, Lorgar. I won't say much to not spoil the ending but *sighs* Lorgar, how far you have fallen in the glory and admiration of the writers and community.
The story is fine, not too exciting but we do get glimpses of just how badly the traitor legions have bled trying to usurp the emperor, and why Horus took such a massive gambit in the final siege of Terra, why such recklessness had to be employed, they simply lost too much, as much as the loyalists.
The pacing and dialogue is fine. Nothing is TOO amazing nor eye rollingly cringy.

Oh, Lorgar, how sweet it is to see you get exactly what you deserve.

S. Henry
5.0 out of 5 stars Long term Horus Heresy Fan - This is one of the good ones!
Reviewed in the United States on 9 October 2018
Verified Purchase
I've not read all of the HH series but I've read close to 30 of the novels. Some of them are snoozers I can't make it through and read the wiki, others are fine and I drag myself through. A few are absolute can't-put-down read in 2 days. This is maybe not in the top tier but it's solidly in B/B+ range. You learn a lot more about the grip of Chaos and the story moves forward. Lots to enjoy.
Read more
2 people found this helpful
Helpful
Sending feedback...
Thank you for your feedback.
Sorry, we failed to record your vote. Please try again
Report abuse
Load more international reviews

burak yï¿½ksel
3.0 out of 5 stars Swing and miss..
Reviewed in the United States on 25 March 2020
Verified Purchase
I had very high hopes for this book. A muster with all traitor forces, nearly all traitor primarchs with Horus as the main protogonist. These made me hope.

The book makes promises but never delivers. You think something will happen, author builds up to it but nothing out of ordinary happens. Every character behaves like you expect them to be.

The only interesting point of the book is Lorgar’s scheme. You may skip this one.
Read more
Helpful
Sending feedback...
Thank you for your feedback.
Sorry, we failed to record your vote. Please try again
Report abuse

steve
4.0 out of 5 stars A decent read
Reviewed in the United States on 24 August 2018
Verified Purchase
While the main plot thread in the book is kinda boring I found myself very interested in the side story involving the Iron Warriors holding the line and fighting while low on resources it was an interesting perspective of the war that I feel hasnt really been represented in the other books.
Read more
3 people found this helpful
Helpful
Sending feedback...
Thank you for your feedback.
Sorry, we failed to record your vote. Please try again
Report abuse

Diogenes
4.0 out of 5 stars Good Look At The Heretics
Reviewed in the United States on 8 June 2019
Verified Purchase
A very good examination of the forces of Horus and their internal struggles. At first I didn't think I'd like a whole book about the "bad guys", but it didn't take long for the story to capture me. A good read that fills in a lot of missing information of Horus' side of the saga. Must read for HH fans.
Read more
Helpful
Sending feedback...
Thank you for your feedback.
Sorry, we failed to record your vote. Please try again
Report abuse

Matthew E Melley
5.0 out of 5 stars Best so far
Reviewed in the United States on 12 December 2019
Verified Purchase
Arguably the best Traitor Legion novel in the Horus Heresy so far, in my opinion.
Read more
Helpful
Sending feedback...
Thank you for your feedback.
Sorry, we failed to record your vote. Please try again
Report abuse