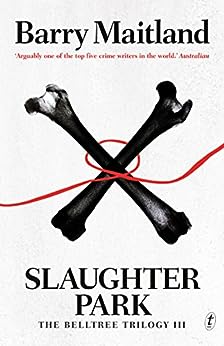 'The Belltree novels are almost hypnotically compelling--impossible to look away from, despite the violence on view. Readers unfamiliar with the first two parts of the trilogy may want to start with them before reading this one, which picks up on important plot threads first spun earlier. Up-to-speed readers, however, will be thrilled to get this finale in their hands at last and even more excited as they read it. A stunning conclusion to a remarkable trilogy that deserves a much wider audience than it has so far garnered.'--Booklist [STARRED]; 'The stirring conclusion to Ned Kelly Award-winner Maitland's Belltree trilogy...Fans of hard-hitting crime fiction will be sorry to see the last of Harry.'--Publishers Weekly; 'Well written with an elaborate plot, this fast-paced novel explores some aspects of the racial divide in Australia. Recommend for Claire McNab readers or anyone who likes police procedurals.'--STARRED review, Library Journal on Crucifixion Creek; 'Unlike the 12 cases Maitland set Kolla and Brock, this one expresses its moral complications through nonstop action. First of a series. Though you'll wonder early and often how Harry can possibly survive for any sequels, you'll hope again and again to be proved wrong.'--STARRED Review, Kirkus, on Crucifixion Creek; 'Maitland adroitly balances multiple characters and plot lines, weaving together apparent coincidences into a complex, compelling tale of far-reaching greed and corruption. Armchair travellers will enjoy this foray Down Under, and the heart-wrenching ending is sure to leave them eager for the trilogy's final volume.'--Publishers Weekly on Ash Island; 'Satisfyingly rich fare for puzzle addicts and conspiracy theorists alike, capped by a string of climactic fireworks that are still exploding in the very last paragraph.' Kirkus on Chelsea Mansions; 'Meticulous, psychologically astute.' Entertainment Weekly on No Trace 'Maitland interweaves a smart plot, which includes a few shockers and more than a few Cold War roots, with major character developments for Brock and Kolla... A top-notch series.' Richmond Times-Dispatch; 'Intriguing and cleverly constructed.' Booklist --This text refers to the paperback edition.

The jaw-dropping finale to the Belltree Trilogy, Slaughter Park is Australian hard-boiled crime fiction at its best. --This text refers to the paperback edition.

Barry Maitland was born in Scotland, studied architecture at Cambridge University and went on to work as an architect and urban design expert. In 1984 he moved to Australia to head the architecture school at the University of Newcastle in New South Wales. In 1994 The Marx Sisters, the first in his Brock and Kolla crime series, was published. Barry now writes fiction full time. He is published throughout the English-speaking world and in translation in a number of other countries, including Germany, Italy, France and Japan. He lives in the Hunter Valley. --This text refers to the paperback edition.
Read more

Peter Anderson
4.0 out of 5 stars Very good book and trilogy - recommended
Reviewed in Australia on 7 August 2017
Verified Purchase
My rating is actually 3.5 stars but you can't do a half star. For the whole series I would like to give a 5 star rating but this last book, I feel, is not as well done as the first two, so 4 stars for the Belltree series.

Like the first two books Slaughter Park is a riveting read. By this stage we are "good friends" with the main characters, especially Harry Belltree and Kelly Pool.

I tend not to go over the plot line of books I read, that's for you to do if you buy this book. Instead, I like to look at the characterisation and the quality of the story telling.

Barry Maitland is a master at good characterisation. Across this series and in his Brock and Kolla books he demonstrates these skills.

Story telling is Barry Maitland's other strength. I don't intend to discuss the plot in detail but Harry's Bondi caper just seemed totally out of character for him and this small part of the story contributed nothing to the overall storyline, it was unnecessary and annoying. Then there's the wrap-up finale which again seems contrived and while it might've been useful for Harry's family tree, it was not necessary here, especially the way it just "flops out" and wraps up everything neat and tidy.

Despite these criticisms I would still recommend this book but only as part of the series. Crucifixion Creek could be read as a standalone novel but not the other two books, they need to be read as a series.

Thank you Mr Maitland, I really did enjoy the Belltree series.

Kindle Customer
2.0 out of 5 stars A bit disappointing
Reviewed in Australia on 15 February 2017
Verified Purchase
As a fan of Barry Maitland I found this series a bit of a let down. Too many incredible last minute savings from dire danger through some miraculous event. Too much pointless violence and very little mystery. Lots of action but lacking any real intellectual challenge. Hope he gets back to the old style books that he was so good at.
Read more
Helpful
Report abuse

Sandra Longmore
5.0 out of 5 stars Absolutely Fabulous
Reviewed in Australia on 10 October 2016
Verified Purchase
This culmination of the Belltree Trilogy, owas riveting and moved along at a 'fair clip'. It skilfully drew morsels of clues together to come to form a great cohesive, masterful and totally unexpected conclusion. Well done Barry, can we expect another Australian series in the future?
Read more
Helpful
Report abuse

Frank R
5.0 out of 5 stars Great series
Reviewed in Australia on 13 November 2016
Verified Purchase
A great series, that highlighted the Australian context. Barry Maitlands writing about the Sydney suburbs and surrounds wasauthentic and enjoyable reading. I would highly recommend the trilogy
Read more
Helpful
Report abuse

Amazon Customer
5.0 out of 5 stars A satisfying conclusion
Reviewed in Australia on 6 November 2016
Verified Purchase
Maitland maintains the dramatic tension as the now familiar characters play out the final act of this spell binding trilogy. A surprise finish draws the disparate threads together, though one wonders whether the core characters will leave to see the conclusion.
Read more
Helpful
Report abuse

Amazon Customer
5.0 out of 5 stars Five Stars
Reviewed in Australia on 2 November 2016
Verified Purchase
The third book of this trilogy is just as good as the previous 2
Read more
Helpful
Report abuse

Jacqueline
4.0 out of 5 stars Hard to put down. ..like the whole trilogy has been.
Reviewed in Canada on 26 August 2019
Verified Purchase
I'm thrilled to have found this author and love his characters. I started out reading the Brock and kolla series, but can't find the third one on ebook, so moved to this trilogy instead and read all three back to back. ..I barely remembered to eat! Excellent read!
Read more
Report abuse

David
5.0 out of 5 stars Breathtaking climax to a trilogy of crime novels.
Reviewed in the United States on 12 October 2016
Verified Purchase
Barry Maitland - Slaughter Park

This is the third and final novel of the Harry Belltree series by author Barry Maitland. And “Slaughter Park” takes us to the heart of the mysteries that were never concluded in the first two novels - “Crucifixion Creek” and “Ash Island”.

Harry Belltree is no longer an active member of the NSW Police Force Murder Investigation Team. In this novel he once again links up with reporter Kelly Pool to investigate a series of horrific murders in Slater Park - nicknamed by the media as “Slaughter Park”. They are both also trying to find out why Harry’s wife, Jenny has seemingly abandoned their baby daughter with her sister, why she has disappeared and why she is a suspect of a murder in the Blue Mountains, west of Sydney. It isn’t long before there are indicators that the Slaughter Park murders, Jenny’s disappearance and suspicion of murder, and the suspicious death of Harry’s parents in a car crash are all linked.

By reading the first two novels in this trilogy we know that Harry, as an ex-Special Forces soldier who served in Afghanistan, will cross the line into criminal acts if he thinks it will help him solve other crimes. In this novel there is one crime that Harry carries out to protect innocent people that beats all the earlier ones.

This is another exciting, eye-boggling, page-turner of a novel by Barry Maitland. Harry confronts and is confronted by corrupt politicians, corrupt police, more bikies, vicious killer dogs, the mysteries of a plane crash as well as that of his parents, Aboriginal issues around stolen generation activity, and much more. Stand by for a roller coaster ride.

In the end Maitland satisfactorily resolves all the outstanding mysteries and crimes. In my opinion this is a brilliant trilogy of crime fiction writing. But as I did in my review of “Ash Island”, let me encourage you to read these books in order - first “Crucifixion Creek”, then “Ash Island” before “Slaughter Park”, or else it will be like coming in halfway through the film with no idea what has already happened or how each character is involved.
Read more
Report abuse

Ms P. Hall-johnston
5.0 out of 5 stars Brilliant
Reviewed in the United States on 13 March 2017
Verified Purchase
A long time since I have enjoyed a book in Australian setting. This was riveting from the start, all characters easy to relate to. Enough intrigue and twists and turns to keep turning the page, great ending.
Read more
Report abuse
See all reviews
Back to top
Get to Know Us
Make Money with Us
Let Us Help You
And don't forget:
© 1996-2021, Amazon.com, Inc. or its affiliates