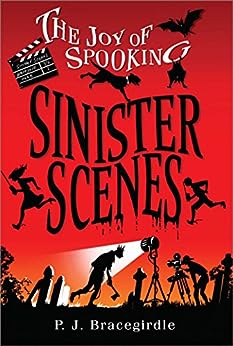 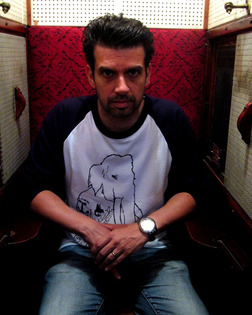 P.J. Bracegirdle has done everything from tending the stage door of a haunted old Scottish theater to pushing laundry carts through dark tunnels under an insane asylum. His last job involved writing thick manuals that nobody really read for products that few people ever used. He lives with his son and wife, illustrator Susan Mitchell, in Montreal--a spooky old town with a cemetery at the summit. For more information, visit PJBracegirdle.com and JoyofSpooking.com. --This text refers to the hardcover edition.

Kat Heckenbach
4.0 out of 5 stars Great finish to a favorite series
Reviewed in the United States on 29 October 2014
Verified Purchase
I'm giving this four stars because all the things I loved about the other two books are still there. The characters, particularly Joy and Mr. Phipps, are so quirky and dark. The whole book is quirky and dark. I find myself smiling the whole time I'm reading, and I just want to visit Spooking and hang out with Joy. The author did a great job through the entire series making the characters consistent and full of life, and the town of Spooking as well. And of course, the E.A. Peugot thread going on.

The concept of this one is different, too. A horror movie being filmed in Spooking, and Joy getting the lead part when the lead actress goes missing in a graveyard--love it. Teddy Danger is in the movie as well, and, well, let's just say that he gets a little carried away. Mr. Phipps is up to his usual doing the wrong thing for the sort-a right reasons, and making you irritated yet totally sympathetic at the same time.

What made me knock off a star though: the sentence structure issue I had in the last book about drove me nuts in this one. I didn't detail it out before, and I won't now because it probably won't be noticed by most readers, so why plant it in your head, eh? But for me, urgh. No, I didn't take off a star for that last time, but this time it's combined with a massive info-dump about 2/3 of the way through the book. I won't spoil it for you--and yes, it was a twist I hadn't really seen coming--but when it did come, it was just told. For pages, just told. There really needed something breaking it up, and making it more interactive as this was a major revelation.

Anyway, I still, wholeheartedly, recommend this series. I know I'll be reading it again.

Allison M. Campbell
5.0 out of 5 stars A Last Bit of Joy
Reviewed in the United States on 6 September 2011
Verified Purchase
As the third and final installment of the JOY OF SPOOKING trilogy opens, Joy Wells is haunted by an inexplicable recurring nightmare. "Even if her fears about graduating were the cause, it still didn't explain the dream itself. What could plummeting into the sea possibly have to do with heading off to junior high?" Could junior high be any more terrifying than Joy's experiences in the delightfully creepy town of Spooking, which she is sure inspired famed classic horror author E. A. Peugeot? It seems likely that Joy's dream has a more disturbing source, and one closer to home.

SINISTER SCENES unfolds against the backdrop of an adaptation of an E. A. Peugeot story being filmed right in Spooking. It's a toss-up whether the disappearance of its young star or the upcoming school dance holds more horror:

"'What do you mean I have to go?' Joy demanded. 'Why?'
'Because if you don't, you'll regret it for the rest of your life,' Mrs. Wells warned gravely.
Joy looked at her mother, wearing a pensive expression. Since Joy was already hoping for an unnaturally long life, she had to weigh the possibility seriously, she decided. So she began picturing herself as a housebound old woman, bitterly wishing she had shaken her booty in a hot gymnasium with people she considered mostly bullies and bozos.
It just didn't seem likely."

Seriously, Bracegirdle cracks me up.

Joy is possibly the last child in literature I'd expect to become obsessed with being in a movie (and I mean that as a compliment), but her abiding love of Peugeot makes her excitement in accepting the lead role seem natural. She is not initially excited about the movie, since rumor has it that the movie includes vampires AND zombies "...the two monsters even Joy couldn't stand lately, mostly because every girl at Winsome had somehow come under the impression that they made good boyfriends. Pale and pensive with six-packs, they craved not blood and brains apparently, but chocolate and kisses. Joy was outraged. What was happening to the world?"

Precocious Joy is a horror fan who prefers to dress up in the clothes of her house's former occupant, adventurer Melody Huxley. As the series has progressed, she has moved from singular loathing of everything Darlington to finding its good points, even making a Darling friend, but she has remained wholly herself. She still sees ghosts and monsters everywhere (because in Spooking, they ARE everywhere), and her sometimes misguided Gothic sensibilities add to the series' dry humor, but she is undeniably becoming more complex and less of a self-imposed outcast. She relishes her movie role with enthusiasm she once reserved exclusively for the macabre. But there is plenty of the macabre to be had during filming. Rock star and mediocre actor Teddy Danger, haunted by the creepy mansion that is his home-away-from-home during filming, undergoes a radical transformation.

Will Joy finally prove that Spooking was the home of E. A. Peugeot? Will she find out the fate of Melody Huxley? Will she even survive the trilogy? Good heavens, you don't think I'd tell you any of THAT, did you? Get thee to a bookstore!

I highly recommend starting Joy's adventures at the beginning, with FIENDISH DEEDS followed by UNEARTHLY ASYLUM. Although a Spooking novice could follow SINISTER SCENES as a standalone, there is so much character development (especially with the series villains, who become satisfyingly nuanced) throughout the trilogy, that skipping the first two installments denies you an abundance of backstory.

NightShifter
5.0 out of 5 stars wonderfully fantastically amazing
Reviewed in the United States on 21 September 2013
Verified Purchase
I loved all 3 books I recommend it to all who love horror and mystery stories. Simply wonderful. I will read it again and again and again. :)
Read more
Report abuse

Kindle Customer
5.0 out of 5 stars Thrilling
Reviewed in the United States on 20 September 2014
Verified Purchase
just the right amount of fear and story. Wonder setting and feeling around it that made me want more books in the series.
Read more
Report abuse
See all reviews
Back to top
Get to Know Us
Make Money with Us
Let Us Help You
And don't forget:
© 1996-2021, Amazon.com, Inc. or its affiliates