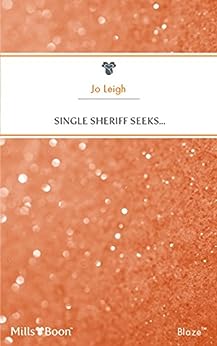 by Jo Leigh (Author) Format: Kindle Edition
See all formats and editions
Sorry, there was a problem loading this page. Try again.

Bachelor of the month Dan Collins
This sexy single sheriff has been set up! The entire town of Harlen, Texas, is playing matchmaker and Dan hasn't a clue!

Annie Jones had to admit Dan's personal ad in Texas Men was appealing. And everybody in town welcomed her warmly when she arrived except Dan. He was wary, almost skittish. Until Annie was suddenly the prime suspect after several valuable Barbie dolls went missing!

Dan was on the bizarre case pronto, sticking to Annie like glue. The gorgeous, green–eyed blonde couldn't possible be the doll thief. But Annie sure had stolen his heart!

Award-winning author and screenwriter Jo Leigh began her career in 1975 as a reader in the Comedy Development department for 20th-Century Fox. She left Fox in 1977 to go on location with The Deer Hunter. She then worked as an auditor, associate producer, and producer on such projects as When She Says No for CBS, Beulah Land for NBC, Great American Traffic Jam for NBC and Clan of the Cave Bear for Jozak Productions. In 1987 she became head of development for the McCarron Film Corp., overseeing a roster of 12 feature films.

As a screenwriter, she's had a series idea purchased by Cinemax, and has worked as a script consultant on more than 50 screenplays. Currently, her screenplay Apache Tears is in development with Northern Lights Productions in Canada.

Jo also teaches writing in two-day workshops across the country, and is a frequent guest speaker at writing conferences. Her tape on Advanced Plotting from the Dallas Romance Writers of America conference is the bestselling tape in RWA's history.

Her first Silhouette novel, Suspect, was awarded Best First Series Book by Romantic Times Magazine, garnered the 1994 Romance Writer of the Year award from Pike's Peak RWA, and was a finalist for Best Romantic Suspense Novel of 1994 by Romance Writers of America.

Her first Temptation novel, One Wicked Night, was a finalist for Best Short Contemporary Novel of 1998 by Romance Writers of America.

Jo currently writes for Harlequin American, Intrigue, and Harlequin special series. She lives in Nevada with her three enormous cats, Zeke, Coco, and Molly. You can reach her at her website shown above. --This text refers to the paperback edition.