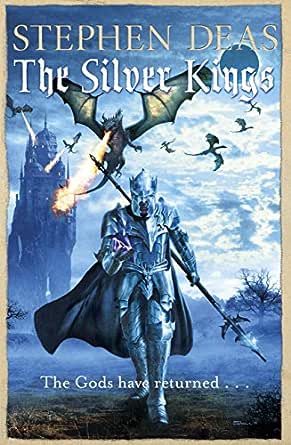 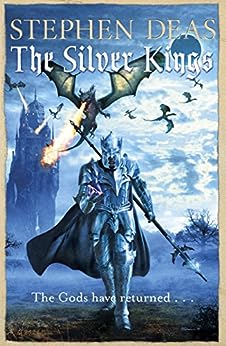 You will also find magically flying ships, enchantresses who can mould 'gold glass' to their will and alchemists all playing a part in this action filled story of discovery (Nerdly.co.uk)

Stephen Deas was born in 1968. He once set fire to Wales. Well one bit of Wales. Twice. When not burning principalities, he played too much D&D. Despite this he managed to study theoretical physics at Cambridge, get a job at BAE, marry and have two children. He has written several novels in the fantasy, YA and crime genres. With Gavin Smith he co-writes SF novels, including a tie-in for the Elite Dangerous game. He lives in Essex with his family.

The shocking conclusion to the bestselling series that began with THE ADAMANTINE PALACE. Worlds fall, cities die, and the dragons rise...
Read more
click to open popover

Rey Franklin
4.0 out of 5 stars A great end to a great series.
Reviewed in the United States on 18 July 2016
Verified Purchase
So after the last 5 years of me reading this series, starting with "The Adamantine Palace" and now on the 7th and final book of this series, I am sad to see it end. The ending is "bitter sweet" as it should be for a series of 10 books (I didn't read the three that dealt with the development of the Thief Taker's Apprentice) that amazed me.

This story takes off where The Splintered Kings left off, the Eyie of Baros Tsen T'Varr has fallen into the dreaded storm dark and now Zafir and her crew go on wild adventures through out he worlds lead by the crazy half god, "The Black Moon." They of course make it back to the Realm of Dragons where the Dragons now rule and the realm lies in ruins. Zafir has to deal with the consequences of her and Jehal's scheming from The Adamantine Palace and The King of the Crags. The few humans left alive (some surprises) are bitter and angry at her for what she did. She has to mature, and she has to make alliances with enemies and dragons to stop the Black Moon or there will be no future for anyone.

The story ends up in a big battle, but not too big, there are times because the pacing is do different than "The Splintered Gods" that you do get lost in the story especially when it goes into the Black Moon's mythology. There are times where it seems heroes die and they do and sometimes they aren't dead yet.

It was a great series and a great story about the planet I call, "The Splintered Earth." The author takes great care to resolve some things, leave some things unresolved and leave the reader to wander about other mysteries.

Karen Carter Bell
5.0 out of 5 stars It pleases me.
Reviewed in the United States on 8 June 2017
Verified Purchase
A good addition to the series.
Read more
Helpful
Sending feedback...
Thank you for your feedback.
Sorry, we failed to record your vote. Please try again
Report abuse

Amazon Customer
5.0 out of 5 stars Love this book!
Reviewed in the United States on 29 August 2015
Verified Purchase
Have loved this series since the very first book. After reading The Silver Kings it was mind blowing and amazing. The dragons are epic and the characters are awesome. Normally hate seeing the ends of series, but this one had a perfect ending.
Read more
Helpful
Sending feedback...
Thank you for your feedback.
Sorry, we failed to record your vote. Please try again
Report abuse