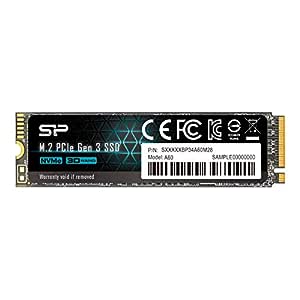 Capacity: 1TB A60
The P34A60 is an affordable storage solution that doesn't skimp on performance. It's designed for novice users, DIY system builders, purpose-built system manufacturers, and simply those who are looking to upgrade their PC. But with a PCIe Gen3x4 interface, which means four lanes are used for transmitting and receiving data simultaneously, read speeds up to 2,200 MB/s, and write speeds up to 1,600 MB/s, this SSD is anything but basic. The P34A60 supports NVMe 1.3, which demands better performance vectors than AHCI (Advanced Host Controller Interface), including scalable bandwidth, increased IOPS, and low latency. In addition, HMB (Host Memory Buffer) architecture, which allows the host driver to allocate system memory (RAM) for exclusive use by the SSD, results in higher efficiency. It's this teamwork that provides optimum performance.

T. K.
5.0 out of 5 stars Blazing fast at a reasonable price
13 April 2019
Capacity: 512GB - PCIe NVMe Gen3x4Verified Purchase
This M.2 NVMe drive uses 3D Toshiba TLC NAND with a Phison E12 controller (similar to what's inside a Corsair MP510 or Seagate Firecuda/Barracuda 510) which is already a leg up on QLC based drives (i.e. Intel 660 or Crucial P1) as speeds with QLC drives really drops off as it fills. TLC tends to also have higher endurance compared to QLC alternatives albeit no TBW was given for this product, just a pretty hefty 5 year warranty. Difficult to find something that can match the performance per dollar.
Read more

The reason for deducting one star is cause it really seems to struggle when I'm doing something really I/O intensive (especially when it's dealing with a lot of tiny files) to the point where my laptop froze for like 30-40 seconds. Now, this was with Visual Studio compiling a C++ application with Matlab being installed in the background and the system utilising the page file, as the RAM usage exceeded the total available 'system RAM'. But I'm not installing Matlab everyday and the reason I'm complaining here is because my old 256GB Toshiba THNSNK256GCS8 was able to handle similar workload without freezing, albeit the system was really slow...but usable. Neither of the SSDs were more than 40% filled, and I do TRIM occasionally.

I won't be posting a CrystalDiskMark test because I'm using an XPS 13 9360 and it's M.2 slot is limited to PCIe x2, hence the laptop won't be able to push it further than ~1850-1900MB/s for sequential reads/writes. But if you look at the Anandtech review for the SSD, the 1TB variant performs fairly close to the 970 EVO in quite a few workloads, and even better in a couple.

TL;DR: Great value as long as you're not trying to push it beyond it's limits.
Read more
4 people found this helpful
Helpful
Comment Report abuse

Tony Austin
5.0 out of 5 stars Nice and fast, installed flawlessly
11 December 2019
Capacity: 1TB A60Verified Purchase
Installed without any issues whatsoever into the second NVMe SSD slot on my system's motherboard. The C: drive in the primary NVMe slot is an older 500GB NVMe card, more than sufficient for Windows 10 and all applications, with room to spare and simple to back up daily via Acronis True Image.

This new Silicon Power SSD now gives the C: drive some respite by taking over the role of handling all miscellaneous intensive work (such as zip file downloading/extracting). It is is noticeably faster than the SATA SSD that it has replaced which I've now configured to be a portable drive for videos to plug into the USB slots an my various set top boxes

Ben
5.0 out of 5 stars Happy with drive so far
1 November 2019
Capacity: 512GB - PCIe NVMe Gen3x4Verified Purchase
Speedy delivery and it now setup in my PC. Drive operates very quickly. I've had no issues with it. Looking at buying a 1TB version when they go on sale to load my games onto
Read more
2 people found this helpful
Helpful
Comment Report abuse

Adam
5.0 out of 5 stars Dangalang would you look at that value
12 January 2020
Capacity: 1TB A60Verified Purchase
Wowie! What a great price and man I have had trouble doing clones from a mechanical to a SSS/NVME before but for some reason (was going to take another 15 days for my USB NVMe enclosure to come) I transfered my C: drive from my 860 Evo NVMe to a 509gb USB external then from that to the 1tb NVME took no longer than 20m and it booted windows first go. Great value had no problems so far.
Read more
Helpful
Comment Report abuse

Justin chee
5.0 out of 5 stars The speed of this SSD
6 November 2019
Capacity: 1TB - PCIe NVMe Gen3x4Verified Purchase
I can't believe it, it seems to be faster than my Samsung pm981. (both are running at PCI-E 3.0 X4)
On the left is Silicon Power, and on the right is pm981.
I hope that customers service is as good as SSD.
Read more

One person found this helpful
Helpful
Comment Report abuse
There are 50 customer reviews and 64 customer ratings.
See all 50 customer reviews
Write a customer review
Get FREE delivery with Amazon Prime
Prime members enjoy FREE Delivery and exclusive access to movies, TV shows, music, Kindle e-books, Twitch Prime, and more.
> Get Started
Back to top
Get to Know Us
Make Money with Us
Let Us Help You
And don't forget:
© 1996-2020, Amazon.com, Inc. or its affiliates