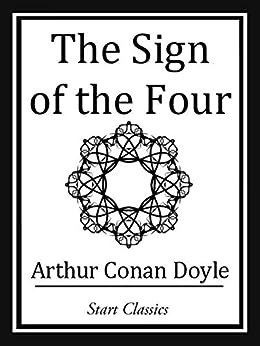 Perhaps the greatest of the Sherlock Holmes mysteries is this: that when we talk of him we invariably fall into the fancy of his existence (T. S. Eliot) --This text refers to an alternate kindle_edition edition.

At the farthest reaches of the British empire, four men swear an oath to keep a terrible secret, a secret drenched in blood which is the key to immense wealth. In order to unlock the secret, Holmes and Watson accompany a beautiful young woman on a quest which leads them through the dark heart of London to a one-legged man, a mysterious and terrifying creature, and an incredible tale of greed and revenge. A lavish BBC dramatization featuring Clive Merrison and Michael Williams in the classic partnership of Holmes and Watson. --This text refers to an alternate kindle_edition edition.

Arthur Conan Doyle's second Sherlock Holmes novel is both a detective story and an imperial romance. Ostensibly the story of Mary Morstan, a beautiful young woman enlisting the help of Holmes to find her vanished father and solve the mystery of her receipt of a perfect pearl on the same date each year, it gradually uncovers a tale of treachery and human greed. The action audaciously ranges from penal settlements on the Andaman Islands to the suburban comfort of South London, and from the opium-fuelled violence of Agra Fort during the Indian 'Mutiny' to the cocaine-induced contemplation of Holmes' own Baker Street.

This Broadview Edition places Doyle's tale in the cultural, political, and social contexts of late nineteenth-century colonialism and imperialism. The appendices provide a wealth of relevant extracts from hard-to-find sources, including official reports, memoirs, newspaper editorials, and anthropological studies.

Sir Arthur Conan Doyle was born in Edinburgh on May 22, 1859. He was a physician and writer, most noted for his Sherlock Holmes books, which are generally considered a major innovation in crime fiction. Conan Doyle had 2 children with his first wife, Louise Hawkins, who died in 1906. He went on to marry Jean Lackie, with whom he had 3 more children. He died of a heart attack in 1930. Visit the official web site of the Sir Arthur Conan Doyle Literary Estate at www.sherlockholmesonline.org. --This text refers to an alternate kindle_edition edition.

'... it was reading the Sherlock Holmes stories as a boy that first turned me on to the power of writing and storytelling.' (Stephen Fry) --This text refers to an alternate kindle_edition edition.

Sir Arthur Conan Doyle (1859-1930) was born in Edinburgh where he qualified as a doctor, but it was his writing which brought him fame, with the creation of Sherlock Holmes, the first scientific detective. He was also a convert to spiritualism and a social reformer who used his investigative skills to prove the innocence of individuals. Peter Ackroyd is a writer of novels including, 'Milton in America' and 'Hawksmoor', and of biographies of Chatterton, Dickens, William Blake and Thomas More. --This text refers to an alternate kindle_edition edition.
Read more

4.4 out of 5 stars
4.4 out of 5
1,906 global ratings
How are ratings calculated?
To calculate the overall star rating and percentage breakdown by star, we don’t use a simple average. Instead, our system considers things like how recent a review is and if the reviewer bought the item on Amazon. It also analyses reviews to verify trustworthiness.

adamwoodsaus
3.0 out of 5 stars Not at all what I expected
Reviewed in Australia on 29 December 2019
Verified Purchase
An interesting story but after finishing this, my second Conan Doyle novel, I am once again left slightly disappointed with the part Sherlock Holmes plays.

His powers of deduction are legend but Im not sure why. In the first two stories his deduction skills take a backseat to his impressive general knowledge. And I find that much less exciting and satisfying.

It is hard for me to avoid comparing two of the world’s most famous mystery writers: Sir Arthur Conan Doyle and Dame Agatha Christie. And for me the master is obvious. Doyle’s tales are entertaining and rich is historic context, but Christie’s novels create an excitement in the reader that Holmes cannot touch. Christie allows the reader to gather clues and make educated guesses. It is so satisfying to deduce the murderer in Poirot novels - and it’s frankly equally fulfilling to be fooled by Christie’s genius. With Holmes, that’s not on the cards and I find the stories less engaging because of that.

I probably wouldn’t bother with a third Holmes, if it weren’t for the fact that the next is The Hound of the Baskervilles, which I am led to believe is one of the best.

i.b-k
4.0 out of 5 stars Racism was rife!
Reviewed in Australia on 11 June 2015
Verified Purchase
An interesting story, but even more interesting as a study in casual racism.
Read more
Helpful
Report abuse

Mary R. Backeberg
5.0 out of 5 stars Five Stars
Reviewed in Australia on 20 December 2015
Verified Purchase
Great books, and I thoroughly enjoyed all of them.
Read more
Helpful
Report abuse
See all reviews

Kindle Customer
3.0 out of 5 stars Entertaining
Reviewed in the United Kingdom on 11 August 2018
Verified Purchase
Sherlock Holmes can be a tough nut to crack - you have to concentrate on the language, there are times where there are a lot of words for the sake of words, and the narrative doesn’t feel like it’s moving. But there are also times when you can build a head of momentum, and as you read, you get swept away with the rhythm of the writing.

This is my second Sherlock book now, and my current assessment would be that it can sometimes be hard to be motivated to read them, but once you get going, they are hard to put down.

A fun story, and will definitely continue with the Sherlock cannon!
Read more
6 people found this helpful
Report abuse

Carolyn Devine
1.0 out of 5 stars Who wrote this?
Reviewed in the United Kingdom on 11 January 2020
Verified Purchase
This edition reads as if it has been translated from a foreign n language by somebody with poor English. Americanised words like 'hassle', ,'buddy', 'guy' abound and it frequently makes no sense. A pity I can't complain to the publisher because it is unreadable and was a waste of money! I was quite amazed to read the other reviews as this Kindle edition makes very little sense!
Read more
4 people found this helpful
Report abuse

The story was actually shorter than I had expected but it allowed for the action to move swiftly, for Sherlock to display his detecting skills and show off a little, and let us get to know Watson and the beginning of his relationship with Mary Marsten.

For my first foray into Arthur Conan Doyle's writing, The Sign of Four was a great read. Full of mystery and intrigue, stolen gold and mysterious thieves who can vanish without a trace.

MsDocker
4.0 out of 5 stars Amusing
Reviewed in the United Kingdom on 27 June 2017
Verified Purchase
My first Sherlock Holmes story! This was on my list of required reading for university and found it to be a humorous, easy read. It was very amusing to discover the 'real' Sherlock Holmes is coke addict! This short read definitely left me wanting to read more of the stories.
Read more
8 people found this helpful
Report abuse

Officer Dibble
3.0 out of 5 stars Drugs and alcohol
Reviewed in the United Kingdom on 16 March 2018
Verified Purchase
Holmes is an extraordinary character even for 21st Century readers, quite what the Victorians made of him would be worthy of considerable study. Watson is more a chap of the first water and narrator of this gallop through foggy streets, pools of lamplight and 'bediamonded women'.

The real star is Toby the Hound sniffing his way across the entire Greater London area. Enjoyable read let down by the final, lugubrious, exposition chapter.
Read more
Report abuse
See all reviews
Back to top
Get to Know Us
Make Money with Us
Let Us Help You
And don't forget:
© 1996-2021, Amazon.com, Inc. or its affiliates