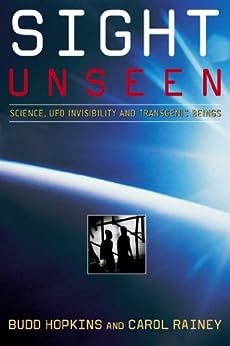 Whitley Strieber Sight Unseen is truly extraordinary, by far the most powerful and convincing book about the abduction phenomenon ever written. --This text refers to an alternate kindle_edition edition.

Carol Rainey is a writer and filmmaker who has produced and directed many PBS and independent documentaries on medical and scientific subjects.

Budd Hopkins is the New York Times bestselling author of three seminal books of the UFO abduction phenomenon: Witnessed, Intruders, and Missing Time. He has appeared on hundreds of national television and radio programs, and was the spokesperson for the SCI FI channel¹s miniseries Taken, produced by Steven Spielberg. He is also head of IF, the Intruders Foundation, a nonprofit research and support organization. --This text refers to an alternate kindle_edition edition.

PB
3.0 out of 5 stars An interesting read, but not up to the author's usual standard.
Reviewed in the United Kingdom on 10 March 2016
Verified Purchase
I'm generally a fan of Budd Hopkins and I thoroughly recommend reading "Witnessed" , as he's is a down to earth writer and he is usually pretty responsible when it comes to what he reports and how he handles cases. I also like the fact that he actually investigates cases himself, rather than just writing about cases that "he's heard about". He usually has a good writer and has an entertaining and easy to read style that gets his arguments across very well.

However, this book seems to clutch at a lot of straws in order to make a case for various forms of "invisibility" out of largely anecdotal evidence. The cases don't even seem to agree with each other as to the method or the mechanisms being used, or their effects. If it is to be believed, then there may be a dozen different alien races all with totally different invisibility technologies, all using it in totally different ways. There is no real pattern, and no real agreement between cases.

In one instance the author concludes that somebody who reported previous abduction experiences may be invisible because a total stranger doesn't make eye contact with them in a rest room, and a person with whom they are not well acquainted doesn't notice them in a crowd.

This is an interesting read if you are interested in Ufology or the Abduction phenomena, but it's not Hopkin's best Book. It's not Witnessed by a long stretch
Read more
One person found this helpful
Report abuse

Love to read
5.0 out of 5 stars Insight to sight unseen:
Reviewed in the United Kingdom on 17 February 2011
Verified Purchase
The book is well written and captivating, it covers a wide range of topics, ideas and theories. It has a lot of scope for future investigative avenues for those who are interested to follow them. By the end of the book it is clear that Budd is not really convinced that the aliens are what we would call interested in our wellbeing, I would agree on this point, to a point! As his research is mainly focused around the "Greys" and the offshoots of these visitors, I would have to say that I feel he is correct.

However, there is also other evidence to suggest that we are being visited by a lot more than just these grey's. My personal research concurs with Budd, but I do feel there is more to it than just the "Grey" question? I believe that there are those who are here to take, some to observe and others to help. In fact I suspect there is hostility between some of these alien races, to the point of violence, which would explain why we get crashed craft (one explanation anyway). So what you have here is part of the picture, but this part has been well covered and very well documented and it is a great piece of work! I would thoroughly recommend this book to anyone who is interested in the topic. So I must give it a 5 star, excellent book!
Read more
6 people found this helpful
Report abuse

Mr H
5.0 out of 5 stars Enjoyable and well balanced
Reviewed in the United Kingdom on 27 November 2012
Verified Purchase
This is the first book of this genre that I have taken the time and effort to read. In the past I have always brushed aside the theory of UFO and ET life, however after reading the descriptive and the reviews on this title I decided to take the plunge and give it a go.
A 'Sight Unseen' has been an eye opener to say the least and offers the reader a balanced perspective. In comparing the modern day science and technology of our world (how fast it is moving on, etc.) against possible / plausible technologies that may be being used by others not of this world, the authors explore reasoning and present an extraordinary set of cases for the reader to examine and draw their own conclusions. By comparing decades of frequent and unexplainable events from witnesses and other available evidence, I felt the research levels were well balanced, thought through and riveting.
I am not so fast to join the de-bunkers now..!
A recommended read on kindle.
Read more
Report abuse

V. Pyle
5.0 out of 5 stars The Best
Reviewed in the United Kingdom on 22 February 2008
Verified Purchase
This book, as do his others, give professional analysis of the facts.There is no sloppiness, avoidance of hard truths or flights of ideas either. I have been fortunate enough to meet Mr. Hopkins when he was in the UK. I was even more impressed by his gentle humility and clarity of thought, also his genuineness and firm insistance on using science and reason above exagerated claims or beliefs about what is really going on. Having said that, this must be the most important book and documented case yet in UFO phenomenon, and a must read for everyone,since it makes us question everything we were ever taught to believe in if you read this book and then think about it. My only complaint is that there are too few books from Mr. Hopkins.
Read more
11 people found this helpful
Report abuse

M. L. Shannon
5.0 out of 5 stars alien visitations
Reviewed in the United Kingdom on 2 November 2011
Verified Purchase
This was the fourth book by Budd concerning the alien abduction phenomenon and the first he wrote with his then partner Carol, It is interesting to note that after splitting with the late Budd she then went on a campaign against him refuting his claims. I find all of Budd Hopkins works works to be well researched and executed and his style of writing is of a such a high standard he reaches out to people from all walks of life and this book is no different. He covers some of the more famous stories covered in his previous books and some new nuggets all in all a good companion to other books in this field...Simply put quite brilliant.
Read more
Report abuse
See all reviews
Back to top
Get to Know Us
Make Money with Us
Let Us Help You
And don't forget:
© 1996-2021, Amazon.com, Inc. or its affiliates