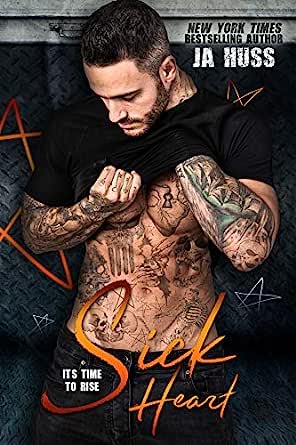 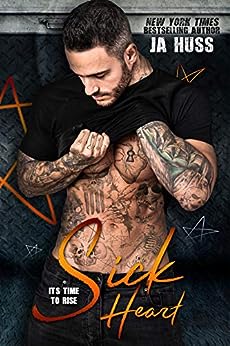 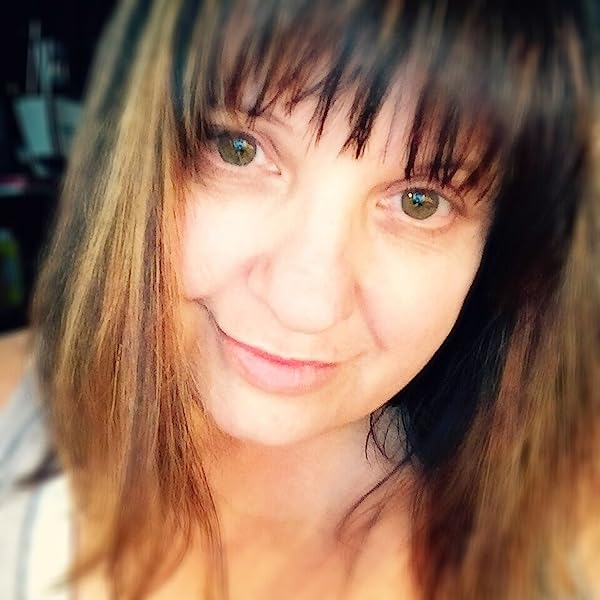 This is a new type of genre by J. A Huss and I hope this isn’t a one off. Sick Heart is a novel involving underground MMA fighting where only one man leaves alive. It’s kill or be killed. Cort Van Breda, known as Sick Heart, is the only man to have won thirty five death MMA matches. This is his last death match for the Ring of Fire Championship. He wasn’t meant to win.

For the winner there are a slew of rewards, one of which is a woman. Anya is the sacrificial reward between her patriarchal family and that of the Sick Heart camp. She wasn’t meant to live.

Although Cort has won numerous female slaves, but his father kept them all., along with the majority of his prizes. Cort wants to keep Anya, as she represents his last win before retiring. However, there is something special about Anya. At eighteen, she is past her desirable age as a house slave, Corts father wants her, her father wants her, and none want Cort to have her.

Court and Anya have something in common. They never talk. It’s the one part of their life they can control. Nothing about their lives have been normal, so their life together will never be a cookie cutter time-honoured relationship.

This book and its narrative is wonderfully written. I would go so far in saying that Sick Heart is Huss’s best work to date. It’s so engaging that it’s hard to put down. Huss never shys away from controversial topics, and this is about surviving against all odds.

I received a free copy from the author for an honest review.
Read more
2 people found this helpful
Helpful
Report abuse

Denise B
TOP 100 REVIEWER
5.0 out of 5 stars Exceptional
Reviewed in Australia on 11 April 2021
This is probably the hardest review I’ve ever written. Why? Because words like “awesome” “great read” “best story I’ve read in a long time” just don’t do it justice. In her EOBS JA Huss says this book is not dark, it is about survival in a dark situation (this was my take on her words) and it’s so true. For Cort and Anya they were bred and hunted for a sex trafficking operation by two sadistic MOFOs. Their earliest childhood memories are of pain and desolation and the most depraved things ever done to human beings. And now as adults they are still slaves but they are alive. They have absolutely no control over who or what they are. Cort is a fighter whose only purpose is to fight to the death and earn his owner large sums of money. He is now 27 and is fighting his last fight for his freedom. Anya is part of the his prize pool but she is also a complication he didn’t plan on. That’s all I’m going to say about this story except do yourself a favour and read it. In terms of this author I am blown away but the quality of writing and the story. I have read so much crap on Kindle that I get frustrated at all the shite writing. Then you come across something of this caliber and it makes you realise why you like reading. So JA Huss, thank you for this amazing story!
Read more
Helpful
Report abuse

Tiffany Ross
5.0 out of 5 stars Woah ⭐️ ALL THE STARS!
Reviewed in Australia on 9 April 2021
I have absolutely no words for this, my review won’t give this book any justice!
It’s seriously just one of those books, you need to jump in the deep end and read it.

At first I was so unsure how this could be a romance, but this author did not disappoint.

It is an extremely DARK book, but if you stick to reading it - you will enjoy the HEA♥️

Definitely 5 ⭐️ if I could give more, I certainly would.
Read more
Helpful
Report abuse

Maria
5.0 out of 5 stars ⭐️⭐️⭐️⭐️⭐️
Reviewed in Australia on 5 April 2021
J.A Huss has done it again, this a beautifully written story with many great characters.
It involves a topic that has come to light over the last to year for the first time for many people, but sadly it’s an issue that has been taking place for centuries.
Cort and Anya are true survivors of this brutal world, sometimes you gotta do what you gotta do to survive
Read more
Helpful
Report abuse

KatyJack
5.0 out of 5 stars Brutally Beautiful
Reviewed in Australia on 31 March 2021
I wondered where this book was going at first as as love story it didn't seem to follow the 'normal' way of love stories. In saying that it was obvious the connection between Cord and Anya from the beginning and lead me on a slow journey which I enjoyed immensely. I loved that parts challenged me to believe they were going to make it or not. Love comes in many forms and the underlying friendship of all parties cannot be dismissed as being an important factor which leads to these people to find their HEA. I think this book is one you could read a few times and find yourself pondering the what if! JA Huss never fails to deliver.
Read more
Helpful
Report abuse

Annette Gerritsen
5.0 out of 5 stars Sick Heart
Reviewed in Australia on 8 April 2021
Wow I really don’t know what to say but Brilliant book once again. We have a very sick world out there that does anything for money and pleasure. It’s a inside story to a fighting ring with sick people who breed kids for fighting . A story of survival and deep down love and also revenge. Thankyou for a great read.
Read more
Helpful
Report abuse

Janelle Pilgrim
5.0 out of 5 stars An awesome read.
Reviewed in Australia on 1 April 2021
What to say about Sick Heart? It was one of the best books I have read from Julie. Apparently it is her longest book, but it ended too soon! Definitely give this book a read. You won’t be disappointed 👍👍
Read more
Helpful
Report abuse

Me - Tracy Vanderschoot
5.0 out of 5 stars HeartStopping
Reviewed in Australia on 6 April 2021
This book is so heart stopping so heartbreaking so heartwarming
I cried and cried and then a huge sigh it a book worth reading
It has become one of my favourites
Read more
Helpful
Report abuse
See all reviews
Back to top
Get to Know Us
Make Money with Us
Let Us Help You
And don't forget:
© 1996-2021, Amazon.com, Inc. or its affiliates