Showgirls, Teen Wolves and Astro Zombies and over 1.5 million other books are available for Amazon Kindle . Learn more
Share <Embed> 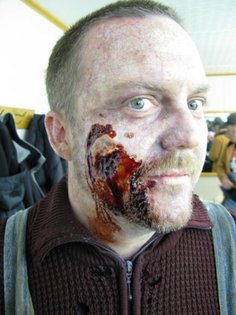 Page 1 of 1 Start overPage 1 of 1
Previous page
Next page
Start reading Showgirls, Teen Wolves and Astro Zombies on your Kindle in under a minute.

"Like many of the bad movies it celebrates, this book is addictive, mesmerizing and endlessly amusing."--Harry Medved, co-author of The Golden Turkey Awards and The Fifty Worst Films of All Time

"Michael Adams is the Peter Biskind of really crappy movies. I thank him for watching these films so I didn't have to claw my eyes out myself."--A.J. Jacobs, New York Times bestselling author of The Know-It-All and The Year of Living Biblically

"Michael Adams' book is great fun! No one intends to make a truly bad movie, but when they do, Michael Adams will be there to watch it...and make it entertaining."--John Landis, director of Trading Places and The Blues Brothers

"Reading Michael Adams' entertaining and disturbingly comprehensive book is like being dragged through the fun parts of Hell in a flame-proof suit. Having had both hands in the cesspools of cinema for over twenty years, I can say with confidence that this book is the best of its kind: a joyously critical, deeply personal journey through a medium we love to hate almost as much as we love to love."--Kevin Murphy, co-star/writer of Mystery Science Theater 3000 and author of A Year At the Movies

One reviewer's relentless search for the most appalling abomination ever to disgrace the screen--at the rate of one movie a day . . . for a year!

For every cinematic classic the studios have released, there have been dozens of cheesy monstrosities, overpriced flops, and schlocky epics. Rampaging robots, bouncing bimbos, moronic martial artists, vapid vampires, troubled teens, barbaric bikers, and idiotic infants--all of these, and more, have been foisted on us in the name of entertainment. And entertaining they are--for all the wrong reasons!

Featuring a cast of thousands, including A-listers like Brad Pitt and Sandra Bullock in their Z-grade origins, and firsthand interviews with bad-movie aficionados, from Leonard Maltin and David Sedaris to John Waters and Eli Roth, this odyssey charts one intrepid critic's attempt to maintain a normal family life and two day jobs as he watches hundreds of dreadful tapes and DVDs in every conceivable genre. Even movie buffs will be surprised by what they can learn as they laugh out loud at the worst of the worst.

With a foreword by revered Night of the Living Dead director George A. Romero, Showgirls, Teen Wolves, and Astro Zombies is an unforgettable journey deep into film's forbidden vault of irredeemable crud. Be afraid. Be very afraid.

Michael Adams is the reviews editor of the Australian edition of Empire magazine and a contributor to Men's Style, Rolling Stone, and RottenTomatoes.com. He also writes the Bad Movies We Love column for Movieline.com and the Schlock & Awe column for TheWrap.com. He lives in Sydney. Those who saw his cameo as Stoned Hippy in the Z-grade classic Bloodlust won't be looking forward to his zombie acting in Survival of the Dead.

Michael Johnson
4.0 out of 5 stars Love That Cheese
Reviewed in the United States on 25 April 2016
Verified Purchase
Ordinarily I ignore requests for reviews, because the whole idea of amateur reviews is silly. BUT, I'm a huge fan of crappy monster movies and movies involving breasts--sometimes all in the same movie. I salute Michael Adams for doing the research, helping us all to avoid the ones that are so bad, they're just bad. I'm giving his book only four stars because, with the huge data dump, the discussion of individual films is often too brief.
Read more
Report abuse

Lary Crews
5.0 out of 5 stars Fascinating book by an Aussie
Reviewed in the United States on 22 May 2013
Verified Purchase
I enjoyed a totally excellent buying experience, such that I felt it incumbent on me to bring to the attention of other buyers how great this seller is. My book was better than advertised, in terms of quality. It was carefully packed for its ride to my house. I was baffled by how quickly it shipped and delighted once it got here. A recommended seller, for sure.
Read more
Report abuse

Clifton Toliver
5.0 out of 5 stars Five Stars
Reviewed in the United States on 6 May 2016
Verified Purchase
It was a fun read. I have actually seen many of he movies he talked about in the book.
Read more
Report abuse
See all reviews
Get FREE delivery with Amazon Prime
Prime members enjoy FREE Delivery and exclusive access to movies, TV shows, music, Kindle e-books, Twitch Prime, and more.
> Get Started
Back to top
Get to Know Us
Make Money with Us
Let Us Help You
And don't forget:
© 1996-2020, Amazon.com, Inc. or its affiliates