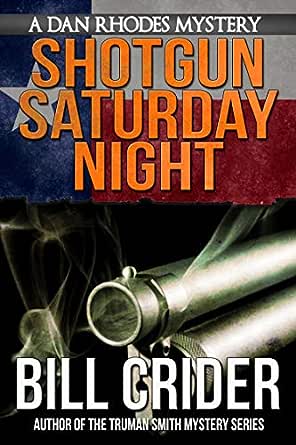 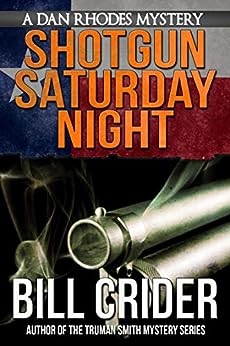 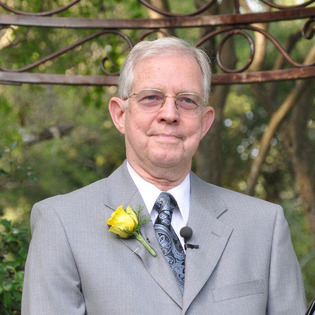 Mel Odom
5.0 out of 5 stars Pieces of a Puzzle
Reviewed in the United States on 25 June 2013
Verified Purchase
Shotgun Saturday Night is Sheriff Dan Rhodes's second outing, and the novel is a pretty twisty, turny narrative of murder and violence, as well as the sideways humor that author Bill Crider always leavens into the story. I'd read the book before and enjoyed it, but my memory being what it is, I couldn't remember who had done what to who, so traipsing along for Rhodes's investigation was just as much fun this time as it was the first time.

It opens up with an amputated arm being delivered to Rhodes. Pretty soon, more pieces of the puzzle turn up, seriously - pieces! - and the country sheriff is up to his ears in body parts, bikers, and murder.

Blacklin County is one of those fictional places where the citizens just grow on readers. As the series progresses, Crider adds layers and layers of history onto each individual, though still maintaining an easy identification. I enjoy getting to see those folks against just as much as I enjoy the eateries Crider describes in the narrative. Lester's BBQ reminds me a lot of the old Bob's BBQ I went to back in Ada, Oklahoma. I enjoy the local Swadley's BBQ in OKC, but the people in Bill's book and the downhome atmosphere just don't show up in these big city places.

In addition to the murders and the colorful characters, Crider throws in a lot of humor and everyday problems for Rhodes to deal with. The woman who periodically calls in stating she's gone blind is a hoot, and things like that would really happen in the small town I grew up in. The author obviously knows his little town well, even though Blacklin County is fictional. Crider obviously bases the place on remembrances of his own.

There's a lot more going on in this novel than in the first one. Rhodes gets beaten up a few times, the FBI shows up, another funeral gets disrupted, and there are a few dozen movie and book references that I loved. True movie and book fans will be acquainted with them, but it doesn't matter if you're familiar with them or not. A quick trip to the internet will probably get you information in stuff you just might develop an interest in.

Ivy, Rhodes's new girlfriend, shows surprising moxie in this novel that blew me away when I read it, yet at the same time I totally believed it. She's become a nice part of the series by this second book, and I enjoy the shy way the romance between Rhodes and Ivy has developed.

These books are heartily recommended as great summer fare. They're engaging and yet not demanding. Perfect for those summer evenings when you happen to nod off while relaxing.
Read more
2 people found this helpful
Helpful
Sending feedback...
Thank you for your feedback.
Sorry, we failed to record your vote. Please try again
Report abuse

Lynn T.
4.0 out of 5 stars Enjoyable Read
Reviewed in the United States on 1 January 2014
Verified Purchase
Shotgun Saturday Night is the 2nd book in the Dan Rhodes mystery series. Dan Rhodes is a sheriff who solves cases by observing and talking to people. He likes iced cold Dr. Pepper in bottles and hamburgers wrapped In paper. The location of the book is Blackin County in rural Texas.

The mystery starts out with a worker cleaning up brush finding boxes of human arms and legs that he brings to Dan Rhodes. Dan Rhodes then has to find out if a crime has been committed or if someone is disposing amputated limbs without following the proper procedures. While working on this problem, several murders occur.

Dan is a widower and has recently met a lady who interests him. He is being quite cautious in proceeding with the relationship. He has eaten a lot of bologna sandwiches since the death of his wife. He watches old tv movies while eating his meals. He is very likeable.

I am really enjoying the series. This book was a fast read for me and held my interest. Besides being an entertaining read, I think the personality of Dan Rhodes is a factor too. The series is very visual for me as I can picture Dan out talking to people. The secondary characters of Hack, Lawton and Ruth add humor to the story line. Enjoyed the addition of Speedo to the cast of characters. I look forward to the next book Cursed to Death.
Read more
2 people found this helpful
Helpful
Sending feedback...
Thank you for your feedback.
Sorry, we failed to record your vote. Please try again
Report abuse

Ellen W.
5.0 out of 5 stars Sly humor and solid characters
Reviewed in the United States on 29 May 2018
Verified Purchase
I can’t get enough of the Dan Rhodes Mysteries! Bill Crider has created a place in Clearview that is real and small town but never dull. You can almost feel the heat and see the dust.
Mr Crider also has brought to life characters that feel like they could be your neighbors. He has a great way with detail and an excellent, sly sense of humor.
I began reading some of the later books through my local library and was thrilled to find the books that began the series on Amazon. I will make sure I read them all. Do yourself a favor and head to Clearview, TX by way of Bill Crider’s excellent writing.
Read more
Helpful
Sending feedback...
Thank you for your feedback.
Sorry, we failed to record your vote. Please try again
Report abuse

cathy
5.0 out of 5 stars the dan rhodes books are fantastic
Reviewed in the United States on 7 November 2013
Verified Purchase
bill crider came up with a great character. sheriff dan Rhodes. I have been reading in order and just finished #6. tried to get 7 and 8 on kindle but unable.

I will say that these books are absolutely wonderful. there is romance, there is murder, there is comedy with two old cronies that run his jail and I wholeheartedly recommend these books to all.

I do strongly suggest that one reads them in order. I had a problem determing the correct order but an email to mr. crider and bingo, he sent me his numerical list. wonderful writer and man.

keep up the good work bill and keep'em coming. I will read all 21 when I can get them.

Gary L. Rezeau
5.0 out of 5 stars Dan Rhodes Mystery novels are terrific - ALL 4 of them!!
Reviewed in the United States on 4 June 2018
Verified Purchase
I have read all four of Bill Crider's Dan Rhodes Mystery novels. As an avid reader, if I really like the first one in the series, I end up reading them all in order. I can see why Bill Crider has received awards for his work.
Read more
Helpful
Sending feedback...
Thank you for your feedback.
Sorry, we failed to record your vote. Please try again
Report abuse
Load more international reviews

M. C. Carter
4.0 out of 5 stars Dan is the Man
Reviewed in the United States on 23 January 2014
Verified Purchase
I have to admit I have a secret literary crush on Sheriff Dan. He is strong, possessed of a sense of self and more importantly a strong sense of humor. He is kind and patient with a lot of irritants. He never loses sight of his case but can indulge the elderly ladies of his county who need raccoons chased out of attics. I highly recommend this series and anxiously wait each new offering.
Read more
One person found this helpful
Helpful
Sending feedback...
Thank you for your feedback.
Sorry, we failed to record your vote. Please try again
Report abuse

Kindle Customer: Gary Austin
5.0 out of 5 stars Good read.
Reviewed in the United States on 15 May 2020
Verified Purchase
Interesting book and it keeps you interested. Good well developed characters. His comments on food makes me hungry. I'm just a Bill Crider fan. Used to talk to him via email, before he passed. He was a great guy.
Read more
Helpful
Sending feedback...
Thank you for your feedback.
Sorry, we failed to record your vote. Please try again
Report abuse

Randy Rawls
5.0 out of 5 stars Another Five Stars for Crider
Reviewed in the United States on 11 January 2018
Verified Purchase
Bill Crider always entertains, and SHOTGUN SATURDAY NIGHT is no exception. An enjoyable read by an author I enjoy.
Read more
Helpful
Sending feedback...
Thank you for your feedback.
Sorry, we failed to record your vote. Please try again
Report abuse

Luv2read
5.0 out of 5 stars Enjoyable easy read
Reviewed in the United States on 11 January 2014
Verified Purchase
I always enjoy the Dan Rhodes series. The characters are realistic, seemingly drawn from small town Texas. It's like reading about the folks at home, other than I've never heard of any single small Texas town having quite this many murders without calling in the Rangers.
Read more
Helpful
Sending feedback...
Thank you for your feedback.
Sorry, we failed to record your vote. Please try again
Report abuse

Annette
4.0 out of 5 stars Sheriff Rhodes is always entertaining.
Reviewed in the United States on 20 August 2018
Verified Purchase
Enjoyed the book. Had read several later books, so ordered the first two on Kindle.
Read more
Helpful
Sending feedback...
Thank you for your feedback.
Sorry, we failed to record your vote. Please try again
Report abuse