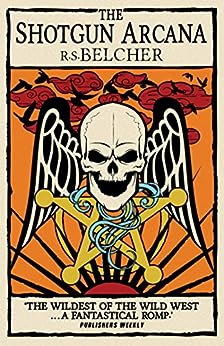 "Really engrossing.... If you love complex, fantastical worlds, this is very intriguing!" --Felicia Day, writer, producer, and star of The Guild on The Six-Gun Tarot

"A jaw-dropping first novel that explodes across genre lines. Wild, gritty, insanely inventive and a hell of a lot of fun!" --Jonathan Maberry, New York Times bestselling author on The Six-Gun Tarot

"In The Six-Gun Tarot, author R.S. Belcher has crafted the perfect novel. Blending themes of fantasy, western, romance, and action, there is nothing missing from this brilliant story." --Portland Book Review on The Six-Gun Tarot

"The Six-Gun Tarot, a strong first novel by R.S. Belcher, features a genre mix that's very much in vogue these days: the dark and twisted western . . . Belcher takes to it like a natural. He jumps right in!" --Locus on The Six-Gun Tarot

R.S. Belcher is the acclaimed author of The Six-Gun Tarot, which made several year's best fantasy lists. He lives in Salem, Virginia. --This text refers to an alternate kindle_edition edition.

"One fast-paced sci-fi/steampunk Western peppered with double-crosses, surprise revelations and a splendid showdown." - <i>The Washington Post</i> --This text refers to the paperback edition.

R.S. Belcher is the acclaimed author of The Six-Gun Tarot, which made several year's best fantasy lists. He lives in Salem, Virginia. --This text refers to the paperback edition.

R.S. Belcher is the acclaimed author of <i><b>The Six-Gun Tarot</b></i>, which made several year's best fantasy lists. He lives in Salem, Virginia. --This text refers to the paperback edition.

"One fast-paced sci-fi/steampunk Western peppered with double-crosses, surprise revelations and a splendid showdown." - The Washington Post --This text refers to the paperback edition.
Read more

4.6 out of 5 stars
4.6 out of 5
102 global ratings
How are ratings calculated?
To calculate the overall star rating and percentage breakdown by star, we don’t use a simple average. Instead, our system considers things like how recent a review is and if the reviewer bought the item on Amazon. It also analyses reviews to verify trustworthiness.

CC Man
4.0 out of 5 stars horrible nameless nasties from The Pit - and all in ...
Reviewed in the United Kingdom on 2 December 2014
Verified Purchase
Fallen angels, pirate queens, mad scientists, shapeshifters, ninja housewives, horrible nameless nasties from The Pit - and all in the wild wild west. What's not to like? This is the second book in the series by R S Belcher and it might be advisable to read the opening novel before this one. I hadn't and Belcher obviously thought anyone coming fresh to the series would need explanations of what went before and they are scattered throughout the text, sometimes getting in the way of the action. Belcher himself has apparently had a varied career (journalist, DJ, criminologist etc) and was even a member of Virginia General Assembly's Occult Crime taskforce. That sounds ominously like some Republican right wing freak show but seems to have been a relatively sane legal review. Presumably the author picked up a few tips along the way and if so, he's certainly applied them here. The bad guys are nasty and some of them are even human. Sheriff Jon Highfather and his deputies are all that stands between the town of Golgotha (biblical references are everywhere) and the approaching occult apocalypse. The tarot, free will (or the lack thereof) and why a supposedly benevolent God allows suffering are a constant backdrop as the plot unfolds. But the author doesn't forget his primary purpose of entertaining and I enjoyed this. It's a delirious ride but one well worth taking. Must get the first book now...
Read more
Report abuse

Seraph Ar'el
4.0 out of 5 stars Weird Weird West
Reviewed in the United Kingdom on 10 January 2018
Verified Purchase
A great follow on from Six Gun Tarot. I thoroughly enjoyed this book. I just hope there are more to come that involve Jim, Mutt and Highfather, as their stories seem to have been left wide open.
Read more
Report abuse

peter rosic
5.0 out of 5 stars Brilliant book
Reviewed in the United Kingdom on 6 October 2016
Verified Purchase
Loved this book and I hope this author will write more .it was a wild romp through the wild west with some familiar villains and likeable good guys .would highly recommend it
Read more
Report abuse

Unfortunately The Shotgun Arcana does not quite achieve the five stars of its series predecessor The Six-Gun Tarot. Still an excellent read at four stars.

The ending was a little glib and easy - still tense and exciting but some parts just came together too easily. The pirates riding repurposed civil war surveillance balloons to turn the battle to the "good" side just sort of came out of nowhere.

Even given the few flaws this wild ride of conflict between abandoned angels, arcane scientists, a sheriff who can't die (yet), a part coyote deputy, a warrior of the Daughters of Lilith and an evil skull spreading its teath around is a uniquely fun read.
Read more
Report abuse