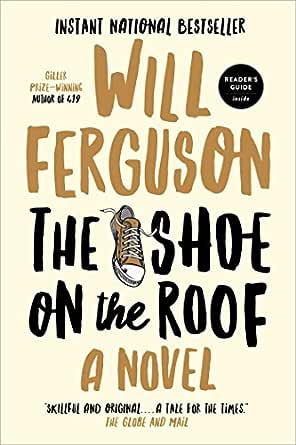 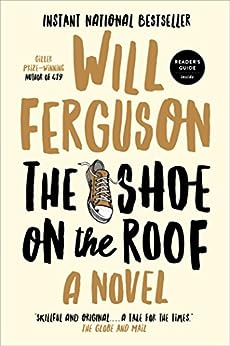 The Shoe on the Roof Kindle Edition

"The Shoe on the Roof is often laugh-out-loud funny despite its serious and tragic underpinnings. But it's also thought-provoking, occasionally violent and will likely stay with readers long after the last page is read." -- "Calgary Herald"

"Another gem from this Giller Prize-winning author."-- "Canadian Living"

"Ferguson is a keen observer of landscapes and cityscapes, and has a brilliant ear for dialogue and accent.... you will never see those creative 419 emails in your inbox in quite the same way."-- "The Gazette (Montreal)"

Praise for The Shoe on the Roof "Ferguson is a skillful and original writer, and over all, the novel is full of life. . . . The Shoe on the Roof's lasting strength is in such sly jabs at the "alternative facts" and deep divisions we're now reckoning with, making it a tale for the times." -- "The Globe and Mail"

PRAISE FOR 419 "A deeply ironic, thoroughly engaged politico-philosophical thriller from a comic writer best known for winning a trio of Leacock Awards.... You won't sleep until you finish, and then rest won't come easily. Riveting. Provocative."-- "The Globe and Mail" --This text refers to an alternate kindle_edition edition.

Will Ferguson is the author of four novels, including 419, which won the Scotiabank Giller Prize. A three-time winner of the Stephen Leacock Medal for Humour, he has been nominated for both a Commonwealth Prize and an International IMPAC Dublin Literary Award. His most recent novel, The Shoe on the Roof, was an instant national bestseller. Will Ferguson lives in Calgary. Visit him at WillFerguson.ca. --This text refers to an alternate kindle_edition edition.

Carolyn
3.0 out of 5 stars ... books by Will Ferguson and count them amongst my favourite books, giving them both my rare 5 star ...
Reviewed in Canada on 27 October 2017
Verified Purchase
I had read two previous books by Will Ferguson and count them amongst my favourite books, giving them both my rare 5 star ratings. These two books: 419 was a work of fiction involving Nigerian internet scams and environmental degradation caused by western companies in Nigeria. It worked as a thriller, with good sense of place and interesting characters. Road Trip Rwanda is a non-fiction travelogue describing travel in Rwanda twenty years after the genocide. Both books were completely different, and I found them great reads.
I looked forward to this book, again it was very different from the books I had already read, and for me not as enjoyable. The author has several awards for works of humour, and some reviews mentioned enjoying the humour in this book. I found very little that made me laugh or smile.
The main character, Thomas, is doing graduate work in the study of the brain. Some of his experiments are unethical and carried out with a friend in the lab secretly at night. He is misogynistic, and treats women badly. After being dropped by his current girlfriend, Amy, he attempts to win her back by curing her brother’s delusion of believing he is Jesus. Some of my problem with the story was my dislike for the character, Thomas.
Thomas is estranged from his father, a psychiatrist, who gained fame and wealth by keeping Thomas mostly isolated and under constant observation throughout his childhood. Thomas became known as the ‘Boy in the Box’ after the book written by his father based on this experiment.
The book details the study of the brain, locating various emotions and thought processes in certain locations. Some of Thomas’s experiments involve trying to locate religion and love within the brain’s anatomy. When he decides to cure Amy’s brother he also finds two other men who claim to be Jesus. He moves all three into his apartment in the belief that their conversations will shock them out of their delusions once they realize that not all three can be the same person and reality will set in.
There is some discussion about methods used to cure mental illness. How mental and emotional disturbances are labeled and giving pharmaceuticals designed to help versus behaviour modification, as well as psychoanalysis. The 1950’s shock therapy and past immersing a patient in water until he almost drowns are also mentioned unfavourably. After some time under Thomas’s supervision the three patients are calmer, but still believe they are Jesus.
One day Thomas’s father shows up at the door, and uses his medical authority to move the patients into the home where Thomas grew up under constant observation. His father believes in behaviour modification while ignoring any cause of mental illness in their background. The three men are confined in separate locked rooms and monitored. Things go terribly wrong for Thomas and the men.
As a sideline, we have a murder mystery. Someone is killing homeless people. I thought this could be omitted, as well as Amy and his previous female conquests. I felt the conclusion left a few things unresolved.
Read more
2 people found this helpful
Report abuse

Book Lover
5.0 out of 5 stars I love Will Ferguson's writing
Reviewed in Canada on 20 November 2017
Verified Purchase
I love Will Ferguson's writing. His characters are so strong; you never have to look back to see who is who. His dialogue is on the mark no matter who is speaking and with the diversity of people in this book, each had his own voice And what to say about his humour - it is often hidden and yet I am laughing, snorting and guffawing when I least expect it! Three men - a priest, a magician and a homeless giant are living with you in your apartment. All of them think they are Jesus Christ and Thomas, a student at Harvard working on his doctoral thesis, thinks by having them together will force one or all to admit they are dillusional. What could possibly go wrong?
I learned a lot about psychiatry, mental illness, schizophrenia and life in a tent city. I REALLY enjoyed this latest book by Ferguson.
Read more
One person found this helpful
Report abuse

Amazon Customer
5.0 out of 5 stars Such a good book
Reviewed in Canada on 8 April 2019
Verified Purchase
It was so well written and unusual and creative and really hard to put down. We are all on a scale of psychological difficulties and this book really highlights the compassion we all need for ourselves and others. Really good book.
Read more
Report abuse

Monica Kee
4.0 out of 5 stars Psychiatry on trial
Reviewed in Canada on 6 August 2018
Verified Purchase
As a nurse with 30 years in the mental health field I found this a believable, entertaining and disturbing work. It reminded me of some of the experiments I've read about in Canadian psychiatric history.
Read more
Report abuse
See all reviews
Get FREE delivery with Amazon Prime
Prime members enjoy FREE Delivery and exclusive access to movies, TV shows, music, Kindle e-books, Twitch Prime, and more.
> Get Started
Back to top
Get to Know Us
Make Money with Us
Let Us Help You
And don't forget:
© 1996-2020, Amazon.com, Inc. or its affiliates