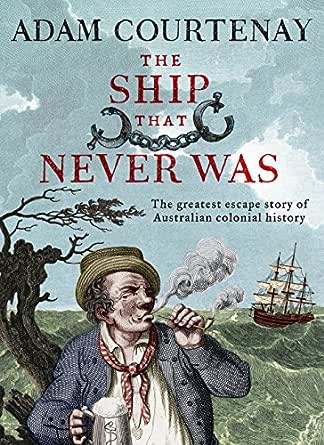 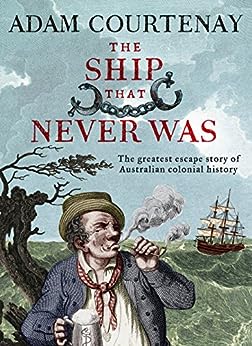 The Ship That Never Was: The Greatest Escape Story Of Australian Colonial History Kindle Edition

The greatest escape story of Australian colonial history by the son of Australia's best-loved storyteller.

In 1823, cockney sailor and chancer James Porter was convicted of stealing a stack of beaver furs and transported halfway around the world to Van Diemen's Land. After several escape attempts from the notorious penal colony, Porter, who told authorities he was a 'beer-machine maker', was sent to Macquarie Harbour, known in Van Diemen's Land as hell on earth.

Many had tried to escape Macquarie Harbour; few had succeeded. But when Governor George Arthur announced that the place would be closed and its prisoners moved to the new penal station of Port Arthur, Porter, along with a motley crew of other prisoners, pulled off an audacious escape. Wresting control of the ship they'd been building to transport them to their fresh hell, the escapees instead sailed all the way to Chile. What happened next is stranger than fiction, a fitting outcome for this true-life picaresque tale.

The Ship That Never Was is the entertaining and rollicking story of what is surely the greatest escape in Australian colonial history. James Porter, whose memoirs were the inspiration for Marcus Clarke's For the Term of his Natural Life, is an original Australian larrikin whose ingenuity, gift of the gab and refusal to buckle under authority make him an irresistible anti-hero who deserves a place in our history.

Gaye Saunders
5.0 out of 5 stars Great read
27 December 2018
Format: Kindle EditionVerified Purchase
Loved the historical account of James Porter’s life as a convict . Having been to Sarah Island I can relate to the story & picture the conditions they were in. Well written would definitely recommend this to anyone who loves Australian history.
Read more
One person found this helpful
Helpful
Comment Report abuse

Brian
5.0 out of 5 stars An interesting read
1 October 2019
Format: Kindle EditionVerified Purchase
Into the haardsips and life life of a convict coupled with the hisjpory of the "birth" of tasmania.
Reccomend it.

Jim
4.0 out of 5 stars The Ship that never was
15 August 2018
Format: Kindle EditionVerified Purchase
I found the book gave considerable amount of history information regarding the Convict Transportation to Tasmania
Read more
Helpful
Comment Report abuse

john eastman
5.0 out of 5 stars A true life story about the human spirit, that is exceptionally well told. Great read.
6 August 2018
Format: Kindle Edition
James Porter, who tried to tell his captors that he was a "beer machine maker" must have been born not only with thick skin, and a thirst for adventure; but the resilience of an ox. This tale of convict escape is quite incredible. The research is meticulous, and as each chapter begins you find yourself asking if it is possible for the story to become anymore far-fetched. It educates to the same degree that it entertains. A Courtenay special delivery beckons..
Read more
3 people found this helpful
Helpful
Comment Report abuse

helene scarf
5.0 out of 5 stars A must read!
28 July 2018
Format: Kindle Edition
Courtenay's skill in bringing to life the tribulations of a scallywag convict, Porter, is both vivid and entertaining. The racey way he describes our penal settlement at Port Arthur and Porter's subsequent escape is thrillingly authentic. History made a pleasure to read.
Read more
One person found this helpful
Helpful
Comment Report abuse

Veronique
5.0 out of 5 stars Compelling read
24 July 2018
Format: Kindle Edition
The Ship That Never Was is a captivating tale about convict escape. I derived a lot from reading this book, as it's a part of Aussie history that I knew little about.
Read more
One person found this helpful
Helpful
Comment Report abuse
See all 8 customer reviews
Write a customer review

Go to Amazon.com to see all 4 reviews 4.4 out of 5 stars
Get FREE delivery with Amazon Prime
Prime members enjoy FREE Delivery and exclusive access to movies, TV shows, music, Kindle e-books, Twitch Prime, and more.
> Get Started
Back to top
Get to Know Us
Make Money with Us
Let Us Help You
And don't forget:
© 1996-2020, Amazon.com, Inc. or its affiliates