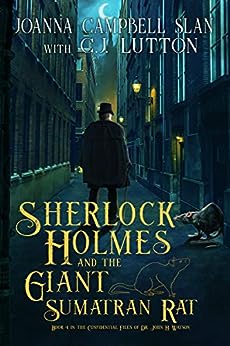 4.0 out of 5 stars
4 out of 5
49 global ratings
How are ratings calculated?
To calculate the overall star rating and percentage breakdown by star, we don’t use a simple average. Instead, our system considers things like how recent a review is and if the reviewer bought the item on Amazon. It also analyses reviews to verify trustworthiness.

Kindle Customer
5.0 out of 5 stars I had to read to the end to prove I could.
Reviewed in the United States on 8 July 2021
Verified Purchase
This a great and fantastical story, somehow made believable. At times Watson's character is too verbose, just chug through it. Not to give away the ending, but I will say I was very touched by the 4 main characters bravery.
Read more
Report abuse

Pastor Liz
5.0 out of 5 stars Wow
Reviewed in the United States on 11 May 2021
Verified Purchase
Exact tone of the Holmes books. Fascinating story keep me guessing right till the end. Tragic and moving yet somehow satisfying
Read more
Report abuse

Charles Curtis Floyd
5.0 out of 5 stars Good read
Reviewed in the United States on 17 December 2020
Verified Purchase
Sherlock writers always have good readings....
Read more
Report abuse
See all reviews
Back to top
Get to Know Us
Make Money with Us
Let Us Help You
And don't forget:
© 1996-2021, Amazon.com, Inc. or its affiliates