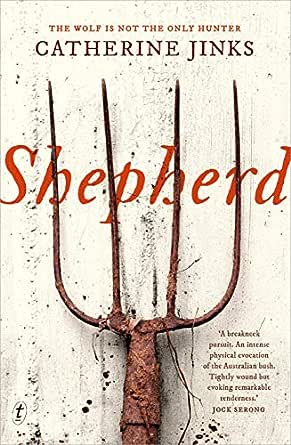 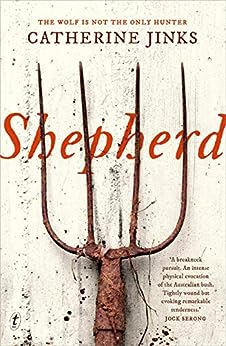 "[A] breathtaking pursuit novel full of brutality and tenderness."--Shelf Awareness

"A breakneck pursuit. An intense evocation of the Australian bush. Tightly wound but evoking remarkable tenderness."--Jock Serong, author of On the Java Ridge

"Fast-paced, emotional, frightening and full of detail, it's history made as entertaining and as gripping as a night at the movies."--Australian Women's Weekly on The Dark Mountain

"I've always thought there should be more outback horror and Catherine Jinks has come up with the goods."--The Age on The Road

Catherine Jinks' books for adults, young adults and children have been published in a dozen countries and have won numerous awards, including a Victorian Premier's Literary Award and the CBCA Book of the Year Award (four times). She lives in the Blue Mountains. --This text refers to the paperback edition.

Andrea T
TOP 500 REVIEWER
3.0 out of 5 stars Charged and compelling
Reviewed in Australia on 8 June 2020
In essence a chase novel, Shepherd is also a confidently pitched work about something just a little different. There’s not a lot written that is set in this time, being the settler years of Australia, so that alone is something of a literary hook and grab for a young reader to pick up this book. Featuring the voice of a young convict sent out to work in the remote New South Wales outback, Shepherd tells a fine tale of how inner grit and resourcefulness can be applied to any situation, however unfamiliar.

A poacher’s son, twelve year old Tom Clay is well used to tripping carefully about, watching closely for signs of trouble and always remaining unnoticed in the background. Surviving the hellish ride out from Britain in the belly of a convict’s transport trip, Tom still has many harsh challenges ahead. For virtue of having had some experience with animals, Tom is sent to an isolated settlement farm to look after a flock belonging to one Mr Barrett, a gentleman who holds no patience for shirkers.

Tom’s biggest asset is his ability to coax the best out of the farm’s sheepdogs, and Gypsy, a quick-witted and loyal herder, is Tom’s greatest ally. Living in a tiny box of a hut with the taciturn hutkeeper Joe Humble, Tom is very aware that being a man down when there is someone out there with a very large axe to grind is not an ideal situation. The last round of attacks that Tom and Joe had to endure was not from the local indigenous folk or from wild dogs – it was from one of their own. Carver, who used to work also for Mr Barrett, is still out there somewhere, ready to strike when Tom’s guard is down. Rowdy, a charming Irishman with few bush skills, soon joins Tom and Joe at the shepherd’s hut to replace the absent Carver. Things aren’t calm for long. Carver hasn’t given up on getting his revenge for being thwarted by a child.

The fact that the narrator is so young and having to take charge of such an awful situation is particularly poignant, with young Tom possessing extraordinary reserves of survivalist techniques and internal fortitude. Shepherd divides the action between the now and details of Tom’s past, the pullbacks written in after suitable cliff hangers. The bleak circumstances in which young Tom finds himself is not due to his own inexperience or bad decisions, and firms his will to overcome such injustices.

The language of Shepherd is for the most convincingly authentic, but there are notable uncertain clangers that arise. Not sure if the references to bears, wolves and badgers were meant to be distinctive descriptives to illustrate the unfamiliarity of the animals, so foreign to those Tom would have experienced from his childhood years in Suffolk, but these mentions do jar as you come across them.

Shepherd has a high death count which doesn’t seem remotely strange considering all that we know of the bloody history of Australian’s colonial years, and Tom’s little fictional slice of such a time is a vividly written and electrifying read. Tom’s insights and motivations may be that of a poor child that no one cares about, but they are so charged, important and compelling.

(Kudos to the cover artist as it is a book sleeve that has demanded attention on many a book shop browse).

Jennifer Cameron-Smith
TOP 10 REVIEWER
5.0 out of 5 stars ‘I see nothing around me that I can properly name.’
Reviewed in Australia on 25 January 2020
New South Wales, 1840. Thirteen-year-old Tom Clay, an orphan, was convicted of poaching in Suffolk. He is transported to New South Wales. He’s assigned to a farmer as a shepherd, one of three whose job it is to protect his master’s flock of sheep from wild dogs. The three of them live in a crude hut. Tom finds the sheep dogs better company than the men.

‘I’m as lost in this place as I would be in the middle of London. I don’t know what is dangerous and what isn’t.’

But this is no idyll. A man is murdered. He is replaced. The murderer, intent on eliminating witnesses, returns. The shepherds must fight for their lives. They flee into the bush and are pursued.

The story is told over a couple of days. The action is relentless. We are with Tom as he flees, trying to find safety, trying to survive. Can Tom prevail over the murderer?

The first time I read this, I had my heart in my mouth. The second time (for I needed to reread) I was better able to observe Ms Jinks’s storytelling skills.

If you enjoy fast-paced action set in 19th century Australia, I can recommend this novel.

Note: My thanks to NetGalley and Text Publishing Company for providing me with a free electronic copy of this book for review purposes.

Kjane
TOP 500 REVIEWER
5.0 out of 5 stars A gripping, violent book
Reviewed in Australia on 19 January 2020
Tom Clay is a boy who has lost everything he has ever loved. Having been transported to Australia as a convict for poaching (his only means of survival having been orphaned) he finds himself a shepherd to sheep on an Australia farm in a remote rural setting. Coming from poaching stock, Tom has to relearn everything he has been taught as he no longer recognises the plants, animals and other signals from nature.
Tom has the misfortune of finding himself in a battle of wits against violent and dangerous bushrangers. Can he use his poaching skills to match wits with these armed men?
At first I thought this would be a prolonged drudge through Australian convict history and I was not sure I would finish the book. However, after the first chapter the pace of the book sped up significantly and I found it very hard to put down. This was the 1840 equivalent of an action movie 'car-chase'. A very gruesome and sometimes graphically told story about a brave and very clever young man who managed to break my heart.
Thank you Text Publishing and Netgalley for the opportunity to read this very engaging piece of historical fiction.
Read more
Helpful
Comment Report abuse

This book is set in 1840 in colonial outback Australia. Tom Clay is a 13 year old convict from England who is working as a shepherd. His best friends are the sheep dogs, especially Gyp. A former work mate Dan Carver returns and is set on getting rid of all those who know about his murderous past. Dan Carver is an awful and sadistic man and soon Tom and work mate Rowdy and the dogs are on the run for their lives. The outback is harsh and dark, and they have to do whatever they can to survive.

Thanks to Test Publishing via Edelweiss for my copy of this book to read. All opinions are my own and in no way biased
Read more
Helpful
Comment Report abuse

zuzu burford
5.0 out of 5 stars Historical Fiction
Reviewed in Australia on 5 December 2019
An amazing story during early Australian colonisation with a hostile environment that brings out the good and nasty trying to adapt.
As the adventure for Tom becomes more graphic Catherine Jinks cleverly contrasts the isolation that first convicts experienced and English rule for the privileged and the no-win situation with either. Learning from a poacher family helps Tom survive by adapting to the surroundings and using his skills to great advantage managing to stay alive.
This is an exciting nail biting story that touches many ethical confronting moments still relevant today a first class Australian novel.
An independent review forText & NetGalley
Read more
Helpful
Comment Report abuse
See all reviews from Australia
Get FREE delivery with Amazon Prime
Prime members enjoy FREE Delivery and exclusive access to movies, TV shows, music, Kindle e-books, Twitch Prime, and more.
> Get Started
Back to top
Get to Know Us
Make Money with Us
Let Us Help You
And don't forget:
© 1996-2020, Amazon.com, Inc. or its affiliates