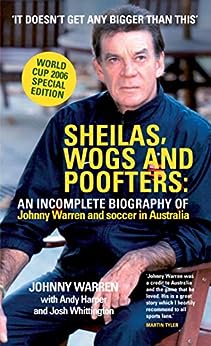 by Johnny Warren (Author) Format: Kindle Edition
See all formats and editions
Sorry, there was a problem loading this page. Try again.
A Fascinating account of a great sporting life and an insider's look at the byzantine world of soccer politics. The essential Australian story of the World Game - Bob Carr

Johnny Warren is a credit to Australia and the game that he loves. His is a great story which I heartily recommend to all sports fans - Martin Tyler

From a nine-year-old who was initially rejected by his local under-12's team because he was "too small and needed to go home and eat more porridge" to leading the Socceroos from 1964 to 1974 through three World Cup campaigns as captain and vice-captain, Johnny Warren witnessed every stage of Australia's soccer journey for over fifty years.

From the days you were called a "sheila", "wog" or "poofter" if you played soccer to today when players such as Harry Kewell are celebrated as our brightest sporting stars and prized by overseas clubs; from the curse placed on the Socceroos in 1969 by an African witch doctor through to more than thirty agonising years of trying to qualify for soccer's Holy Grail, the World Cup, Johnny Warren revealed the highs and lows of Australian soccer's past and present, and how its future success can be achieved.

Including all the action from the 2002 World Cup - the Cup that caught the hearts and imaginations of Australians everywhere. In February 2003, then-NSW Premier Bob Carr set up a $1.5 million soccer training academy named the "Johnny Warren Soccer Academy" to develop players and increase Australia's chances of securing the 2014 World Cup.
Read more
Previous page
Next page

"A Fascinating account of a great sporting life and an insider's look at the byzantine world of soccer politics. The essential Australian story of the World Game - Bob Carr" --This text refers to an alternate kindle_edition edition.

"Johnny Warren needs no introduction in world soccer circles. His services to the game were acknowledged in 1973 when he became the first soccer identity to be presented with an MBE. In 1988, he was inducted into the Australian Sports Hall of Fame. In 2002 he received an Order of Australia Medal. Johnny was co-host on SBS Television's On the Ball for many years. He died in November 2004." --This text refers to an alternate kindle_edition edition.

Shaheen Badat
5.0 out of 5 stars The legend that is
Reviewed in Australia on 9 October 2018
Verified Purchase
After many years of hearing about this book, I now finally see what all the fuss is about. This should be compulsory for every football fan in Australia
Read more
Helpful
Report abuse
See all reviews

sien
4.0 out of 5 stars A great read for anyone interested in Australian Soccer
Reviewed in the United States on 11 December 2017
Verified Purchase
Sheilas, Wogs & Pooters: An Incomplete Biography of Johnny Warren and Soccer in Australia (2002) by Johnny Warren, Andy Harper and Josh Whittington covers Warren’s great career as a very successful football player and Australian soccer manager, commentator and promoter and provides a simultaneous history of Australian soccer from the late 1950s until the early 2000s.

Warren was in Botany on a street that would, incredibly, provide three representatives of Australia in various sports. He somewhat randomly started to play soccer and was superb at it from a young age, playing in much higher divisions as a junior. As a young man he played for St George-Budapest and encountered European and South American players and styles which had a big impact on him. He also met Les Murray, the great SBS broadcaster while playing for them.

The book goes through the era of clubs made by post-war migration in Australia. The state based competitions were dominated by ethnic Italian, Greek, Hungarian, Jewish and Macedonian based teams.

Warren went on to represent Australia from 1964 until 1974, playing as an attacking midfielder. He also captained the team and was later part of the team that qualified for Australia’s first World Cup, that of Germany in 1974.

After playing he went on to manage and then promote soccer and helped the establishment of the NSL in the late 1970s. He coached Canberra and also helped to bring the New York Cosmos out for exhibition games in Australia.

Warren had written as a soccer journalist since the 1960s. He then joined up with Les Murray and became part of the soccer broadcasters at SBS that did so much for the game in Australia.

njgrouch
5.0 out of 5 stars An entertaining and informative read.
Reviewed in the United States on 10 October 2018
Verified Purchase
A great look inside the characters that help to shape the growth and development of football in Australia.
Truly entertaining.
Read more
Report abuse

Guido
4.0 out of 5 stars Four Stars
Reviewed in the United States on 9 June 2018
Verified Purchase
A nice warm-up before any World Cup whether Australia qualifies or not.
Read more
Report abuse
See all reviews
Back to top
Get to Know Us
Make Money with Us
Let Us Help You
And don't forget:
© 1996-2021, Amazon.com, Inc. or its affiliates