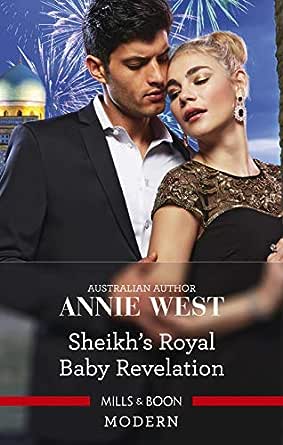 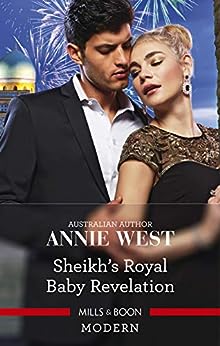 Desert captives for one night... Bound forever by their unexpected baby!

When desert prince Ashraf was kidnapped alongside geologist Tori, their desperation to escape their life-threatening situation led to a moment of passionate oblivion. Rescued the next day, Ash was never able to discover Tori’s fate. He’s finally found her…but in their time apart, Tori has had his son! And now Ash will stop at nothing to claim them both!

Jenny
5.0 out of 5 stars Loved it.
13 September 2019
Format: Kindle EditionVerified Purchase
A great story. Full of intrigue, passion and finally true love. Kidnapped, threatened with being sold, Tori finds herself locked up in a filthy barn when a stranger is also locked away with her and chained up. They spend one night thinking it will be their last together and in each other’s arm. She is taken and hears gunfire realising that he is probably dead. Move forward 15 months and this same stranger is standing in front of her demanding to see his son. Read the book you will love it.
Read more
One person found this helpful
Helpful
Comment Report abuse
See all 1 customer reviews
Write a customer review

DAA
3.0 out of 5 stars Sheikh's Total Baby Revelation
12 October 2019 - Published on Amazon.com
Verified Purchase
This opens with both were kidnapped by his enemies. She from a site in the desert and he from the said enemies targeted for death. They had one night you before they were freed. She thought he had been killed. When fifteen months later she finds out that he is still alive. But there are fractions in country who will do anything to discredit him. Will they get their own happy ending? And what about their son?
Read more

Kindle Customer
5.0 out of 5 stars A very good book
2 September 2019 - Published on Amazon.com
Verified Purchase
I thoroughly enjoyed this book. The h and H met under some extreme circumstances, both had been kidnapped. They found solace in each other arms and she conceived his child. She thought the H had been killed, when showed up later, looking forward her and their son. She didn’t know he was a sheikh. Both characters had childhood issues which made them mistrust others. It held my attention, couldn’t put it down.
Read more

AMZ Customer
5.0 out of 5 stars As expected
23 November 2019 - Published on Amazon.com
Verified Purchase
Great read. These books are always as expected
Read more

Mrs. Helen Sibbritt
5.0 out of 5 stars MS West never disappoints, this one is fabulous
21 August 2019 - Published on Amazon.com
Format: Kindle Edition
Annie West has such a magical way with words, this book is beautifully written, it is a sizzling sensual read that grabbed me from the start when Ashraf and Tori are thrown together both kidnapped and the thought of what may happen the next day brings them together in an impassioned night of joy and bliss, fifteen months later Ash finally finds Tori and discovers he has a son Oliver, now he must convince Tori that moving to his country is best for them all.

Victoria Nilsson grew up with a political father who was always putting his position first and Tori rebelled as soon as she could, studied to become a geologist and travelled around the world, when she is in the deserts she is kidnapped, and her life changes forever. Thinking that the man she had the most amazing night with is dead she carries on bringing up her son when Ash appears, she is stunned when she realizes he is a Sheikh and not too impressed when he is pushing her to marry and return to his country, but she is willing to visit and see how things go.

Ashraf is now ruler of his country, he has been treated badly by his own family growing up and never expected to be ruler and he takes on the position with caring and honesty doing what is best for his people, when he is kidnapped and about to be killed but is saved at the last moment but he never forgets the beautiful Tori, the woman he is determined to find and when he does he now needs her with him at all times, he needs to make sure his son has a better life that he did, but loving someone is hard for Ash.

I have a soft spot for Sheikh stories and this one hit it so well, oh my what a hero Ash is, he made my heart melt and Tori beautiful inside and out and so caring, but also determined never to be ruled like her mother was, so when they finally realize that they are so very much in love after a few ups and downs the joy and happiness flows through the words, I loved this one a highly recommend it, thank you MS West you made me smile.

Read more
One person found this helpful
Go to Amazon.com to see all 18 reviews 4.6 out of 5 stars
Get FREE delivery with Amazon Prime
Prime members enjoy FREE Delivery and exclusive access to movies, TV shows, music, Kindle e-books, Twitch Prime, and more.
> Get Started
Back to top
Get to Know Us
Make Money with Us
Let Us Help You
And don't forget:
© 1996-2020, Amazon.com, Inc. or its affiliates