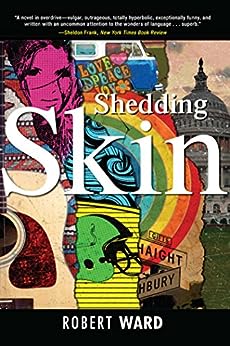 3.1 out of 5 stars
3.1 out of 5
2 global ratings
How are ratings calculated?
To calculate the overall star rating and percentage breakdown by star, we don’t use a simple average. Instead, our system considers things like how recent a review is and if the reviewer bought the item on Amazon. It also analyses reviews to verify trustworthiness.

Chas Hansen
5.0 out of 5 stars Slip Me Some Skin...
Reviewed in the United States on 26 October 2013
Verified Purchase
Robert Ward’s Shedding Skin stays as true to its title as any novel I have ever read. If you think that's a comfort you would be wrong. Like the times from whence it sprung, what we have here is a riot of laughs and despair and is worth every moment spent there.

Whether one sees the 60s as a great leap forward or nothing but a chance to get laid, Ward has it all covered and hilariously so.

Want something funny to read? How about a story that features “A Buffalo with Kissable Lips.”
Read more
One person found this helpful
Report abuse

There couldn't be a more succinct novel which showcases exactly why those glorious days of flower power, peace, free love, rampant drug use, anarchy, and revolution were doomed from the start. The only saving grace for people who lived this lifestyle is the fact that AIDS was not a part of the equation; had it been, many in this generation would have died in their 30s or 40s, victims of their need to not conform. The only saving grace for this book is that it was written during those tumultuous times, so it seemingly reflects the inane ramblings of the day.

The fact that it won a National Endowment for the Arts award in 1972 is no great mystery, what with the liberal mindset of the times and the willingness to showcase pap like this to try and create the idea that this sort of nonsense was normal.

You know what I mean, man... It's like "Piss Christ" (a 1987 photograph of a Crucifix submerged in a glass of the photographer's urine) being hailed by this same institution as an important work of art. Different decade, same stupid decisions out of people claiming to represent US. Groovy, I mean like... mind-blowin' stuff man.

I thought that perhaps this book was an aging Hippie's current deluded ramblings about the self importance of his jaded past; but I find that in reality, it's worse. These words were written in the middle of those times and are therefore somewhat excusable, but they have now been dredged back up to highlight the deluded ramblings of that now aging Hippie.

Whoa... May the circle be unbroken.

Look, every one of us who lived through those times has stories to tell but most of us have moved beyond bragging about our shortcomings (and youth-induced lack of brains) and would be mortified to rehash our sordid pasts as if they were some holy grail of could-have-beens.

I guess it comes down to what makes you more proud... the ignorance of your youth, or the nature by which you conduct yourself in the present.
Read more
3 people found this helpful
Report abuse
See all reviews
Back to top
Get to Know Us
Make Money with Us
Let Us Help You
And don't forget:
© 1996-2021, Amazon.com, Inc. or its affiliates