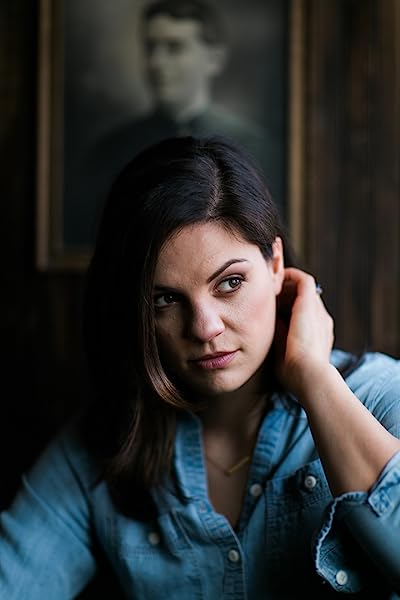 She Regrets Nothing: A Novel Audio CD – Unabridged, 1 March 2021

by Andrea Dunlop (Author)
4.1 out of 5 stars 81 ratings
See all formats and editions
Sorry, there was a problem loading this page. Try again.

The forgotten granddaughter of one of New York's wealthiest men is reunited with her family just as she comes of age—and once she's had a glimpse of their glittering world, she refuses to let it go without a fight.

When Laila Lawrence becomes an orphan at twenty-three, the sudden loss unexpectedly introduces her to three glamorous cousins from New York who show up unannounced at her mother's funeral. The three siblings are scions of the wealthy family from which Laila's father had been estranged long before his own untimely demise ten years before.

Two years later, Laila has left behind her quiet life in Grosse Point, Michigan to move to New York City, landing her smack in the middle of her cousins' decadent world. As the truth about why Laila's parents became estranged from the family patriarch becomes clear, Laila grows ever more resolved to claim what's rightfully hers. Caught between longing for the love of her family and her relentless pursuit of the lifestyle she feels she was unfairly denied, Laila finds herself reawakening a long dead family scandal—not to mention setting off several new ones—as she becomes further enmeshed in the lives and love affairs of her cousins. But will Laila ever, truly, belong in their world?
Read more
Previous page
Next page

Andrea Dunlop lives in her hometown of Seattle, Washington, where she works as the social media and marketing director of Girl Friday Productions.

Start reading She Regrets Nothing: A Novel on your Kindle in under a minute.

Andrea Dunlop is the author of SHE REGRETS NOTHING, LOSING THE LIGHT, and the forthcoming WE CAME HERE TO FORGET. She lives in Seattle, WA with her husband and daughter.

4.1 out of 5 stars
4.1 out of 5
81 global ratings
How are ratings calculated?
To calculate the overall star rating and percentage breakdown by star, we don’t use a simple average. Instead, our system considers things like how recent a review is and if the reviewer bought the item on Amazon. It also analyses reviews to verify trustworthiness.

Karen
1.0 out of 5 stars Really Awful.
Reviewed in Australia on 20 August 2018
Verified Purchase
I don't know why I wasted my time on this book. It was terrible. There was little to no character development and there was no resolution to some of the bigger questions I had.
Read more
Helpful
Report abuse
See all reviews

Kendra Fehr
3.0 out of 5 stars I'd recommend "Crazy Rich Asians" as a counterpart to this lazy ...
Reviewed in Canada on 21 July 2018
Verified Purchase
This book is rife with pop-culture and luxury brand references as well as stereotypes painted with the broadest of strokes: broad strokes that didn't really convince me that the author did her homework or had insight into this world of the uber rich. In addition, as a Canadian, it made me infinitely annoyed that they referred to Banff and a "small town close to Alberta." If that isn't lazy research, I don't know what is. Banff is a hectic tourist town in a national park in the province of Alberta where few people live and many people visit. It's not a quaint little "off the grid" village where people go to hide from their dysfunctional wealthy families. In the end, I gave the book 3 stars because the power plays between the characters were interesting, and, after tolerating the first few chapters, I became immersed in wanting to know how the relationships played out. If you want to read a guilty pleasure book about the fabulously rich, I'd recommend "Crazy Rich Asians" as a counterpart to this book as the research seems a bit more convincing.
Read more
Report abuse

carilynp
5.0 out of 5 stars A fast-paced fantastic read
Reviewed in the United States on 13 February 2018
Verified Purchase
Fresh from the Midwest to Manhattan, Laila, now an orphan, discovers long lost family members whom she is determined to find a way to fit into their tight knit circle. This is Andrea Dunlop’s novel SHE REGRETS NOTHING.

Fast-paced, juicy, and cliquish, the Lawrence children are unaware of how others need to work, get along without trust funds, and, get by on a clothing budget. As if. When they become acquainted with their cousin Laila’s existence, whose lifestyle is nothing like theirs, they cannot relate. Little do they know that their new-found cousin will not let that get in her way.

The plot thickens as secrets from the past are kept and new ones are made. Is history destined to repeat itself? This is a tale that serves havoc on a silver platter, as loyalty is tossed out the penthouse window.

Laila’s hot pursuit to get her hands on a sugar daddy makes this an exhilarating story and a booklover’s dream.

Jenna
2.0 out of 5 stars Fell Short of Expectations
Reviewed in the United States on 4 July 2021
Verified Purchase
- Physical Condition: The book was listed as gently used but was brand new.
- Book Review (NO SPOILERS!): This book was a page-turner for the first 100 or so pages but then began to drag. The chapters acted as sloppy shifts of perspective as the book went on. The ending was quite abrupt and did not make sense with the developing storyline. Overall, a 2/5 book, would not recommend.
Read more
Report abuse

flashmomof3
3.0 out of 5 stars It's Ok
Reviewed in the United States on 15 May 2020
Verified Purchase
Decent plot but some parts were like crawling through mud. Took me longer to finish than I thought because I began losing interest.
Read more
Report abuse
See all reviews
Back to top
Get to Know Us
Make Money with Us
Let Us Help You
And don't forget:
© 1996-2021, Amazon.com, Inc. or its affiliates