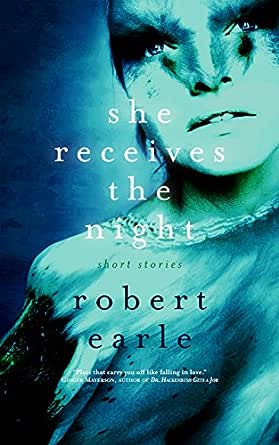 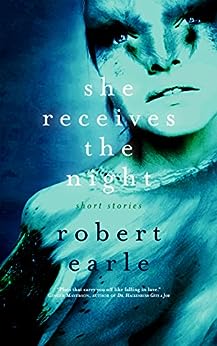 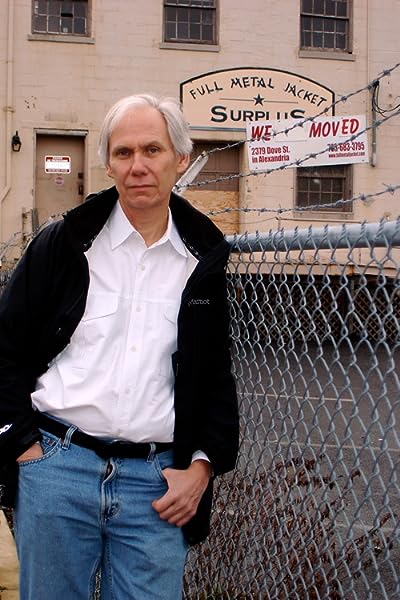 She Receives the Night Kindle Edition

"She Receives the Night masterfully exposes the yielding cracks and deep crevices of humanity in all their grit and darkness--and, with equal precision and splurges of hope, bathes them in light." ELIZABETH DAY, AUTHOR OF LIVING WITH GUSTO

"The depth and glow in Robert Earle's writing comes from living in the world, and fearlessly seeing beyond its surfaces. The elegant prose, complex characters, and plots that carry you off like falling in love, make his work a rewarding pleasure to read." GINGER MAYERSON, AUTHOR OF DR HACKENBUSH GETS A JOB

"Earle has an eerie way of drawing the reader deeply into the inner worlds of the women he writes about, transmuting lived experiences into poignant tales that remind us that though the night is long, dawn eventually breaks, and we are all the stronger for it. Overall a stirring and insightful collection." MEHREEN FATIMA ASHFAQ, FICTION EDITOR, THE MISSING SLATE

"Robert Earle's brilliant new book, She Receives the Night, is a dazzling collection of short stories that you'll find difficult to put down. Earle's precise, confident voice guides us from the nightmares of the dispossessed along the rocky paths and vast range of human experience to fully realized acceptance of the human condition. These rewarding and compelling stories present vivid characters in sometimes exotic settings that will stay with you because they are true and profoundly human. In the closing story, the narrator reminds us of the journey we've taken, thanks to Earle's mastery of the written word and keen eye for 'Unimportant but intimate things, tender things, frightening things, all shared in a kind of rattle of words between dips in the suspect waters of the Atlantic full of seaweed and who knew what else.' I strongly encourage you to read and enjoy these memorable stories." GEORGE KOVACH, EDITOR, CONSEQUENCE MAGAZINE

"I couldn't help but think, as I read Robert Earle's sterling and cosmopolitan collection She Receives the Night, of that experimental writer Henry James. Earle is a master de-laminator of that stratified Jamesian character depth, excavating earned and earnest transparent, but amplified epiphanic stares (boketto on steroids) into the slipping and stuttering machinery of night. 'Experimental' in that he wrangles, like Henry, the new dynamic birthed from the Hieros Gamos of unconscious inner impulse and viral traumatic software, playing out the many permutations that are still percolating of secrets kept and revealed. Robert Earle--empathetic Brahmin of voices, gestures, and telling looks--out-looks James, out-Jameses James, in this lavish laboratory of sublime emotion and rare earth reality." MICHAEL MARTONE, AUTHOR OF MICHAEL MARTONE AND WINESBURG, INDIANA

With more than 100 stories in print and online literary journals, Robert Earle is one of the more widely published contemporary writers of short fiction. He also is the author of the novels, Suffer the Children, In the Blood of Herod and Rome, and The Way Home, and books of nonfiction, Nights in the Pink Motel and Identities in North America. He was a diplomat for two decades (Latin America, Europe, Middle East) and has degrees in literature and writing from Princeton and Johns Hopkins, respectively. He lives in Chapel Hill, North Carolina. Visit Robert online: robertearle.me --This text refers to the paperback edition.

Squeaky Joe
5.0 out of 5 stars Beautifully told stories
Reviewed in the United Kingdom on 5 August 2017
Verified Purchase
Short story collections are often used to display a writer’s range of skills – whether in dialogue and description, or in their ability to handle a variety of different writing styles and genres. On the other hand, such collections can equally present a handful of the crap at the bottom of the author’s literary barrel, or to put it another way, a place to accumulate all the stuff that won’t fit anywhere else.

The latter option is not one of those books. 'She Receives the Night' is a fascinating and completely absorbing collection of brilliantly written and beautifully told stories that show off the author’s talent like the shining star it is. Even if you hate short stories, you’ll find something here that will move you, bring you to tears, or fill you with a nice warm glow at the sheer luck of finding such a wonderful book. My own favourite was 'With her Ear Pressed to the Earth', where the simple act of a young man wanting to change his name through marriage, results in an unraveling of his whole relationship. The story had me flicking through the pages with something approaching breathlessness. In truth, the beauty of the language at times left me panting. How can anyone write so damn well?

Melanie Rigney
5.0 out of 5 stars Masterful Storytelling about Women around the World
Reviewed in the United States on 13 August 2017
Verified Purchase
It took me a while to get through this collection, because each is a gem to be regarded, contemplated and treasured. Being a woman means something different to each protagonist, and Earle manages to get deep inside each one's skin. The voice is confident and assured, yet vulnerable. I found myself in tears over Na Cheon in "Who Has a Real Castle Where I Can Hide?" and Annie in "Pivot Point," smiled at the way parts of Kristina in "With Her Ear Pressed to the Earth" were similar to friends' stories, and hoped for the best for Libby in "My Name Is Libby." Lovely reads, all. Be prepared to get lost in these stories.
Read more
Report abuse

Rick B
5.0 out of 5 stars Great stories!
Reviewed in the United States on 5 January 2020
Verified Purchase
Discomfiting at times, raw at others. Always compelling. I can't remember reading a collection of stories with more variety, let alone with the focus squarely on the female characters. Earle does a spectacular job of getting into the heads of the women he portrays, imbuing them with depth, intellect and passion.
Read more
Report abuse

RoCo
5.0 out of 5 stars Short story readers will love!
Reviewed in the United States on 13 July 2017
Verified Purchase
I am a short story reader from way back. I look for both catharsis and that crystallized moment in a story when a human truth is revealed in a new way. She Receives the Night by Robert Earle has both these elements. The stories are sensitively written and gripping. I strongly recommend this book. If you love William Trevor, Elizabeth Strout and Alice Munro, you will find here a new source for kinship and revelation.
Read more
Report abuse

Amazon Customer
5.0 out of 5 stars A wonder of prose and insight.
Reviewed in the United States on 29 August 2017
Verified Purchase
If you love wonderful prose and insight into the lives of people, you must read this wonderful book of short stories. I frequently found myself re-reading paragraphs and appreciating the author's ability to Dwight me and draw me into each story. The best compilation of short stories I've read in a very, very long time.
Read more
Report abuse
See all reviews
Get FREE delivery with Amazon Prime
Prime members enjoy FREE Delivery and exclusive access to movies, TV shows, music, Kindle e-books, Twitch Prime, and more.
> Get Started
Back to top
Get to Know Us
Make Money with Us
Let Us Help You
And don't forget:
© 1996-2020, Amazon.com, Inc. or its affiliates