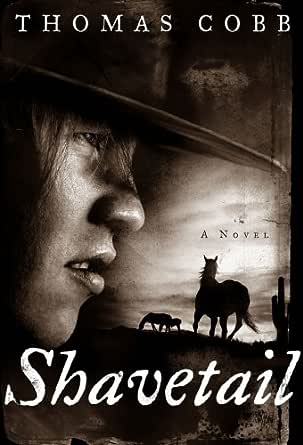 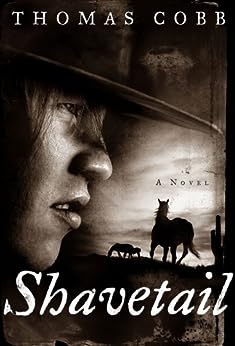 "The education to which Thomas Cobb's eager young soldier is forced to submit combines such wisdom, pain, suspense, and nasty good humor that I simply couldn't read this book fast enough. Of course I didn't know what a 'shavetail' was when I began, but learning that was only part of the education I was treated to. Guilt and innocence, blood and tenderness -- I can't imagine any reader who could resist."

"Shavetail is the story of the futility of war and is as immediate and brutal as daily news from Iraq or Afghanistan, although the year is 1871 and the place is southern Arizona and northern Mexico. Cobb presents the landscape, the characters, and the conflict with absolute authority, producing a magnificent story in the tradition of Stephen Crane's The Red Badge of Courage and Cormac McCarthy's Blood Meridian."

-- Richard Shelton, author of Going Back to Bisbee --This text refers to an out of print or unavailable edition of this title.

Thomas Cobb was born in Chicago, Illinois, and grew up in Tucson, Arizona. He is the author of Crazy Heart, a novel, and Acts of Contrition, a collection of short stories that won the 2002 George Garrett Fiction Prize. He lives in Rhode Island with his wife. --This text refers to an out of print or unavailable edition of this title.

4.0 out of 5 stars
4 out of 5
21 global ratings
How are ratings calculated?
To calculate the overall star rating and percentage breakdown by star, we don’t use a simple average. Instead, our system considers things like how recent a review is and if the reviewer bought the item on Amazon. It also analyses reviews to verify trustworthiness.

Kindle Customer
4.0 out of 5 stars A good read..............
Reviewed in the United Kingdom on 12 November 2012
Verified Purchase
This book won the 2009 Best Western Long Novel, which was a good recommendation for me to read Thomas Cobb's story.
The novel is told from from several characters' points of view, and each of these has an issue which visits them during their interactions. Suffice it to say their failings and fragilities lead to their difficulties as their Army Patrol crosses into Mexico chasing Apaches. My major criticism of Cobb's story that having spent over two thirds of the book creating a tense interplay between Captain Franklin, Lieutenant Austin and Private Thorne, he seems to force an ending in the last third which although tense and believable is a little manufactured.
The publisher mentions comparisons with Larry McMurtry and Cormac McCarthy which are valid. But Cobb will need more books of quality (which this book is) to keep up the high level of comparison.

David W Putnam
4.0 out of 5 stars Great read
Reviewed in the United States on 1 April 2020
Verified Purchase
4 1/2 stars
Really enjoyed this book. I can see how it wouldn't be for everyone. This book is compared by some, to Blood Meridian; another book that I loved. But I don't think this book has the same depth. The story is set in 1868 Arizona Territory. There are Indians, and army cavalry, and brutality from nature, the Mexican army and the Indians. The story doesn't pull any punches and tells it like it really happened (as evidenced by the meticulous research by the author). The details are vivid and stunning. The life of an army trooper was not a glamorous one. I found it difficult to put this book down. And I continue to think about even after I finished. What I didn't like was the lack of transitions in between scenes. I found myself going back to make sure I had not missed a page. Otherwise this would've been a five solid stars. I highly recommend this book for those who like a realistic oater with a story that moves along at a steam engine's pace.
David Putnam

Richard L. Pangburn
5.0 out of 5 stars Five stars as a western, and five stars as a literary novel
Reviewed in the United States on 22 February 2010
Verified Purchase
This was last year's Spur Award Winner for best western novel, and indeed, it is a deserving winner. It is also a very fine literary novel and, as the dustjacket burbs and notes indicate, this will appeal to mainstream readers as well as to fans of Cormac McCarthy and Larry McMurtry.

A naturalistic novel, the plot builds around the possible abduction of a woman by Apaches. Like Helen of Troy, she becomes a mythic symbol, a cause for war, a McGuffin which may be real or may be wrongly imagined. Although quite a few westerns were built on similar premises, Thomas Cobb's fine novel is not predictable. Reading it, you feel like anything might happen. Try to guess and be surprised. There is no good-guy/bad-guy dualism; instead there are human universals and a sense of naturalism.

The snake in the opening paragraph, "suspended in a state neither asleep nor awake," seems to be a literary metaphor for death-in-life, as later their are suggestions of an awakening of mindfulness. Different readers will see different levels of meaning, but it is still fine if you see nothing beyond the surface story in here.

It is no spoiler here to say the book has an ending that all should enjoy, conventional western readers as well as mainstream readers of literary novels. The author did his historical research and he names his sources in an afterword to the novel. The story is well paced and although there are many nuances, they are not Cormac McCarthy difficult-to-discern. The hardcover edition is handsome and easy to read.

Given the success of Thomas Cobb's CRAZY HEART, of the movie made from the book, it will not be long until Hollywood powers see the potentially great movie in SHAVETAIL. I look forward to that day.

Those who enjoyed this novel should also enjoy John Williams's BUTCHER'S CROSSING (published back in 1960 but recently rediscovered and soon to be a movie), Robert Olmstead's FAR BRIGHT STAR (2009), and Frank O'Rourke's A MULE FOR THE MARQUESA (1964) which was made into a fine 1966 Lee Marvin film renamed THE PROFESSIONALS.
Read more
8 people found this helpful
Report abuse

Deadeye Dick
4.0 out of 5 stars This would make a great movie
Reviewed in the United States on 5 September 2013
Verified Purchase
In the 20th Century newby officers were called shavetails. In the old cavalry that is how the mule skinners (packers) distinguished raw, untrained mules from the reliable, fully trained pack mules. Cobb works in the term to apply to the subject in this book as a new member of an Arizona cavalry troop stationed at a remote outpost in SE Arizona, and his rough start in life and the cavalry where he goes to escape his past in the East.

He is taken under the wing of an unscrupulous corporal with a dishonest bent, and contrastingly, a pair of officers who are banished to the end of the earth by General Crook for bad decisions in the Indian Wars further North while fighting the Cheyenne and the Sioux. He earns his spurs the hard way and survives some seriously bad turns, while carrying a guilt he bore from his youth in the East.

This and another of Cobb's books, With Blood in Their Eyes, have particular appeal to be, as I am a student of history, and live in the area in which Cobb's novels are set, and can identify many of the places about which he wrote, and can follow the characters on a mental map inside my head. He also authored Crazy Heart, a movie that I liked very much. I plan to read that one also.
Read more
One person found this helpful
Report abuse

Chad M. Supp
4.0 out of 5 stars Too bad Sam isn't around to direct the film.
Reviewed in the United States on 16 October 2010
Verified Purchase
I read Thomas Cobb's "Shavetail" immediately on the heels of completing Bruce Machart's "The Wake of Forgiveness". Reading them back-to-back presented a unique contrast of styles in the genre, and an interesting perspective on how casually Cormac McCarthy and Larry McMurtry are tossed around when reviewing westerns. I wouldn't compare either author to Cormac McCarthy, but if I had a center-fire Colt .45 placed to my head, I would say Machart fairly draws comparisons on the basis of the density of his prose. But that is where I think it ends. Cobb's prose doesn't share that kind of density, and it's somewhat of a relief. Not to say Cobb's work is any less literary. His prose is lean, but rich and descriptive. And where others in the genre shy away from dialogue in favor of long, scenic narrative tapestries, Cobb's characters come to life in their speech. Dialogue can be underrated, and frankly some writers are just flat-out bad at it (anyone who has read anything by Stephen Hunter knows what I'm talking about), but Cobb has proven in just two novels (this and "Crazy Heart") that his true strength may be letting his characters speak. In that, he shares something with McMurtry, but I don't see any McMurty in "Shavetail". If comparisons must be made, I would say the one name that kept popping into my head as I read this novel was Peckinpah. While I didn't sense any "Border Trilogy" or "Lonesome Dove" in "Shavetail", what I did sense was some "Ballad of Cable Hogue", a little "Ride the High Country", and a whole helluva lot of "Major Dundee". Cobb may not give you the prose to chew on like some other noted authors, but he definitely gives you the characters. If it's the prose you prefer, I recommend you search for Bruce Machart's "The Wake of Forgiveness". You won't be disappointed in that either.
Read more
4 people found this helpful
Report abuse
See all reviews
Get FREE delivery with Amazon Prime
Prime members enjoy FREE Delivery and exclusive access to movies, TV shows, music, Kindle e-books, Twitch Prime, and more.
> Get Started
Back to top
Get to Know Us
Make Money with Us
Let Us Help You
And don't forget:
© 1996-2020, Amazon.com, Inc. or its affiliates