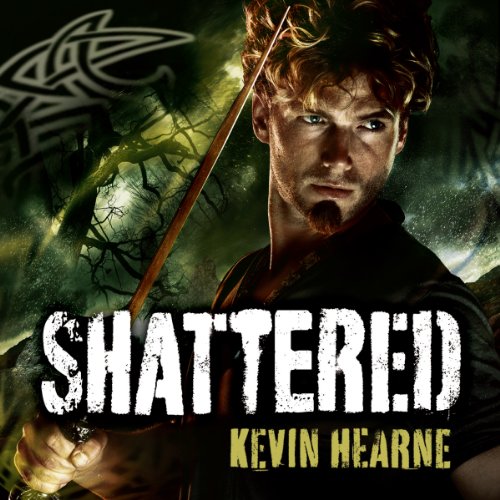 For nearly two thousand years, there was only one Druid left walking the Earth - Atticus O'Sullivan, the Iron Druid, whose sharp wit and sharp sword kept him alive while pursued by a pantheon of hostile deities. Now he's got company. Atticus's apprentice Granuaile is finally a full Druid herself. What's more, Atticus has defrosted an archdruid long ago frozen in time, a father figure (of sorts) who now goes by the modern name Owen Kennedy. And Owen has some catching up to do.

Atticus takes pleasure in the role reversal, as the student is now the teacher. Between busting Atticus's chops and trying to fathom a cell phone, Owen must also learn English. For Atticus, the jury's still out on whether the wily old coot will be an asset in the epic battle with Norse god Loki - or merely a pain in the arse. As the trio of Druids deals with pestilence-spreading demons, bacon-loving yeti, fierce flying foxes, and frenzied Fae, they're hoping that this time...three's a charm.

Switch between reading the Kindle book & listening to the Audible narration with Whispersync for Voice.
Get the Audible audiobook for the reduced price of $9.99 after you buy the Kindle book.
Learn more about membership
By completing your purchase, you agree to Audible’s Conditions Of Use and Privacy Notice.
Sold and delivered by Audible, an Amazon company
Share

4.6 out of 5 stars
4.6 out of 5
1,260 global ratings
How are ratings calculated?
To calculate the overall star rating and percentage breakdown by star, we don’t use a simple average. Instead, our system considers things like how recent a review is and if the reviewer bought the item on Amazon. It also analyses reviews to verify trustworthiness.

rewand
5.0 out of 5 stars And the journey continues
Reviewed in Australia on 8 August 2014
Verified Purchase
There were a few posts of fans that were dissappointed that we had 3 separate narratives in this latest instalment, Atticus of course, Granuaile his apprentice and Owen his archdruid. I must say I enjoyed getting to know the other characters in much more depth and finding myself getting attached to their lives as Kevin has attached me to Atticus's life and journey. All I can say Kevin is keep that midnight oil burning I finished this way too quickly.
Hands up - 'Can I have the next one please sir?!
Read more
Helpful
Report abuse

Susan
3.0 out of 5 stars Not as good as previous books
Reviewed in Australia on 11 May 2017
Verified Purchase
As always the characters are understandable and generally good company. However this story is told in the voices of the 3 Druids, who go their separate ways for most f the book. This reduced the enjoyment of their interaction. So do read it, just don't expect it to be as hard to put down as usual in this series.
Read more
Helpful
Report abuse

Norman R Bohm
4.0 out of 5 stars Waiting for the next instalment
Reviewed in Australia on 9 July 2014
Verified Purchase
This has been a very interesting series, fast paced, like that, not too many referals to past books, happy bout that, as a reader, you know what happened before, so looking forward to next chapter, and the fierce druid, hopefully has more impact on story line:
Read more
Helpful
Report abuse

Sharmane Devlin
5.0 out of 5 stars Iron love
Reviewed in Australia on 3 January 2015
Verified Purchase
Honestly the best series I have read in years. If you don't fall in love with it from book 1 there's something wrong with you
Read more
Helpful
Report abuse

School
5.0 out of 5 stars Couldn't put it down!
Reviewed in Australia on 17 July 2014
Verified Purchase
I hope you keep writing! This was entertaining, funny and serious in perfect balance. A fantastic read. Thanks for making my holiday enjoyable.
Read more
Helpful
Report abuse

Joanne Kelly Cupit
4.0 out of 5 stars Bring on the next one
Reviewed in Australia on 6 August 2014
Verified Purchase
Nice - can't wait for the next one
Read more
Helpful
Report abuse

This book earned it's five stars, I look forward to recommending it to all my friends and I expect to reread it several times over the years.
Read more
Helpful
Report abuse
See all reviews

The plot sees the characters split up on separate adventures, but nevertheless feels like it's treading water again - more about moving the pieces into position for a forthcoming finale rather than actually telling a self-contained story.

My interest fell mainly with the secondary characters, each of whom at least have an emotional arc and are exploring new things, but overall the plot didn't grip me and I found some passages particularly dense and hard to ingest.

I'm not out off enough to abandon the series, but I am kind of feeling glad it's almost over, as it already seems a bit dragged out. Perhaps once it's wrapped up I'll be better able to appreciate the individual parts.
Read more
Report abuse

Kindle Customer
3.0 out of 5 stars Vegetarian nonsense
Reviewed in the United Kingdom on 17 February 2021
Verified Purchase
I've had to skip to the end to register my annoyance about this lazy ducking stereotyping.
Five seconds on Google informs me that 20% of Indians are vegetarians, but the author couldn't be bothered to check?
I know it's a long way from Arizona, but do your homework for godsake, basic details that are just wrong break you out of the story 😡
Read more
Report abuse

CathyR
5.0 out of 5 stars Shattered ~ loved it
Reviewed in the United Kingdom on 25 June 2014
Verified Purchase
This series just gets better and Shattered, if anything, raises the bar. The research and seamless intermingling of gods from everywhere is incredible and works amazingly well in the context of the storyline. And the writing is glorious with all the humour and detail delivered in spades.

Atticus’ old archdruid, who was frozen in time by the Morrigan on Tír na nÓg, for the last 2,000 years, has been resurrected, so to speak. Owen, as he is now known, is a fun character with his grumpy ways and Old Irish cussing. Atticus’ attempts to acclimatize Owen, and bring him up to date with the world he now finds himself in, are hilarious and I love the interaction between the two of them. Owen very quickly becomes an integral part of the story.

Although I’m not generally a huge fan of multiple points of view, in this instance the threefold narration works because Owen, Atticus and Granuaile are in different places a lot of the time. It adds immensely to the development of each character too while they are independent of each other. Atticus has matured and his principles, compassion and wisdom have grown accordingly.

Granuaile travels to India after a message from Laksha, and from there to the Himalayas to meet the hockey loving Yeti (amazing!) She faces difficult problems without Atticus for the first time, with terrible consequences. The scenes with Granuaile and her father, and then her mother too, are so well written the emotion is just palpable.

I love the addition of Orlaith, I’m glad it’s time for Oberon to have a companion. And, of course, Oberon and the interaction between him and Atticus, is as funny and entertaining as ever.

Atticus discovers who his unknown enemy is and it’s a shock, to say the least, for all concerned. There’s a huge all out battle with several fatalities. But also a lot of introspection from the gods, druids and the Tuatha Dé Dannan, about mistakes made, opportunities missed and decisions taken. The conclusion and the epilogue sets the scene nicely for the next book.

Luke Daniels’ narration is an absolute pleasure to listen to, with all the amazing characterisations…and there are lots of them. It must be a feat in itself to keep them all in order. Nevertheless they are all carried out with assurance and skill, incorporating the humour of the writing. Extremely entertaining.
Read more
3 people found this helpful
Report abuse

Amazon Customer
5.0 out of 5 stars Read it -if you've got this far, you have to!
Reviewed in the United Kingdom on 12 July 2014
Verified Purchase
I think this was a favourite one so far. While I really enjoyed Atticus' voice, using Granuaile and Eoghan really help keep the books fresh and alive and since Granuaile in particular has her own adventures in this one, it was nice to read about them from her point of view. It is always clear who's POV we're seeing as well - a testament to the author's skill.

Eoghan brings another quality to the books as well - an older, more cynical and definitely a more basic view of things. I hope we hear more from him in future books. And he is capable of tenderness :) Loved that scene!! (Read the book and you'll know the one I mean :))

Heart stopping moments are becoming more frequent and there were times when I wanted to punch the author, but it's a great story and I can't wait for the next one to be released!
Read more
One person found this helpful
Report abuse

Mrs S Revill
4.0 out of 5 stars Good but not the best
Reviewed in the United Kingdom on 29 July 2021
Verified Purchase
I have enjoyed all the previous ones &love the short Oberon stories however this one hit a low patch for me in the middle although it was probably needed for the story. If you have enjoyed the ones before u will probably like this but only 4stars rather than the 5stars I normally expect
Read more
Report abuse
See all reviews
Back to top
Get to Know Us
Make Money with Us
Let Us Help You
And don't forget:
© 1996-2022, Amazon.com, Inc. or its affiliates