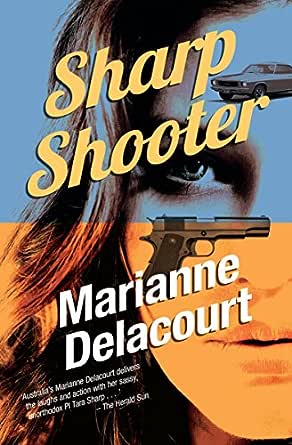 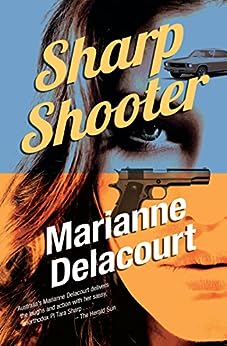 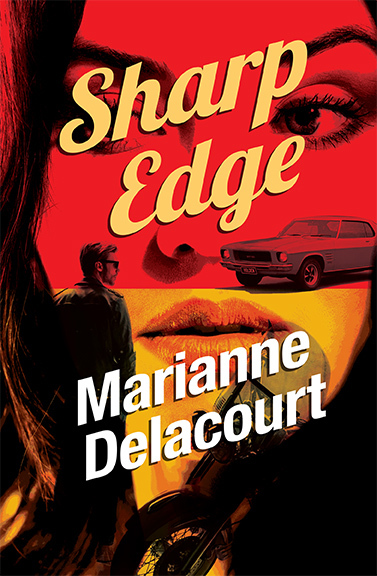 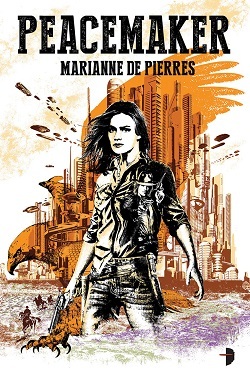 Tara Sharp can see auras, and it’s ruining her life.

When she tries to turn her inconvenient secret into a paying gig, her first job lands her in the middle of a tug of war between the biggest, baddest crime lord in town and the hottest business man Tara has ever met.

With only a narcoleptic ex-roadie, her pet galah and a vanilla slice for back up, Tara is ready to take on trouble with a capital ‘T’.


REVIEWS:
“Light, fast-paced, humorous, and yes, sharp, this Perth-based series is a lot of fun to read. As the cover declares, Delacourt has created a heroine Janet Evanovich fans will love – only this lanky lady is pure Aussie. You’ve not met anyone quite like her.” – Tara Moss’s Book Club, 13th Street

“Tara Sharp is a gust of fresh air in the local crime fiction scene. While it is wonderful that our more literary crime writers are finally getting the attention they deserve, there’s still plenty of room for fast-paced commercial female-oriented Australian crime fiction. And Marianne Delacourt (aka sci-fi writer Marianne de Pierres) has certainly nailed that brief. – The Australian Bookseller and Publisher.

“Marianne Delacourt’s heroine – Perth PI Tara Sharp – invites comparison with Janet Evanovich’s Stephanie Plum, and there’s no doubt if you’re an Evanovich fan you’ll enjoy this. Sharp, however, has the added wrinkle of being able to read peoples auras, as much a curse as a blessing.” – Scoop Magazine

Trevor Willmot
4.0 out of 5 stars Refreshing, so Australian,very funny if your mind works that way!
20 June 2017
Format: Kindle EditionVerified Purchase
Really enjoyed this, sort of refreshing & raw, like the sunlight down under. As a Kiwi the colloquialisms etc are well known & understood but not so often seen in print like this, sort of like a literary crime version of Crocodile Dundee! Some will"get it" some may just find it sort of crude & unpolished perhaps. If you want a humorous lighthearted crime fantasy as a break from the heavy dark stuff this is well worth a look. I am looking forward to the next one.
Read more
3 people found this helpful
Helpful
Comment Report abuse

Toots Sullivan
TOP 100 REVIEWER
5.0 out of 5 stars Great fun with deadly crazies
17 October 2018
Format: Kindle EditionVerified Purchase
I loved this book! It has suspense by the bucketload, great Australianisms, terrifically Cooky, normal, eccentric and a way different cast of characters that with whip smart writing and a fast paced plot even when the leading isn’t being chased by cars all combine to make a great book. Laugh, smile, worry, fear and feel relief.
Read more
Helpful
Comment Report abuse

LaneyO
5.0 out of 5 stars A rollicking adventure from start to finish.
25 May 2016
Format: Kindle EditionVerified Purchase
This highly unusual hero reads auras and is at first scared of her ability. But when she meets a mentor who helps her understand how unique her ability is and how it can be used to help other people she is off on a life-changing adventure. Strong, compassionate and dependable she is drawn into the lives of other people and puts herself in great danger to help them.
This book has a fast pace that we are used to from Marianne and the hero's unusual abilities, feisty attitude and loyalty to her friends and family endear her to the reader. While it could be considered a crime novel, it also has the flavour of chic lit novel.

I am a fan of Marianne's books and this one didn't disappoint. I can't wait for the next.

Jen
5.0 out of 5 stars Rockin’ good yarn
16 December 2018
Format: Kindle EditionVerified Purchase
Intriguing combination this - auras, micro-expressions, lots of lovely tall people (including the admirable female lead, Tara), a smattering of violence, mystery and suspense, and great humour! Thoroughly enjoyable and a great Perth snapshot into the bargain tho my life is mostly “south of the river”.
Read more
Helpful
Comment Report abuse

Keith
TOP 500 REVIEWER
5.0 out of 5 stars Thoroughly entertaining
14 June 2017
Format: Kindle EditionVerified Purchase
A thoroughly entertaining suspense novel. This is book 1 and I am eager to read new books in the series. Characters are well rounded if not always what you would expect but the plot is very diverse and keeps you wanting more. Hard to put down.
Read more
One person found this helpful
Helpful
Comment Report abuse

Daranem
TOP 1000 REVIEWER
5.0 out of 5 stars Laugh out loud action
11 July 2017
Format: Kindle EditionVerified Purchase
Loved it. It's along the lines of Stephanie Plum's books, but this heroine thinks a bit more. The action keeps you entertained and the characters are delightful. Will read more of the series.
Read more
One person found this helpful
Helpful
Comment Report abuse

Amazon Customer
4.0 out of 5 stars Fast action with a softer side.
16 June 2017
Format: Kindle EditionVerified Purchase
A good way to loose yourself in the thrill of the chase. No doubt about action there is plenty to keep the story going. If you like intrigue and working out the plot this book has it in abundance. Four stars for the detail.
Read more
One person found this helpful
Helpful
Comment Report abuse
See all 21 customer reviews
Write a customer review

Go to Amazon.com to see all 395 reviews 4.3 out of 5 stars
Get FREE delivery with Amazon Prime
Prime members enjoy FREE Delivery and exclusive access to movies, TV shows, music, Kindle e-books, Twitch Prime, and more.
> Get Started
Back to top
Get to Know Us
Make Money with Us
Let Us Help You
And don't forget:
© 1996-2020, Amazon.com, Inc. or its affiliates