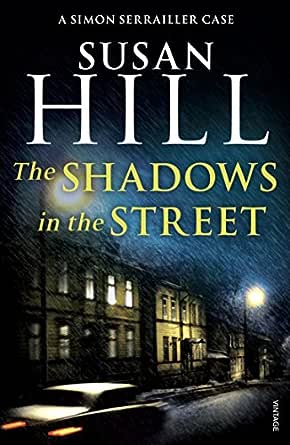 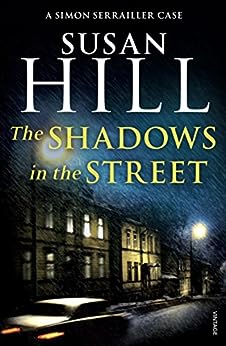 The Shadows in the Street: Simon Serrailler Book 5 Kindle Edition

'A crime tale with an emotional core.' -- The Herald

'A crime series that specialises in sidestepping conventions, always to exhilarating effect. These books succeed in harnessing all the genre's addictive power while maintaining a complexity and fascination entirely their own.' -- The Independent

'Nothing's quite as it seems, except Hill's brilliantly compelling prose.' -- Daily Mirror

'Susan Hill's Serrailler novels, with their persuasively-drawn copper and his equally well-rounded family, are real treats.' -- The Daily Express

'Susan Hill is extremely rare if not unique in having achieved enormous literary success in two genres, that of so-called straight novels and crime fiction ... Deeply engrossing and enjoyable.' -- The Lady --This text refers to the audioCD edition.

Susan Hill is a prize-winning novelist, having been awarded the Whitbread, Somerset Maugham and John Llewelyn Rhys awards, as well as having been shortlisted for the Booker Prize. She wrote Mrs de Winter, the bestselling sequel to Rebecca, and the ghost story The Woman in Black, which was adapted for the stage and became a great success in the West End. Her books include a collection of exquisite short stories, The Boy Who Taught the Beekeeper to Read, and the highly successful crime novel series about the detective Simon Serrailler. Susan Hill lives in Gloucestershire, where she runs her own small publishing firm, Long Barn Books.

Steven Pacey is an English actor and voice artist, best known for his role as Del Tarrant in the third and fourth seasons of the sci-fi series Blake's 7. Other notable television appearances include Heartbeat, Lovejoy, M.I.T.: Murder Investigation Team, Murder in Mind, Pie in the Sky and Spooks. Pacey was nominated for an Olivier Award for the role of Bertie Wooster in the musical By Jeeves. He has narrated countless audiobooks, which he likes to do whenever he has a free moment. Steven Pacey is a stage, musical theatre, television and radio actor. He first starred on stage at the age of eleven, and has recorded over 300 radio plays!

Audible is a seller and producer of spoken audio entertainment, information, and educational programming on the Internet. --This text refers to the audioCD edition.

Simon Serrailler is faced with the possibility of not one, but two murderers at large in the fifth installment of Susan Hill's bestselling series. --This text refers to the audioCD edition.

'A crime tale with an emotional core.' (The Herald)

'A crime series that specialises in sidestepping conventions, always to exhilarating effect. These books succeed in harnessing all the genre's addictive power while maintaining a complexity and fascination entirely their own.' (The Independent)

'Nothing's quite as it seems, except Hill's brilliantly compelling prose.' (Daily Mirror)

'Susan Hill's Serrailler novels, with their persuasively-drawn copper and his equally well-rounded family, are real treats.' (The Daily Express)

'Susan Hill is extremely rare if not unique in having achieved enormous literary success in two genres, that of so-called straight novels and crime fiction ... Deeply engrossing and enjoyable.' (The Lady) --This text refers to an alternate kindle_edition edition.
Read more

4.5 out of 5 stars
4.5 out of 5
328 global ratings
How are ratings calculated?
To calculate the overall star rating and percentage breakdown by star, we don’t use a simple average. Instead, our system considers things like how recent a review is and if the reviewer bought the item on Amazon. It also analyses reviews to verify trustworthiness.

Amazon Customer
3.0 out of 5 stars Three Stars
Reviewed in Australia on 5 November 2014
Verified Purchase
Great series, but the later ones are getting a bit too complex and leaving some threads unresolved.
Read more
Helpful
Comment Report abuse
See all reviews

Jennifer Jane
3.0 out of 5 stars Simon Serailler 5
Reviewed in the United Kingdom on 24 April 2020
Verified Purchase
I felt emotionally exhausted between after the last book in this series... it was so depressing. I'd already got this but it has taken my a while to work up to reading it.... but actually this book is quite a change in direction. The other books in this series have had a heavy focus on the Serrailler/Deerbon families where as in this book we get back to crime as yet another serial killer is on the loose in Bevham. Initially, prostitutes start going missing, but then other female members of the public - right under the noses of police. As always, you get the sense from the start that we know the killer - they are in the story somewhere.... but I didn't see this one coming.

I'm still not sure why these books are Simon Serailler series as he doesn't really feature that heavily. Anyway, this follows a similar format to the other books in the series but unlike the other books, no major characters die which is a welcome relief!!

I quite enjoyed this book - it's got a good pace with some interesting new characters.... but I still dont think I've recovered from all of the horror in the last book to feel truly happy reading this.
Read more
Report abuse

ChrisT
4.0 out of 5 stars first class detective series
Reviewed in the United Kingdom on 12 August 2020
Verified Purchase
I had previously only known Susan Hill for her famous 'Woman in Black' but once I had read The Various Haunts of Men I was totally hooked on her Simon Serrailler detective series. You could in theory read any one of the books on its own but there is so much social and family background that you would be losing out as Simon's relations with his sister Cat, her children, his father Richard and stepmother Judith are central to each story. There is even his mysterious brother Ivo , a flying doctor in the Australian Outback, I wonder if he will ever actually feature in a story? The series is set in the fictional small English cathedral city of Lafferton which seems to have an uncharacteristically high murder rate - I live just outside a similar town , Canterbury, and it just doesn't happen! Well ok this IS crime fiction.
Read more
Report abuse

M. Richardson
5.0 out of 5 stars Much more than a detective novel.!
Reviewed in the United Kingdom on 15 May 2019
Verified Purchase
Having read all of the Susan Hill Simon Serrailler novels, I started to read them again in order. I don't usually reread detective or thriller novels but Susan Hills are the exception. Shadows in the Street is riveting, shocking and amazing. The story is dense, side stories, unexpected turns and huge suspense. Even though this was the second time l have read this but it was just as scary, shocking and amazing. Susan Hill writes about real human beings, good and bad, over a huge canvas and I enjoyed this so much more than the first time. She writes highly readable books filled with so much detail. Highly recommended. Each book can stand alone but read the series to get the full effect....just seen that there will be a new one in the autumn!!
Read more
One person found this helpful
Report abuse

Sandradan1
4.0 out of 5 stars Nothing is as it first seems
Reviewed in the United Kingdom on 9 April 2015
Verified Purchase
After a spell of reading historical books, I needed a comfort read, something familiar. A pageturner, but well-written. So I picked up this, the fifth in the Simon Serrailler detective series by Susan Hill. And I tweeted about it. Susan Hill replied with the question: “Comfort?!!”
I know what she means; a crime thriller should not be comfortable reading. I replied: “Okay, discomfort with familiar characters”.
I finished the book that same day, but sat back and considered what made me feel comfortable with this series of books. Firstly, the quality of the writing. Hill’s detective Serrailler is a literary gem, he is distinctive but believable, seems ordinary but is extraordinary. And he is surrounded by a close-knit family whose stories I also follow from book to book. Hill is particularly good at creating mood – a skill also used in her ghost stories – and her description of place is minimal but so effective. For example, “It was a damp, mild October night with a thin mist drifting away over the black water of the canal like a spirit departing a dead body. The air smelled green.” And there is depth to her writing, literary and cultural references there for you to delight in recognising but which don’t matter if you don’t get them.
In Lafferton, two prostitutes are murdered. Simon Serrailler is on sabbatical leave on a remote Scottish island. A librarian takes food parcels to the prostitutes, one of whom is beaten up by her boyfriend. As usual with Hill’s books, each new chapter makes you want to devour the book in one sitting as she lays out first one possibility then another. Of course nothing is as it first seems.
This is the fifth of the Simon Serrailler books.
Read more
2 people found this helpful
Report abuse

Alison
4.0 out of 5 stars Absorbing Series
Reviewed in the United Kingdom on 9 March 2020
Verified Purchase
Am really enjoying this series. In this one, I guessed the killer (but was not 100% sure why other characters in the book did as I don't think this was explained?). I was disappointed not to get an update on the surviving prostitutes at the end though. I was more interested in them than most of the other characters.
Read more
One person found this helpful
Report abuse
See all reviews
Get FREE delivery with Amazon Prime
Prime members enjoy FREE Delivery and exclusive access to movies, TV shows, music, Kindle e-books, Twitch Prime, and more.
> Get Started
Back to top
Get to Know Us
Make Money with Us
Let Us Help You
And don't forget:
© 1996-2020, Amazon.com, Inc. or its affiliates