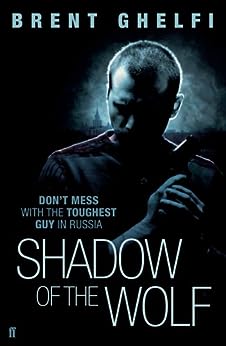 Shadow of the Wolf Kindle Edition

"Ghelfi [is] a master at painting a modern Russia so dark and scary that it would give Stalin pause...Quite thrilling."

"Volk is less Arkady Renko than a Russian Jack Reacher, making Volk's Shadow as noir as a winter night in Saint Petersburg."

Ghelfi [is] a master at painting a modern Russia so dark and scary that it would give Stalin pause.... Quite thrilling.-- "Kirkus" --This text refers to the audioCD edition.

Brent Ghelfi has served as a clerk on the U.S. Court of Appeals, been a partner in a Phoenix-headquartered law firm, and now owns and operates several businesses. His novels have been translated into seven languages and optioned for film. He has traveled extensively throughout Russia and now lives in Phoenix with his wife, a former prosecutor, and their two sons.

Stephen Hoye has worked as a professional actor in London and Los Angeles for more than thirty years. Trained at Boston University and the Guildhall in London, he has acted in television series and six feature films and has appeared in London's West End. His audiobook narration has won him fifteen AudioFile Earphones Awards.

Lithostone
5.0 out of 5 stars Volk is back
Reviewed in the United Kingdom on 15 June 2010
Verified Purchase
A great follow on to Volk's Game. This is Russia's James Bond, the stories are hard and fast moving, pity that Valya is hurt.
Read more
Report abuse

Wayne C. Rogers
5.0 out of 5 stars Even better than the first novel!
Reviewed in the United States on 17 November 2008
Verified Purchase
Volk's Shadow by Brent Ghelfi continues where the first novel in the series, Volk's Game, left off. Colonel Alexei Volkovoy (a.k.a. Volk) is still recovering emotionally from the betrayal of General Nemstov, the man he sees as a father figure, and the departure of the woman he loves, Vayla. Volk, however, has other worries as he attempts to prevent the destruction a building owned by an American oil company and the death of the company's stop employees by Chechen terrorists. This quickly leads our Russian anti-hero on a search for the man (Abreg) who once held him prisoner in a Chechen camp for six months and tortured him, and who's now killing Russian soldiers who participated in the massacre of civilians at Starye Atag. Also, in the middle of this is the search for the priceless Faberge eggs, a missing twelve-year-old girl who's been taken by a sick predator, the creation of a new oil broker (Maxim) and his quest to control Russia's precious oil reserves, the search for a missing American Senator's daughter, and the death of the Chechen terrorist leaders. Volk is definitely going to have his hands full with juggling several important objectives, but never fear, Valya returns to help him and to watch his back.

The author, Brent Ghelfi, does an excellent job of juggling (like Volk) several sub-plots and then successfully tying everything together by the end of the novel. He manages to keep the tension ratcheted up to a fever pitch with the action coming at the appropriate intervals so that the reader never has time to be bored. The bad guys are every bit as colorful and wicked as the ones in the last novel--Filip Lachek, the man who seeks revenge against Volk for killing his son and plans to slowly torture him to death, Abreg, the Chechen terrorist, who's the only man alive that Volk has ever been scared of, and Constantine, the mysterious person of power behind the Russian leaders, who has the power to destroy Volk with a simple snap of his fingers.

Fast paced and utterly suspenseful, Volk's Shadow carries us to the next level with a closer look at Alexei Volkovoy and his dark, violent past, the Russian Mafia, the politicians who will stop at nothing to gain power over a struggling country and its vital resources, and the terrorists who seek revenge against those who tortured and killed their wives and children so many years ago. Volk's Shadow isn't for everyone. It's filled with violence and torture and betrayal, yet the story also shows the kindness and hope that can prevail in even the worst of us. With just two books to his name, Brent Ghelfi is quickly establishing himself as the author to go to, if you're a reader who desires something different from the normal brand of fiction and that's more in your face with its gritty realism. Highly recommended!
Read more
Report abuse

Gary Griffiths
4.0 out of 5 stars "Try to Keep Your Dinner Down"
Reviewed in the United States on 6 November 2008
Verified Purchase
While "noir" in film or literature is usually associated with crime fiction, were there a "noir" thriller category, what better place than Russia, with her grim and vainglorious history, to set the story? And with the exception of Martin Cruz Smith, who better to tell the noir thriller tale than Brent Ghelfi and his viciously intimidating anti-hero, Russian war veteran Colonel Alexei Volkovoy, the leanest, meanest, most hardboiled, hard-bitten action hero to jump from the pages since the days before Jack Reacher started condoning deserters.

"Volk's Shadow" is Ghelfi's second novel, and Volk's second adventure. This time around, when an America oil company's Moscow office is allegedly blown up by Chechen terrorists, Volk finds himself in the center of the inferno, emerging from the fracas lightly charred and heavily annoyed. Marginally estranged girlfriend Valya, the gun-toting Valkyrie demon of a woman - and possibly the only person on the planet more deadly than Volk - is back in her native Chechnya mopping up some loose ends from the first novel. Meanwhile, the surreal and mystical General who pulls Volk's strings from his tomb-like office in the bowels of the Kremlin like a scene out of a Kafka novel is sending Volk on a quest for one of the priceless Faberge eggs. The egg, which turned up after years of unknown whereabouts, disappears in transit leaving only the couriers' savagely butchered bodies behind. And if all that is not enough, a twelve-year old girl has gone missing, feared to be in the clutches of a sadistic child murderer, a DVD of Russian war atrocities is rumored to be on the loose, and Volk's old nemesis, the shadowy Chechen rebel Abreg, is making more mischief. Volk moves jumps more cliffhangers than Indiana Jones and totes more hardware than the average infantry platoon - but it's just another day in the trenches for this deeply unconventional Russian undercover agent-of-sorts.

Sound convoluted? You bet it is, but entertainingly so - as long as you don't mind some blood - lots of blood - depravity, and unthinkable violence with your, um, "entertainment." But Ghelfi, an undisputed master of action, is a talented and intelligent author. Ghelfi's Russia is one of nightmarish cityscapes of broken bottles and bloody syringes and wet fast food wrappers. He colors his mayhem and ambiguous issues with a rich atmosphere of "stale cigarettes, mold, and men too long between showers". In other words, this isn't "Mamma Mia". But if you're looking for some escapist pop fiction, want some cynical insight to modern Russia and the Chechnya conflict, and tire of the bland and predictable boredom of most best selling "thrillers", give Ghelfi a try. But fair warning: you may want to start on an empty stomach.
Read more
2 people found this helpful
Report abuse

Evan Haglund
5.0 out of 5 stars The New Face of the International Thriller
Reviewed in the United States on 10 October 2010
Verified Purchase
Brent Ghelfi and his protagonist/antihero, Col. Alexei Volkovoy, must be considered the new faces in terms of writer & character, respectively, in the post-Soviet world. With the lines between good and evil unquestionably blurred in our current world, no single character single-handedly captures this era of moral uncertainty than the perpetually conflict Col. Volkovoy. While Volk's Game is a must-read to fully appreciate Volk's Shadow, Volk's Shadow demonstrates Ghelfi's maturity as a writer, with even tighter writing and excellent development of his characters. Ironically, while Ghelfi's books are clearly well researched and reflect an unparalleled glimpse of modern Russian politics by an English fiction writer, Ghelfi's work can also be seen as allegorical to the current evolution of American politics as well. A fun, yet thought provoking read, while I highly recommend.
Read more
Report abuse

Ursa Major
1.0 out of 5 stars Yo-Yo Pricing -- What Kind Of Economic Experiment?
Reviewed in the United States on 6 October 2009
Verified Purchase
Jumps back and forth in price between 13+ and 14+ regularly for around a year. This is higher than the just-issued 3rd book in the series. How about trying something like 9.99?
Read more
Report abuse
See all reviews
Back to top
Get to Know Us
Make Money with Us
Let Us Help You
And don't forget:
© 1996-2021, Amazon.com, Inc. or its affiliates