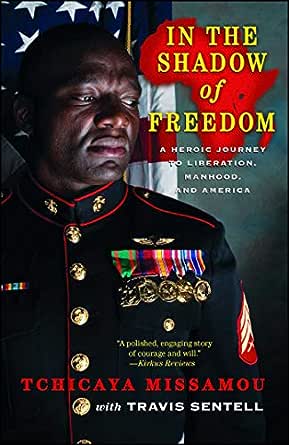 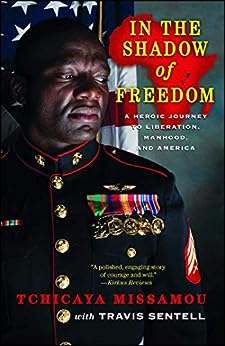 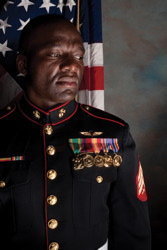 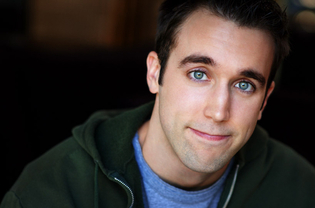 In the Shadow of Freedom: A Heroic Journey to Liberation, Manhood, and America Kindle Edition

A compelling story of ordeal and courage. Tchicaya beautifully shares his struggles as a militia during Congo's civil war, his daring escape to Europe and America, and his bravery as a United States marine serving in Iraq. --Joseph Sebarenzi, author of God Sleeps in Rwanda: A Journey of Transformation


Sgt. Missamou's journey from child soldier in central Africa to United States Marine to American entrepreneur reads like a thriller, but there are powerful lessons in his story. With great love for his family, friends, and his adopted homeland, his life is testimony that what violence destroys, people of courage can rebuild. --Charles London, author of One Day the Soldiers Came

The patriotic message about America, "my true home," is hardearned and heartfelt. --Booklist

This book reads like an epic poem. Briskly paced, each image and experience sharply crafted, In the Shadow of Freedom relates the story of a heroic journey that is both timeless and contemporary. Tchicaya Missamou should be commended not only for his outstanding service as a U.S. Marine, but for his extraordinary gifts as a masterful storyteller. -- Andrew Carroll, editor of bestsellers War Letters and Behind the Lines

"A polished, engaging story of courage and will." -Kirkus Reviews

''A true story as riveting as any thriller, In the Shadow of Freedom kept me on the couch all day Sunday. From his bravery as a child soldier in the Congo, to his courage serving our country, Tchicaya Missamou is the new American hero. You'll never forget his inspiring life.'' -- Judy A. Bernstein, Co-Author of They Poured Fire On Us From the Sky: The True Story of Three Lost Boys of Sudan --This text refers to the paperback edition.

Tchicaya Missamou was born and raised in Brazzaville, Congo. He is pursuing a Ph.D. in education and is the proud owner of The Warrior Fitness Camp, Inc., a high-end personal training facility. He lives in Santa Clarita, California, with his wife, Ana, and three children, Marie Vagansi, Yana Simbasi, and Allan Kelvin Tamsi, The Legend. Visit www.thewarriorfitness.com.

Travis Sentell was born in New Orleans, Louisiana and currently resides in Los Angeles, California, where he works as a screenwriter, essayist, novelist, actor and playwright. --This text refers to the paperback edition.

5.0 out of 5 stars
5 out of 5
34 global ratings
How are ratings calculated?
To calculate the overall star rating and percentage breakdown by star, we don’t use a simple average. Instead, our system considers things like how recent a review is and if the reviewer bought the item on Amazon. It also analyses reviews to verify trustworthiness.

Tractor Annie
5.0 out of 5 stars Congo Fiction-History Story
Reviewed in the United States on 4 October 2018
Verified Purchase
I love books based on historical facts, so there was so much to learn about the principle character. He went from tribal beginnings, cultural in-fighting Congo's being torn in 3 parts by the three european countries that settled and claimed the land, riches and people. This resulted in the the whole country torn into political ruling classes. He learned, survived and served in the US Marines. Years later, he managed to obtain passage back to the Congo to visit his mother, and family. It will keep you spell bound reading this story. Loved it.
Read more
Report abuse

RCMP
5.0 out of 5 stars SHOULD BE ON EVERY HS READING LIST
Reviewed in the United States on 3 October 2014
Verified Purchase
THIS SHOULD BE ON THE REQUIRED READING LIST FOR ALL AMERICAN HS STUDENTS. It shows what having a goal and never turning away from it regardless of the difficulty can accomplish.....AND here the obstacles would deter 98% of what our HS students represent...a good counter balance for the negative attitude that some teachers show regarding the US they are born in and live in..[usually comfortable and safe]......gives a true accurate picture of the tribal warfare tearing East Africa apart.,,,,also a good enlistment call for the marines who really bond together & never forget they are a marine.
RCMP
Read more
One person found this helpful
Report abuse

MMS
5.0 out of 5 stars extraordinary story told by an extraordinary man
Reviewed in the United States on 23 September 2013
Verified Purchase
this story is spell binding. it's true, it's real, it's horrific and joyous. I could not put it down and read it almost in one or two sittings. of course, I am biased, as I know the man and heard him tell the basic story before. so, I was so glad to see he finally got it published into a book.

Tchicaya himself is bigger than life but he still retains such genuineness and humbleness.

I highly recommend reading this story. it will make you shudder and cry and most importantly, realize how good we have it here in America - a fact that too many of us take for granted.
Read more
One person found this helpful
Report abuse

Sanford
5.0 out of 5 stars Going back home is not what it used to be
Reviewed in the United States on 19 November 2018
Verified Purchase
What a story!! A young boy grows up and get to America to live the dream. He wants to be an American and is willing to fight for his newfound country, then decides to go back home to visit with his family. That's when things go dark. Now, go read it!
Read more
Report abuse
See all reviews
Get FREE delivery with Amazon Prime
Prime members enjoy FREE Delivery and exclusive access to movies, TV shows, music, Kindle e-books, Twitch Prime, and more.
> Get Started
Back to top
Get to Know Us
Make Money with Us
Let Us Help You
And don't forget:
© 1996-2020, Amazon.com, Inc. or its affiliates