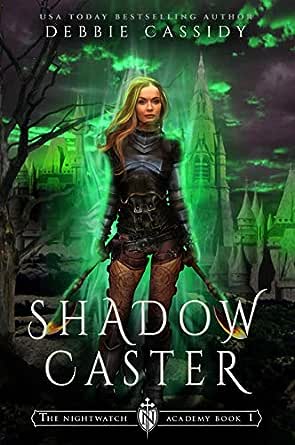 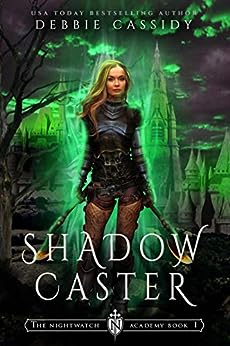 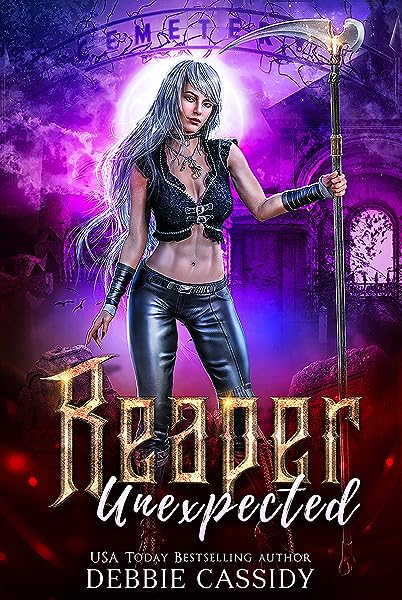 soph
4.0 out of 5 stars read this book immediately
Reviewed in Australia on 19 September 2019
Verified Purchase
So I devoured this book in 1 day basically 1 sitting, this is the latest book from my beloved Debbie Cassidy who in terms of RH can literally do no wrong.
This latest academy RH is set around our MC indigo justice who is a night blood (born vampire) and is tricked by her father into going to the night watch academy.

Slow burn 🔥✔️ but it still has SIZZLE. Which kept me dreaming about men in uniforms
Different supes ✔️ some variety
Lack of bullying ✔️✔️✔️ which is honestly so so very refreshing, it initially could have been the 2D bitchy girl situation but then that resolves even though there is tension to maintain plot the bullying aspect is resolved for the most part

The MC is 19 and I have read reviews that say she acts above her age but I didn’t find that, she wasn’t wingy but she was a teenager. She had attitude which at times I found annoying and immature but that suddenly changes and she seems to come to her senses , which is really cool to see
Over all I did really enjoy this book but that why I gave it 4 stars instead of 5 because of that and because there wasnt any other POV's. I’ll be eager to read the next, thank goodness I don’t have to wait long. Thank you Debbie for yet again another series to add to my ever growing favourites and re reads.

This week I read the first book in the Nightwatcher Academy series for the second time and thought the book was as fantastic as the first time that I read it.
This book, along with the subsequent books in the series are stories that you will find yourself happily reading again and again.
For me, the characters are ones that I’ll want to visit again and again.
I love the world building, the characters and unforgettable storyline of this series and would ecstatically read any books set in this world again and again.
A Great, Addictive Read from one of my new favourite authors.
Read more
Helpful
Report abuse

Dallass
TOP 100 REVIEWER
3.0 out of 5 stars An interesting premise.
Reviewed in Australia on 7 March 2020
I enjoyed this. It was relatively fast paced and had some good action scenes. I liked Indigo for the most part. Her family life was crap, and her father punishes her for not being the son he wanted. This leads to a whole lot of anguish and emotional turmoil for a character that reads like she should be in her early 20s (when she’s actually not). The characters she finds herself surrounded by at the academy waver between friends and borderline enemies, but once the shadow cadet plot kicks in it settles down.

Am going to move on to book 2 to see what happens next. Was hoping that Hyde wasn’t going to be a jerk, but unfortunately he pulled the douche card... well, as much as you can be in a YA book.

Rosa
5.0 out of 5 stars And the plot thickens
Reviewed in Australia on 29 October 2019
Love the intrigue and back stabbing, seeing who is turning into a bad guy and who isn’t, very deep in its storyline which is by no means complete, I can see this twisting and changing every book. The MC is a strong person given to making mistakes which makes her all the more Human, given she is a nightblood, trying to work out who is going to end up in her ‘group’ is a puzzle in itself with some showing promise and some saying no and there being others who could end up just being smoke. Looking forward to following this series.
Read more
Helpful
Report abuse

Annie Berne
4.0 out of 5 stars Shadow Caster - great start, I just want more!
Reviewed in Australia on 10 September 2019
This book is a great addition to the universe that Debbie is creating, it really fits in with the Chronicles of Arcana and Chronicles of Midnight world.
I loved the characters, their interaction, and the unexpected storylines. I really hope we get some mm ;)

As per usual, I really really really wish that the book was longer. I wanted to spend even more time in the academy and that’s the only reason why I’m giving it 4/5.
Read more
Helpful
Report abuse

A. J. Bergman
TOP 1000 REVIEWER
5.0 out of 5 stars Brilliant plot
Reviewed in Australia on 11 September 2019
As with all her other series, I’m a huge fan. The plot twist in this one is pure genius. The tension between her and Archer is excruciating, and I don’t know if she will get to keep him or not. I look forward to the rest of the cadets becoming more rounded in the later books. This is a real page turner academy RH
Read more
Helpful
Report abuse

Jessica
3.0 out of 5 stars It was okay.
Reviewed in Australia on 23 December 2019
I wish I hadn’t read all of the glowing reviews here and on the US site because I found this book to be a bit of a let down. I also didn’t really find the MC to be that bad ass or strong to be honest. She was slightly irritating at quite a few points and came across a little too cocksure and confident at others.
Storyline is interesting and I like the originality, but I sure hope the MC evolves to be more compelling.
Read more
Helpful
Report abuse

WiccaMagic74
5.0 out of 5 stars A great read
Reviewed in Australia on 4 October 2019
This is a wonderful surprise in the way supernaturals are explained and the author manages to capture the imagination easily.
I can’t wait for book 2
Read more
Helpful
Report abuse
See all reviews

T
3.0 out of 5 stars 3.5 stars
Reviewed in the United Kingdom on 8 January 2020
Verified Purchase
enjoyed it .. def buying the next book.. enjoyed the character interactions... having some difficulty falling for the MC's guy.. even though there was a great a deal of description of how the MC was feeling.. somehow it didnt make me feel the same emotions as other authors have.. i duno maybe im reading too much into... its almost as if im being told told this is what the MC feels and provides the interactions but somehow i dont feel immersed in it as with other authors books.. hopefully will be better in the next book.. enjoyed the storyline , was interesting UPDATE: read the second boook.. it had everything that i felt was missing from this book... im glad i continued reading... I could feel the emotion and connection from the MC's. onto book 3 now!
Read more
One person found this helpful
Report abuse

Kindle Customer
5.0 out of 5 stars Very Good
Reviewed in the United States on 22 November 2019
Verified Purchase
I really got sucked into this. Indigo starts off a loner with only Minnie for a friend, but comes to care for more people. Getting close to others makes her more emotional at times, but she's still a badass and isn't a whiner. So far, I'm liking the side characters as well as her potential harem members. Aside from Archer and Brady, I'm not sure who all of them will be, but I'm rooting for Lloyd, Devon and Aiden. I hope she becomes closer friends with Thomas and Harmon as well.

I'm really hoping that Minnie and Little can be helped and I'm pissed at Harper over how she chose to handle that situation. I'm also looking forward to finding out why it is that Indigo can shadow phase as well as finding out what is truly going on with the fomorians and fir bolg.
Read more
One person found this helpful
Report abuse

Stephanie R
5.0 out of 5 stars Absolutely LOVED IT!
Reviewed in the United States on 13 September 2019
Verified Purchase
Oooh I so love Academy books! The Nightwatch Academy is a new favorite! I love this new world that Debbie has built. Her writing ability never fails to astound me. She always makes the characters and worlds feel so real and have such depth!
Indigo has become my new favorite female lead! She’s had a hard rough life and it’s been extremely lonely. Seeing her make friends and get close to people was a definite favorite part for me!
I’m so excited to see where her relationships with some of the guys goes and who she ends up keeping! This was an interesting and great read I def recommend!
Read more
One person found this helpful
Report abuse

Kindle Customer
3.0 out of 5 stars Captivating story
Reviewed in the United States on 23 June 2020
Verified Purchase
This author has a way with words and a kick ass MC who doesn't take no for an answer. She demands respect because she earnt it. In a man's world that is something special. Lot of unanswered questions, secrets about just what powers Justice has and where did they come from. Every time Larkin speaks I am thinking back to the Cheshire cat from Alice in Wonderland. Plenty of action and intrigue and there is more to this mist than what the cadets are being told. I cannot wait to find out.
Read more
One person found this helpful
Report abuse

Trinitysrain
5.0 out of 5 stars Loved this new series!
Reviewed in the United States on 5 October 2019
Verified Purchase
I was a bit wary at first since it seems like the trend now are academy type books. Once I started however, I could not stop reading and finished in one setting. I found Indigo to be a refreshing heroine who is strong and self assured even though her life has been manipulated by outside forces. I found the relationships with her fellow cadets to be intriguing in their development. I especially liked the character of Brady and can’t wait for his backstory. Archer was also interesting although irritating at times and I hope there will be some change in the next book.
I’m hooked. I can’t wait for the next book.
Read more
Report abuse
See all reviews
Get FREE delivery with Amazon Prime
Prime members enjoy FREE Delivery and exclusive access to movies, TV shows, music, Kindle e-books, Twitch Prime, and more.
> Get Started
Back to top
Get to Know Us
Make Money with Us
Let Us Help You
And don't forget:
© 1996-2020, Amazon.com, Inc. or its affiliates