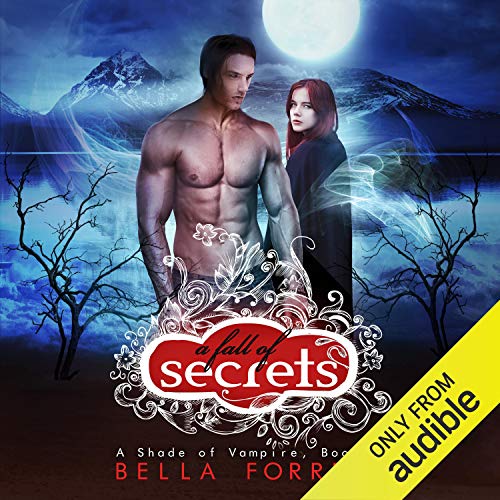 A Shade of Vampire 15: A Fall of Secrets

4.8 out of 5 stars
4.8 out of 5
662 global ratings
How are ratings calculated?
To calculate the overall star rating and percentage breakdown by star, we don’t use a simple average. Instead, our system considers things like how recent a review is and if the reviewer bought the item on Amazon. It also analyses reviews to verify trustworthiness.

Maria Leef
5.0 out of 5 stars Five Stars
Reviewed in Australia on 7 June 2018
Verified Purchase
Love the whole series of books. Great transition from one series to the other.
Highly recommend
Read more
Helpful
Report abuse

ken hales
5.0 out of 5 stars Five Stars
Reviewed in Australia on 17 November 2015
Verified Purchase
I love all of these books, always can't wait for the next.
Read more
Helpful
Report abuse

jessica
4.0 out of 5 stars Ok
Reviewed in the United Kingdom on 2 March 2021
Verified Purchase
I bought pretty much the entire series. The books are okay, light enough to read without having to think much. Overall the storyline is very predictable and uninspiring. I found myself skipping through parts that were a little boring. Overall an alright series if you don't have any expectations, personally wouldn't read these again however.
Read more
Report abuse

Dizas books.
5.0 out of 5 stars Omg bella I'm left hanging ;)
Reviewed in the United Kingdom on 6 July 2015
Verified Purchase
Another fantastic part to the shade , this was by far my fave book between Rose and Caleb .

Again another maxing addition to the story of the shade , I didn't stop reading until it was over and now I'm having major withdrawl symptoms ;(

I can't wait for the next part already pre ordered !!

Anyone wondering if they should buy this book I would say absolutely but you have to read from the beginning or atleast the start of Rose and Calebs story from book 8 !!

You will not be disappointed I am so please we are finally getting some closure on Lilith I don't like her character and can't wait for the end of her !!

Just got to try and get through this month now , the 30th of July can't come any faster :)
Read more
One person found this helpful
Report abuse

The Average Customer
5.0 out of 5 stars As usual, just amazing !
Reviewed in the United Kingdom on 21 July 2015
Verified Purchase
Yet again I was hit with another fantastic book by Bella Forrest. It amazes me how she writes such great books every time.

This book was well paced and the characters, as usual were amazing. My only wish is that there is more of Ben in the next book as I haven't seen too much of him in recent books. Hopefully he'll be in the next.

Gillian Steer
5.0 out of 5 stars A SHADE OF VAMPIRE NO 15
Reviewed in the United Kingdom on 12 April 2017
Verified Purchase
GOOD BOOK, BUT YOU HAVE TO READ THE BOOKS IN SEQUENCE FROM 9 - 16. T0 FOLLOW THE WHOLE STORYLINE. EACH BLOCK OF BOOKS IS BASED ON ONE OR MORE OF THE MAIN CHARACTERS. THE TOTAL SERIES CONSISTS OF 42 PAPERBACKS.IN 6 BLOCKS OF ABOUT 8 BOOKS IN EACH BLOCK..
Read more
One person found this helpful
Report abuse
See all reviews
Back to top
Get to Know Us
Make Money with Us
Let Us Help You
And don't forget:
© 1996-2021, Amazon.com, Inc. or its affiliates