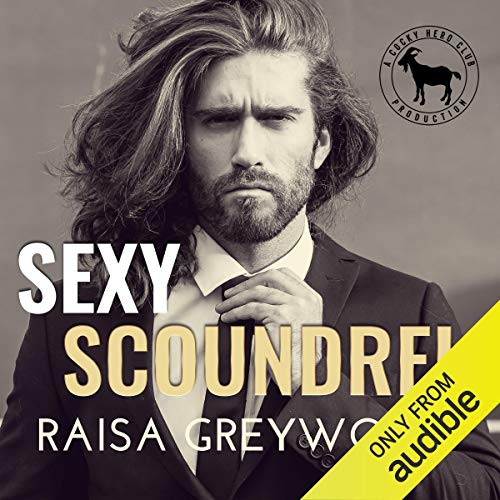 Sexy Scoundrel by Raisa Greywood is a new standalone romance by a new to me author that is a part of the Cocky Hero Club collection. This book is a contemporary romance that is told in a dual point of view and follows cocky, suave billionaire Giorgio and down on her luck, animal lover Carli. Sexy Scoundrel had me reeled in from the start and had everything from chemistry, drama, slow burn and sweet endearing secondary characters to a great well-developed plot and storyline. I finished this book in a matter of hours and I adored how the characters grew and came into themselves throughout the book. Overall, I loved this book and would recommend this to any romance fan, and I can’t wait to read more from this author.

Codie Riddell
TOP 1000 REVIEWER
5.0 out of 5 stars Pure joy
Reviewed in Australia on 17 May 2020
I feel like I'm in a book hangover after finishing this book. Sexy Scoundrel is the first book from Raisa I've read and I loved every moment of it. I curled up under a warm blanket and devoured every word. Carlina and Hip, their chemistry is unmistakable, this book is built on social expectations, unpredictability, lust, love, fate, family and a lion. Those elements created this brilliant story, the plot was witty, sassy and often sweet. Highly addicting, all you could want from this club.
Read more
Helpful
Report abuse

Trueblueocca
5.0 out of 5 stars I loved this story
Reviewed in Australia on 25 January 2021
First, your lucky. I'm a silent voter! I rate stars but never write, until now. I love all kinds of romance, fantasy etc, but after a while, most of the romance stories sound the same. Not this one! It was different than the others and I enjoyed it so much. If I had one thing to say, was that there wasn't a reason why his aunt was horrible and did those nasty things. I'm assuming it was too keep the money in the family. Thank you for a great read.
Read more
Helpful
Report abuse

Sarah P
TOP 1000 REVIEWER
4.0 out of 5 stars Good read
Reviewed in Australia on 17 May 2020
This is a first read for me by this author and i enjoyed this story.
Read more
Helpful
Report abuse
See all reviews

Mary-Louise
3.0 out of 5 stars Took a wrong turn
Reviewed in Brazil on 15 May 2021
Verified Purchase
The story was doing very well, good characters and development but then came the whole Sara drama and everything went down. That took the focus off the couple and I hated it. That is why 3 stars. I feel like the author lost herself in the storyline, and the end was not so nice. You can’t have an ideal story in real life because life is flawed but books, they can and should be ideal, so that is why I didn't enjoyed so much the book.
Read more
Report abuse

LESLIE OBRIEN
5.0 out of 5 stars Rowr....
Reviewed in the United States on 19 May 2020
Verified Purchase
I’ve been looking forward to this book when it was first announced and I will say that Raisa Greywood did not disappoint. This was such a fun read that I’m not sure where to begin. If you read her other contemporary billionaire romance, then I’ll stop right here and say, buy this book. It’s great! If you haven’t read it or on the fence, then let me go on. Ms. Greywood has this amazing knack to take a common book trope and flip it upside down. Sure, we have Giorgio, billionaire extraordinaire who has a knack for gracing the tabloids. And we have a recently fired chef who is all sorts of girl-next-door attractive with a mouth that would make a sailor blush. Perfect recipe for a relationship, right? Not according to Carlina.

So, likes/loves: Most of the time, billionaire stories tend to feature a woman in need (generically speaking) and it’s often financial. While yes, Carlina was fired from her job, she was adamant that she didn’t want anything to do with Giorgio and her animosity toward him was pure delight. I loved her threats of bodily harm. Add in that Antonio was a wonderful bonding agent (glue, I mean, glue) between the two and Ms. Greywood did a fantastic job developing both Gio and Carli through Antonio. And it wouldn’t be a great novel without some fab secondary characters and an elderly lion to really mix things up. And I’d be remiss if I didn’t mention the food porn; at least if the moans and groans and blissful expressions on the characters’ faces are anything to say for it. Let’s add in some of the cultural references, which were endearing and had me making a list to see what I want to rewatch. And of course, there’s the amazing attraction between the two to round out the story.

There’s some great laugh out loud lines in the story that I couldn’t help highlighting as I read. To share, without revealing any spoilers: “I was going to die. The paramedics were going to find me tied to the bed with my a$$ up in the air and a stupid cheesy grin on my face. It would stick there with rigor and the funeral home would have to close my casket because everyone would f****** know I died having raunchy sex with a man I shouldn’t have. My mother would never be able to show her face in public again, and all my aunties would whisper behind lace mantillas about the man who could give a woman a smile like that. I’d be a cautionary tale for young girls at Quinceañera celebrations forever.”

Sexy Scoundrel by Raisa Greywood is A Cocky Hero Club Novel, which means there’s more to choose from by some great authors. Get moving and get clicking.
Read more
2 people found this helpful
Report abuse

Marcie (@thecliteraturecorner)
5.0 out of 5 stars A fantastic Cocky Hero Club addition that will make you purr with satisfaction
Reviewed in the United States on 9 June 2020
Verified Purchase
This is my first read by Raisa - I am so pleased and loved everything about this book. She weaved the perfect story with low drama (there are a couple of WTF moments thanks to a more than crazy aunt), fantastic banter, and a plot that was really entertaining. I went thru so many emotions while reading this and don't regret any of them. Seriously, where else are you going to read a romance that includes having a pet lion and make you want to open your own animal sanctuary?!
I loved the main characters, Giorgio and Carli, so much but found myself connecting with the side characters as well. I think I ended up loving Antonio a little more than the main characters because he had more growth than the main characters and I can't forget Hunter and Jeremy as well. I think that was my favorite thing about this story overall - Raisa had me loving everyone (except that one crazy aunt that I wanted to slap). The cherry on the cake was seeing Aubrey and Chance and getting the glimpse of Graham. In my opinion, Raisa has written a perfect romance filled with tons of love and emotion, added in just a soft touch of bdsm, and the characters were perfect (flaws and all). I'm happy I have added this to my kindle library because I can see myself reading it again in the future. This is definitely another Cocky Hero Club series addition that deserves more than 5 stars.
Read more
Report abuse

Kristiann R. Blevins
5.0 out of 5 stars A fantastic book!
Reviewed in the United States on 12 June 2020
Verified Purchase
Giorgio, Carlina and Antonio's story is fantastic! Giorgio has done his best for his brother Antonio who has DS. He owns his own company and hasn't had a long term relationship, just how he likes it.
Carlina is a chef extraordinaire, well she quit her job and now takes in exotic animals until a permanent home can be found. She needs a job and fast in order for her to keep her lane and feed the animals, not to mention eat herself.
Giorgio and Carlina have found a working arrangement that will work for them both. She will take Antonio during the day and he picks him up.
Is this going to work? Giorgio is so tempting but infuriating and she is sexy independent woman that can't be bought.
A must read, if you like a steamy, funny and dramatic story. You will not want the story to end.
Read more
Report abuse

Ashley A. Carr
5.0 out of 5 stars Giorgio and Carlina
Reviewed in the United States on 17 May 2020
Verified Purchase
I love this author’s writing and when she announced she was going to write a story in this collection I jumped on it!! I devoured this book in one sitting because it is heartwarming, sweet and heartbreaking at times. Giorgio is a witness to Carlina’s life falling apart and after he tastes her food he is determined to hire her as his personal chef. Giorgio is cocky, arrogant and a playboy but underneath the façade he is a really sweet guy just wanting to do right by his brother. Antonio, his brother is a beautiful soul. Can Carlina and Giorgio fight the attraction to each other?
Read more
Report abuse
See all reviews
Back to top
Get to Know Us
Make Money with Us
Let Us Help You
And don't forget:
© 1996-2021, Amazon.com, Inc. or its affiliates