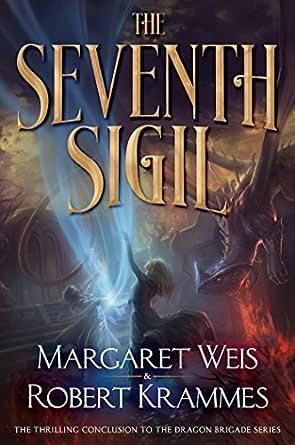 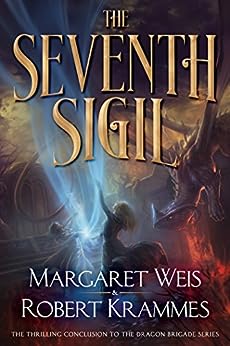 The Seventh Sigil: The Thrilling Conclusion to the Dragon Brigade Series Kindle Edition

"Veteran storyteller Weis and her cowriter continue the saga begun in Shadow Raiders with this tasty mix of epic fantasy and swashbuckling action that should please fans of dragon-based fiction." --"Library Journal""The novel is a great ride, offering shifting political alliances, thrilling battle sequences, angst-y romance and hairpin plot twists." --"Kirkus" (starred review)"A very solid piece of epic fantasy, with conspiracy and plotting as well as a great deal of action, "Storm Riders" carries on an entertaining story to a cliff-hanger that guarantees readers will want the next volume." --"Booklist"
Praise for "Rage of the Dragon"

"Certain to have a particularly strong appeal for lovers of fantastical seas stories, this book will also add luster to its authors' reputation as purveyors of classic quest tales." --"Booklist"

Margaret Weis and co-author Robert Krammes bring the enthralling Dragon Brigade trilogy to a thrilling conclusion in The Seven Sigil, a sweeping novel of worldwide war and personal redemption.

Five hundred years ago, a clan of rebels was banished to the bottom of the enchanted world of Aeronne; ever since, these Bottom Dwellers have sought revenge, and now they are waging all-out war on the rest of humanity. Their deadly "contramagic" beams destroy buildings and attack naval airships, and their demonic drumming brings terrible storms and disrupts the magic of the people and dragons Above. The attack of their full contramagic power will create a magical armageddon.

In an effort to prevent further death, Captain Stephano de Guichen leads the Dragon Brigade, taking the fight to the Bottom. But strength of arms alone will not be enough to conquer their foe.
As the Bottom Dwellers' blood magic eats away at the world, those Above realize their only possible defense lies in the heretical secrets of contramagic. Loyal priests must decide whether to protect the Church, or risk its destruction in pursuit of the truth.

Only the Dragon Brigade can prevent an endless dark age. Their epic battle will test the mettle of those thrown into the breach, and determine the fate of this magical world.

Amazon Customer
5.0 out of 5 stars SO ADDICTING!
25 July 2019 - Published on Amazon.com
Verified Purchase
The trilogy had been on my TBR list for awhile but I waited until book 3 came out so I could binge them all one right after the other and wouldn't have to wait for the next to come out and I don't regret it one bit. I adore the Dragon Brigade Series.
Read more

Jared
5.0 out of 5 stars Great story that keeps you reading!
27 August 2018 - Published on Amazon.com
Verified Purchase
This was a great series that I thoroughly enjoyed. It had been a while since I found a series that was hard to put down. These books were a lot of fun.
Read more

Vinchi Cuyegkeng
3.0 out of 5 stars somewhat rushed but a good end.
1 April 2015 - Published on Amazon.com
Verified Purchase
Sad to see the series end, as usual Margaret Weis doesn't disappoint and I grew up on her writing, no spoilers here but I would have rated this book higher if not for the feeling that the pacing was a bit rushed. All in all a good tie-up for the series, but I felt books one and two where better.
Read more
Go to Amazon.com to see all 25 reviews 4.7 out of 5 stars
Get FREE delivery with Amazon Prime
Prime members enjoy FREE Delivery and exclusive access to movies, TV shows, music, Kindle e-books, Twitch Prime, and more.
> Get Started
Back to top
Get to Know Us
Make Money with Us
Let Us Help You
And don't forget:
© 1996-2020, Amazon.com, Inc. or its affiliates