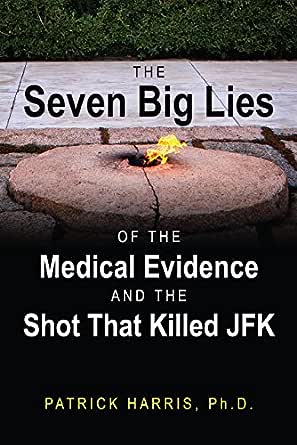 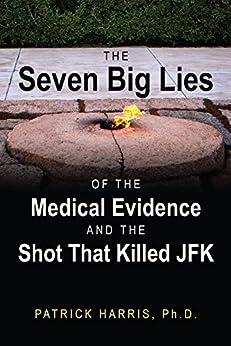 The Seven Big Lies of the Medical Evidence and the Shot That Killed JFK is the story of seven obvious and outrageous lies manufactured by federal insiders from 1963 through 1979 to disguise the fact that President Kennedy was hit by more than two bullets. It is known that a bystander was hit by a nearby bullet ricochet, and therefore that three or more bullets striking the President meant four or more shots. Since only three spent cartridge cases were found in the sniper's nest, this would decisively exclude the idea that Lee Harvey Oswald was the lone, unaided sniper who killed the President. Conspiracy theorists generally believe that the President's autopsy was falsified, but the author maintains that the data accumulated at Parkland Hospital and at the autopsy were largely correct, although greatly constrained by the military authorities who prevented the autopsy pathologists from dissecting the President's neck, sectioning his brain, or examining his clothing. Instead, the avalanche of lies and distortions of the medical evidence started at the close of the autopsy around midnight, November 22, 1963, and has continued to this day, aided and abetted by a complacent and compliant mass media. One of these lies is shown on the back cover of this book. One panel shows Warren Commission Exhibit 386, depicting the President's head wounds. The Commission maintained that a small wound at the base of the President's skull was an entrance wound, and that the larger wound above was the corresponding exit wound. The doctors at Parkland Hospital, Secret Service staff, and the autopsy pathologists at Bethesda Naval Hospital all noted a huge gaping hole in the back of the President's head, as shown in Warren Commission Exhibit 386. A second panel shows Exhibit F-48 from the House Select Committee on Assassinations, which investigated the assassination from 1976 through 1979. The exhibit is a medical drawing of a photograph allegedly taken at the autopsy and deposited in the National Archives. This exhibit shows the back of the President's head to be undamaged, and in fact, almost every hair is in place as if he just stepped off Air Force One. In the Warren Commission version the President has a huge hole in the back of his head, and in the House Select Committee version the back of his head is undamaged. One of these has to be a lie, and it is clear that the House Select Committee exhibit is the fabrication. It does not in any way resemble any of the data that were officially recorded by the doctors at Parkland Hospital, the President's autopsy, and by the Warren Commission.

Also discussed in this book:

* Analysis of the House Select Committee on Assassinations acoustic data, combined with the anatomic data and the Zapruder film shows that President Kennedy was struck by three bullets.

* The President was killed instantly by the second shot to strike him, which came from the general location of the sixth floor sniper's nest, above and behind the President.

* The President was already dead when he was struck by the third shot, the so-called "head shot", which likely came from behind the fence overlooking the grassy knoll.

* Sexually extreme individuals predominate at the upper and lower echelons of the assassination plot.
click to open popover

dray83
5.0 out of 5 stars A very good read loaded with information I hadn’t read before
7 May 2018 - Published on Amazon.com
Verified Purchase
As someone who has read(and reviewed them here on amazon) numerous books on the JFK assassination, there were interesting new theories in this one that were unique:

1)That there were actually two bullets that struck Kennedy’s head with the first headshot being the one that killed him instantly in the back of the head. This is very revealing because James Files(alleged Grassy Knoll gunman who confessed to killing JFK) says that both he and Charles Nicoletti(mob guy) both fired shots simultaneously with Nicoletti’s shell striking Kennedy about a thousandth of a second before his. This is not said in the book, it’s merely me connecting other known historical information. If Files is telling the truth, then this theory is very plausible because Nicoletti’s shot would be the fatal headshot from behind that killed Kennedy and Files’ shot would be the infamous Grassy Knoll headshot after that. Which is the headshot from the Zapruder film that blasts JFK ‘back and to the left’. The book claims that E. Howard Hunt(former CIA man and burglar from Watergate) in his deathbed confession claimed there was a “French gunman” who took the Grassy Knoll headshot. It’s a toss up and I could envision either scenario being the correct one.

2)There were many homosexuals who conspired to kill President Kennedy. This is the weird part but I do remember New Orleans District Attorney Jim Garrison’s case alleging that it was a “homosexual thrill killing” in which Clay Shaw was the main organization man who brought various elements together. I think personally that it’s a stretch and maybe some of these guys might’ve been gay but the motivation was purely financially and political.

This book is informative and executed in a good story for anyone who is interested in the JFK assassination.

j cannon
3.0 out of 5 stars nice read
27 May 2019 - Published on Amazon.com
Verified Purchase
Well done with good references and tying in the available data. Falls short in some ways, mostly the over emphasis on homosexuality as some sort of reason for the conspiracy and cover up. Still, on measure, a well written examination of of the events and persons associated with the JFK assasination.
Read more

Richard L. Hickman
5.0 out of 5 stars Excellent Review of the Abhorrent Murder of JFK
22 February 2019 - Published on Amazon.com
Verified Purchase
How did this happen in own country. Kennedy had his personal faults,but he was a good leader of the free world,and it was sad that the facts of his outright murder were covered up. All documentation related to the case must be opened to the public so the truth may be known regardless of who it hurts.
Read more

John C. Swaringen
4.0 out of 5 stars Quite good
26 May 2018 - Published on Amazon.com
Verified Purchase
I enjoyed reading this because it delved into information that isn't talked about in other books. It is educational in that respect, however some of the conclusions are not necessarily the most popular.
Read more

alex p ames
5.0 out of 5 stars Kennedy killed in a US Govt conspiracy
23 October 2018 - Published on Amazon.com
Verified Purchase
If you are interested in finding out what happened to JFK on November 22 1963 and who was responsible, read this book
Read more
Go to Amazon.com to see all 13 reviews 4.2 out of 5 stars
Get FREE delivery with Amazon Prime
Prime members enjoy FREE Delivery and exclusive access to movies, TV shows, music, Kindle e-books, Twitch Prime, and more.
> Get Started
Back to top
Get to Know Us
Make Money with Us
Let Us Help You
And don't forget:
© 1996-2020, Amazon.com, Inc. or its affiliates