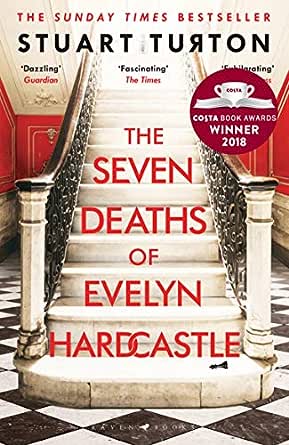 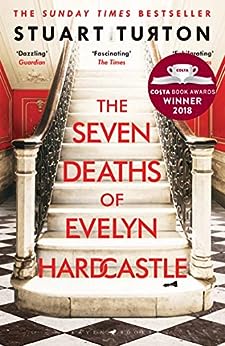 This book blew my mind. It is utterly original and unique. I couldn't get it out of my head for days afterwards (Sophie Hannah, bestselling author)

Snapdragon
TOP 10 REVIEWER
4.0 out of 5 stars Groundhog Day murder mystery
21 April 2018
Format: Kindle EditionVerified Purchase
This book starts to get weird very early. An assemblage of people come to a grim old place nineteen years after the murder of a child. One of them wakes up outside, convinced that someone called Anna has been shot and that the murderer has pressed a compass upon him, murmuring “East.” He finds his way back to Blackheath but has complete amnesia. He discovers that he is a doctor called Sebastian Bell, and the compass has his initials on it. So far, so good.

Then he/we start reliving this day, but ... Bell finds that he’s inhabited by someone else, and throughout all the mayhem that follows, that someone else transfers into other guests who are radically different. There’s a fat old lord, an ageing lawyer, a mad artist etc. The point of this exercise is to discover who killed Evelyn Hardcastle, the daughter of the house who’s just returned from Paris. A mysterious figure dressed as a Plague Doctor, complete with beaked porcelain mask wants to know. There is a malevolent footman about, whose aim seems to be to kill people.

It’s all very confusing at first, but once you accept the bizarre premise, it becomes strangely compelling, as the “someone” turns out to be Aiden Bishop. The author does a really good job of keeping us on the edge of our seats as the story unfolds. On the way, moral questions about what a person will do to achieve a desired result crop up. As Aiden transfers into other bodies to live the same day over again, gaining deeper knowledge each time, the question becomes whether an evil person can rehabilitate and whether trust is the right response.

It’s devilishly clever. Top marks for plotting. But in the gloomy atmosphere where terrible things happen, it’s not for the faint-hearted.

Missamity
TOP 1000 REVIEWER
3.0 out of 5 stars Great plot and beautiful prose betrayed by lack of characterisation
22 October 2018
Format: Kindle EditionVerified Purchase
This is a puzzling book in every sense of the word. The plot is intricate and inventive and the writing is beautiful, sometimes lyrical. So why didn’t I love it? I think because the characterisation is lacking. This may be because we first meet the narrator in the persona of someone he despises, and indeed most of the people whose bodies he inhabits are dislikeable, so that his personal traits are very slow to manifest themselves. This makes it difficult to identify with and barrack for the narrator. Until the last few pages I felt there was as much emotional tension in reading this book as in doing a cryptic crossword, and for me, neither the plot nor the writing overcame this deficit
Read more
One person found this helpful
Helpful
Comment Report abuse

Avril Carruthers
2.0 out of 5 stars How long do you want constant suspense?
26 December 2019
Format: Kindle EditionVerified Purchase
The novel certainly has tension and suspense, but by the time it finally wound up, I was exhausted and couldn't wait for it to finish. The characters were well drawn, but clearly not intended to be likeable, and there are multiple viewpoints and reversals of plot line it's often difficult to keep track of, so I never knew for certain who was to be trusted and who not. A clever idea, tightly held together - but perhaps it's too long. Maybe I could have handled five deaths. The denouement is ingenious but in the end, so what.
Read more
Helpful
Comment Report abuse

Rowena Buchanan
5.0 out of 5 stars Really enjoyed as Audiobook and Ebook
3 June 2019
Format: Kindle EditionVerified Purchase
This was really good. I don't give out five stars lightly. In this case, I think that having the different characters narrated (even with only one reader) really helped when I needed to read rather than listen. Thankfully, it was easy enough to keep everyone straight without needing to "thumb back through". I have recommended it to my husband as a good read.
Read more
Helpful
Comment Report abuse

laurel
5.0 out of 5 stars Every twist and turn leaves you gasping
28 May 2018
Format: Kindle EditionVerified Purchase
An amazing story which makes you keep turning over the pages till the end. You think you know he answer until the next page when you suddenly realise you got it all wrong again! Then when you finally work it all out, you realise all is not what it seems.

I admire greatly the mind of the author who created this mine field of mayhem and beg him to keep writing. He is truely gifted!
Read more
One person found this helpful
Helpful
Comment Report abuse

LT
3.0 out of 5 stars Ok, not amazing
22 September 2018
Format: Kindle EditionVerified Purchase
Interesting premise but ultimately I wasn't thrilled. There were some things that were super obvious and some that were frustratingly obtuse. Also too many characters which is part of the trick of the plot but it diluted my care for any of them. It's a fine read with some fun twists and interesting threads but I'm not super keen on it.
Read more
One person found this helpful
Helpful
Comment Report abuse

Ashleigh McGinley
5.0 out of 5 stars Like a modern day Agatha Christie!
5 February 2019
Format: Kindle EditionVerified Purchase
If I could give this book more than 5 stars I would. Seriously incredible one of the best books I have ever read. I am a HUGE Agathq Christie fan and finally I have found a book to match her writing. If you can have the patience for the jumping back and forth in time plot then I very very much recommend you read this book
Read more
Helpful
Comment Report abuse
There are 29 customer reviews and 35 customer ratings.
See all 29 customer reviews
Write a customer review

Go to Amazon.com to see all 92 reviews 4.4 out of 5 stars
Get FREE delivery with Amazon Prime
Prime members enjoy FREE Delivery and exclusive access to movies, TV shows, music, Kindle e-books, Twitch Prime, and more.
> Get Started
Back to top
Get to Know Us
Make Money with Us
Let Us Help You
And don't forget:
© 1996-2020, Amazon.com, Inc. or its affiliates