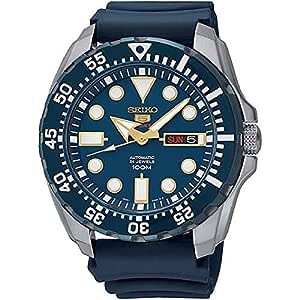 Jan P
5.0 out of 5 stars Stunning automatic
17 February 2020
Verified Purchase
I usually buy microbrand watches, and this is my first Seiko. I like watches that are in some way a little out of the ordinary. This is an absolutely stunning watch. The blue is much more subtle in real life than the pics make it look. Its almost black and glossy, except when the light hits it in a particular way, and then its "wow"! The gold accents team well with the blue. The face is a bit busy, but its still very clear to read. The watch is quite chunky and heavy, in a good way, though it would look odd on a small wrist. Rotating bezel works flawlessly, and is good for more than just diving. Easy way to time runs.
Read more
Helpful
Comment Report abuse

Thomas C.
5.0 out of 5 stars Opps I did it again...
29 September 2017 - Published on Amazon.com
Verified Purchase
This is the second Seiko "mini-monster" I"ve picked up recently. I really like these. The Seiko 5 Sports mini-monsters offer terrific value, with the same movement as the the 2nd Gen series of ISO/200M certified Seiko Monster watches, similar styling and build quality also. And they all have comparable, absolutely terrific lume. True, they aren't full-on dive watches, but to me personally, I prefer watches NOT to have a screw in crown, extended guards around the bezel and crown, and much prefer an exhibition case back that allow me to see the shinny 4R36-A movement as opposed to a completely covered stainless steel case-back. And I'd rather pay roughly half as much -- when priced reasonably (50% of MSRP) the Seiko 5 Sports mini-monsters are available for a song compared to one of the 2nd Gen/3rd Gen Monster watches ... if you can even find one, as Seiko, in one of it's dumbest moves ever, seems to have taken the wildly popular non-Prospex 2nd Gen models out of production.

What's really nice about the mini-monsters is that they aren't just clones with different color schemes - each one has unique stylistic elements. They have certain things that are more or less identical - yet each has a distinctive set of dial markers, and the bezel designs all have interesting variations. I'm surprised to find the cases are actually different also.

What is absolutely not possible to see in on-line pictures or even high-res you-tube videos about this model is that the gold borders around the lumed markers are very reflective and play with light in a way which is exceptionally striking. I've never seen that kind of thing before and it's really cool. I wasn't sure I liked the gilt edges of the hands and markers (based on photographs), but up close it's something that adds significantly to the attractiveness of the dial -- though It should be noted that the reflective shimmering of the gilded index borders can be distracting at times and detract from the legibility of the dial.

I also like having a watch which, while definitely being 'monstrous' in style has round rather than triangular indexes. This blends with the traditional "Submariner" look - in fact this model kind of reminds me of the blue Seiko SUMO (aka BLUMO).

The bezel of this watch is very interesting. I assume it's made of stainless steel, but it has surface treatment that causes it to look like its cut from some kind of semi-precious gemstone, like dark blue onyx. The color shifts, depending on the view angle, between jet black and the same dark blue color of the dial. The bezel is very similar to the bezel of the so-called "Sea Monster" Pospex model's, but the pattern along the side is simpler, a series of widely spaced groves. It clicks nicely, offering less than average resistance. There is very little play when it sets in position, and lines up well with indexes. There is no luminous 'pip' ... just a dot in the middle of the triangle indicator

The dark hues of the dial and bezel cause this watch to wear significantly smaller than the most of the other 'mini-mosters'. Side by side with the baby ice/snow monster, I'd swear it's several millimeters smaller in diameter. (But it isn't, they are both about 44.15 mm wide). I think this model might be an ideal choice for someone who likes the style of the mini-monsters but worries they are too wide for their wrist.

As I have frequently found with other Seiko automatics using the 4R3x movement, the watch I received is very accurate. I haven't had it long enough to have determined a precise number, but over the course of a couple days it's keeping time within +3 seconds a day, and runs on-wrist pretty close to perfect. I must admit to owning 9 watches with the SI 4R3x movement, and all of them run better than -2 to +7. I've never had to regulate them - just out of the box they are surprisingly within or very near COSC chronometer certification requirements. Perhaps I'm just lucky. Seiko doesn't factory-regulate this movement, so It's a crap shoot, but your odds of getting an accurate watch are very good. And it's possible to open the case back and manually adjust them if you get one that is inaccurate enough to bug you. There are various videos on Youtube that demonstrate the method. Regulating a watch is not for the faint of heart and it takes a steady hand and quite a bit of patience - don't try it with an expensive watch. Be careful not to let the tool you use slip under the adjustment lever - the hairspring attaches there, and if you bump it you'll likely pull the delicate coil out of shape and if that happens your watch no more ticky ticky.

Incidentally, Seiko has very recently released another group of Seiko 5 Sports watches that also have a similar look and feel. These have model numbers begining with SRPB (note the 'B' at the end). To be honest I'm not so impressed with these - the designs just don't seem as inspired; they might be fine watches so I'm only suggesting that you be aware that there are two sets of these now, and to look closely and compare to see which you prefer, the SRP models or the SRPB models...

ClassicEndurance80
5.0 out of 5 stars What a looker!
12 September 2017 - Published on Amazon.com
Verified Purchase
This watch looks way better in person and after wearing it for a few days I'm hooked on its styling. The 4R36 movement has hacking and hand winding, both of which are handy features but not 100% nessisary for the average person. However having those two features is something I do welcome and will use anytime I need to set the watch or wind it. The rubber strap is as comfortable as my Casio G Shocks but with a softer feel on my wrist, however the band is a bit stiff in terms of pliability. Its hard to describe, the band is soft yet stiff weird. The watch looks allot better in person and really look great in any kind of situation. The gold really accents the blue nicely and the slightly dark finish on the watches case finish off everything nicely. The Lume on this watch is very abundant and bright making it easy to tell time in a variety of lighting conditions. One thing to not is that this IS NOT a dive watch! Its a sporty dive inspired watch. Allot of people confuse the two. Seiko is very clear on which of there watches are dive watches and which are not. The watch doesn't have a screw down crown nor does it need one. The bezel does rotate but again, its not a dive watch. Al in all if your looking for a stylish time piece then I think this is it!
Read more

Just wanted to update, still running great, really like it. Update on daily accuracy: Gains about 5-7 seconds per day which I understand is pretty good for an automatic watch.
Read more
35 people found this helpful

Antonios Sylvitis
5.0 out of 5 stars Very good watch
7 November 2018 - Published on Amazon.com
Verified Purchase
Nice feel and look. Not any wrong markings as I read in some other reviews. All in place. Look like a more expensive piece. I am very happy with it. Hands and hour markers very very luminous too. You can see at any lighting conditions. I only wish, that the day wasn't bilingual as it takes some time to appear in English after midnight. But its Ok. I love it and am sure it will be trouble free in the long term. Its a Seiko !
Follow-up info: It seems running a bit fast which is about 3 sec in 6 hours. I hope that it will probably average with gain and loss, because if only gain, then it will accumulate to 12 sec / day. Reverting after few days.
Follow up info: First 24 hours gained 20 seconds. Hmm. I still like it and hope it may stabilize over time with less variation.
Read more

3 people found this helpful
Go to Amazon.com to see all 83 reviews 4.2 out of 5 stars
Get FREE delivery with Amazon Prime
Prime members enjoy FREE Delivery and exclusive access to movies, TV shows, music, Kindle e-books, Twitch Prime, and more.
> Get Started
Back to top
Get to Know Us
Make Money with Us
Let Us Help You
And don't forget:
© 1996-2020, Amazon.com, Inc. or its affiliates