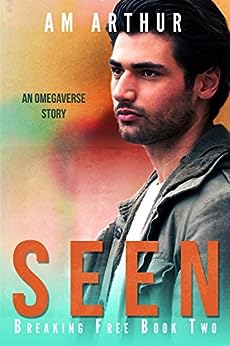 4.5 out of 5 stars
4.5 out of 5
56 global ratings
How are ratings calculated?
To calculate the overall star rating and percentage breakdown by star, we don’t use a simple average. Instead, our system considers things like how recent a review is and if the reviewer bought the item on Amazon. It also analyses reviews to verify trustworthiness.

Note that this is book 2 in the series and it's best read after Saved.
In book 1 we met Kell (Braun's brother). Kell is an omega mated to a very abusive alpha who he is accused of murdering.
Ronin, an alpha lawyer and childhood friend of Kell has been asked to represent Kell.

Note that this book mentions the physical and emotional abuse that Kell suffers at the hands of several alphas. My heart cried for Kell hoping that he gets his HEA.
AM Arthur did an amazing job with this book.
If Omegaverse is your thing, this book will not disappoint!
Read more
Helpful
Report abuse

SamhainSylph
4.0 out of 5 stars 4 & 1/2 stars for this wonderful book.
Reviewed in Australia on 12 January 2018
4.5 stars for this wonderful book. I've been reading this series in order, and both the books I've read so far have been brilliant. It's an interesting future world that A.M. Arthur has created: one which in many ways is just like ours, but in which there appear to be no women at all, the world is run in small separate provinces with their own laws, and the overall treatment of their smallest, most vulnerable and yet most necessary members of society (omegas) is stuck somewhere back in the 1800s in many ways. I love reading about this slightly different take on the usual alpha/omega story. I won't go in to many story-based details here, because you should read the book for yourself, but I have to explain why I've given this wonderful story 4 stars instead of 5. WARNING: this will potentially contain a slight spoiler.

The reason it loses a star (really only half a star) is because it really deeply annoyed me that towards the end, after hearing many times how Kell the omega wouldn't survive if he had to go to prison (as in physically, not just psychologically), all of a sudden he wants to accept a plea deal that he assumes will result in at least a small amount of time in prison!? And he thinks to himself that he'll hate it but he'll survive, and that his alpha Ronin will stop anyone from hurting him. To me this just came across as quite stupid, unthinking and overlysimplified, compared to the complexities of the rest of the book. There are no omega prisons or omega wards in prison because Kell would be the first omega to go to prison, so he likely goes in with the general prison population as he first assumed he would, which is why he first believed (quite rightly) that he'd not survive a week. Alternately, he gets locked in a solitary area, and then who's to stop the guards from raping and abusing him? What's his alpha going to be able to do to protect him from prison attacks? Nothing! Not to mention that the Senior Iverson, despite being apprehended himself, still has a lot of wealth and influence and the ability to make something "happen" to him if he chooses to, and prison would be the easiest place on earth for him to arrange this to happen in! The whole idea was ridiculous and illogical and interferred with my enjoyment of the book.
Read more
Helpful
Report abuse

Booklover
TOP 500 REVIEWER
4.0 out of 5 stars Gritty
Reviewed in Australia on 9 January 2021
This story follows the trial of an omega for the murder of his Alpha. This world is not a nice one. Omegas have no rights and can be treated abominably. Not an easy read, as there are regular references to severe abuse, but the plot is clever and ties in well with the previous book. It does have a sensible, satisfying hea.
Read more
Helpful
Report abuse

Ellie
5.0 out of 5 stars I loved it!
Reviewed in Australia on 17 March 2018
I loved this book! I'm really enjoying this series and can't wait to see what happens next.

I really liked Ronin but I loved Kell. This was at times heartbreaking but was gripping to read. Once again this series had me turning the pages eager to see what happened next.
Read more
Helpful
Report abuse
See all reviews

As stated, I've not read an Alpha/Omega (A/O) type story before, as my dislike of stereotypes made me assume (correctly as I have discovered) that I would find the story uncomfortable. To me, A/O stories sit too close to the role of women over the centuries/millennia, and to be honest (no offence intended out there to others), the role exhibited in this world by AM Arthur confirms this. The lack of rights, the assumed role (all Omegas just long to be a parent & that's their goal in life), the total dismissal of their wants, education, goals 'outside the home', even down to taking the Alpha's (husband's) name - it's the obliterated role women have been forced to endure (though I appreciate for some it's a fit) since time & memorial. This is something I as a reader, do not want to read.

So, as I say, it's not a bad story, I just hate stereotypes - by this I mean - society's forcing of a person into a role which is then enshrined in law & values. No thanks, not for this reader - there are enough stereotypes in real life.
Read more
Report abuse

Gillian Payton
5.0 out of 5 stars Loving this series
Reviewed in the United Kingdom on 8 October 2017
Verified Purchase
Kell and Ronin's story starts at the end of saved. When Ronin is asked by his friend Tarek to defend his mates brother on a murder charge, Ronin discovers the omega he bonded with as a teenager. But Kell is not the same, he's been abused, raped and his son kidnapped by the one person who should have looked after him-his alpha. The same alpha that Kell is accused of murdering. Ronin must break down the walls Kell has built around himself and his heart if he has any chance of saving Kell and building a life with him. This is a fantastic book, can't wait for book 3
Read more
Report abuse

Rowan
5.0 out of 5 stars Heartbreaking
Reviewed in the United Kingdom on 24 March 2018
Verified Purchase
This book really should have at the very least 10**** it was amazing. It covers the pain filled life of Kell, Braun’s older brother. It will break you heart to read about all the pain he’s had thrown at him by a whole load of people, but it’s also a beautiful love story. You should really read this book, but first read book 1 which is about Braun so you can enjoy this more
Read more
Report abuse

Katie townsend
5.0 out of 5 stars Wow such a wonderful story
Reviewed in the United Kingdom on 28 September 2017
Verified Purchase
Ronin and kells journey sent me on a emotional rollercoaster there are heartbreaking moments where you can't stop your tears from falling but there are also heartwarming moments that put your heart back together again

jacqueline hall
5.0 out of 5 stars Seen:omegaverse story(breaking free book2)
Reviewed in the United Kingdom on 14 October 2017
Verified Purchase
This was an excellent continue book from book 1so glad that kal and ronin got there happy ending can't wait for the next book in the series excellent
Read more
Report abuse
See all reviews
Back to top
Get to Know Us
Make Money with Us
Let Us Help You
And don't forget:
© 1996-2021, Amazon.com, Inc. or its affiliates