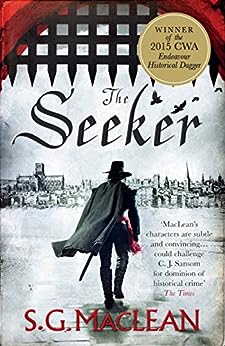 MacLean has the first-rate historical novelist's gift for making bygone political and religious squabbles seem rivetingly relevant, and communicates her passion for the period without downplaying its brutishness - Daily Telegraph (on A Game of Sorrows)MacLean is a terrific storyteller - Big IssueCombines the ironclad plotting of Sansom with the artful recreation of Mantel - Independent (on A Game of Sorrows)The contradictions and compromises of Cromwell's Proctectorate are rather brilliantly woven into the thrilling plot . . . If her next outing is as riveting as this one, she could challenge CJ Sansoms' Shardlake for dominion of the crowded historical crime niche. - The Times --This text refers to the paperback edition.

S.G. MacLean has a PhD in history from Aberdeen University, specializing in sixteenth and seventeenth century Scottish history. She lives in Conon Bridge, Scotland with her husband and four children. She has written four highly acclaimed historical thrillers set in Scotland, The Redemption of Alexander Seaton, A Game of Sorrows, Crucible and The Devil's Recruit. The Seeker is the start of a new series set in Oliver Cromwell's London. --This text refers to the paperback edition.

MacLean has the first-rate historical novelist's gift for making bygone political and religious squabbles seem rivetingly relevant, and communicates her passion for the period without downplaying its brutishness - Daily Telegraph (on A Game of Sorrows)MacLean is a terrific storyteller - Big IssueCombines the ironclad plotting of Sansom with the artful recreation of Mantel - Independent (on A Game of Sorrows) --This text refers to an out of print or unavailable edition of this title.

S.G. MacLean has a PhD in history from Aberdeen University, specializing in sixteenth and seventeenth century Scottish history. She lives in Conon Bridge, Scotland with her husband and four children. She has written four highly acclaimed historical thrillers set in Scotland, The Redemption of Alexander Seaton, A Game of Sorrows, Crucible and The Devil's Recruit. Her latest series of historical thrillers is set in Oliver Cromwell's London. The first book in the series, The Seeker, won the CWA Endeavour Historical Dagger and the second, The Black Friar, was longlisted for the same award. --This text refers to an out of print or unavailable edition of this title.
Read more

4.4 out of 5 stars
4.4 out of 5
832 global ratings
How are ratings calculated?
To calculate the overall star rating and percentage breakdown by star, we don’t use a simple average. Instead, our system considers things like how recent a review is and if the reviewer bought the item on Amazon. It also analyses reviews to verify trustworthiness.

JohnT
5.0 out of 5 stars Great characters - an atmospheric page-turner
Reviewed in the United Kingdom on 11 May 2017
Verified Purchase
I had just finished C J Samson's brilliant Shardlake series, and have been struggling to find a historical novel anywhere near as good. This book is not as complex as Shardlake but it's very good on characterisations and atmosphere with an intriguing plot - a very enjoyable read and I'm looking forward to the next one when it comes out in paperback.
Read more
36 people found this helpful
Report abuse

Bibliophile
3.0 out of 5 stars Plodding!
Reviewed in the United Kingdom on 5 January 2020
Verified Purchase
I don’t like giving negative reviews and I hesitate to compare one author with another but really - if you’re going to proclaim on the front cover that this novel ‘could challenge C J Sansom for dominion of historical crime’ then I think comparisons are valid and somewhat inevitable!
Like many of us here, I’m a huge Shardlake fan and only found this author because her books were recommended to me as a Sansom reader. Well - Shardlake this ain’t! The plot is almost non-existent and I really struggled to finish the book. The characterisation is not a patch on Sansom’s: we are told so little about Damian Seeker that we don’t really care about him one way or the other. He has no home life and we are told almost nothing of his background. I know that’s partly the idea: we’re meant to wonder about him, but there’s just nothing to make a reader warm to him at all. Far from finding him intriguing I just found him dull.
There are some fine descriptions in the novel, particularly those of the London coffee houses, but that’s not enough to make me want to read the next novel in the series.
Overall, a disappointing read.
Read more
7 people found this helpful
Report abuse

Margosa
4.0 out of 5 stars Thank goodness,not the Tudors.
Reviewed in the United Kingdom on 23 May 2019
Verified Purchase
Oh well, I thought, just another historical pot boiler. People doing what they are doing in fancy dress. NOT SO. Getting into the story, here are real, believable people in a thoroughly (to me) accurate time.
There are two major attractions here. First, the story is set in the Commonwealth/Protectorate Why are so many writers, both of fiction and non-fiction, fixated on the Tudors. There are many other far more interesting periods n our history waiting for some attention and one of them is here. Here, in the 1600s was a country grappling with the problems of government and indeed succession without a king. Further, there was a prospective king hovering in the background to muddy the water. If anyone needed security it was Cromwell and the government.

Secondly, the main character The Seeker (what a silly name) is the head of Cromwell`s personal security. Notice that. He is not concerned with the detection of crime except insofar as it relates to security. Authors who place criminal investigation in any period prior to the Victorian are sadly in error. Here is a man doing a job firmly set in its period.

As one gets into the story then, there appear believable characters in believable situations that we can empathise with. At least I can, otherwise I wouldn`t have bought the next book in the series. It will be interesting to see how these well rounded, living characters develop in future stories.
Read more
10 people found this helpful
Report abuse

Leepy Lee
5.0 out of 5 stars Well developed characters
Reviewed in the United Kingdom on 22 October 2020
Verified Purchase
Really enjoyed this book. I had been slowly working my way through CJ Sansom’s Shardlake series and wanted something of a similar style while exploring beyond the Tudor and early Elizabethan period, hence The Seeker.

It was interesting to read about life for people in the Commonwealth. I enjoy that aspect of historical novels - learning something about the period and the lives of ordinary people. And The Seeker certainly ticks that box with well fleshed out characters and interesting descriptions of the lives of people from all strata of the society back then.

But what kept me reading the most was Seeker’s character himself. Like Matthew Shardlake in CJ Sansom’s books, if you can develop some sympathy for the humanity of the principal characters, then I’ll keep turning the pages. While Seeker may have a hard shell, his heart was in the right place. I do find nothing more off-putting about books or films, if the core values and principles of the main characters repulse you. But The Seeker has an empathetic humanity at his heart.

While it didn’t have quite the depth (or more epic length and story arc) of the Shardlake books, the story was still well constructed with nuanced characters, each with their own motivations. The book had heart and was enjoyable enough to explore more of the series.
Read more
One person found this helpful
Report abuse

Clemens A. Schoonderwoert
5.0 out of 5 stars A Tremendous Thrilling Mystery!
Reviewed in the United Kingdom on 22 November 2018
Verified Purchase
This fantastic book, by this fine Scottish lady author, has been my very first reading experience, and I have to admit that it has been a delightful occasion.
At the beginning of the book you'll notice a real informative Historical Note of England in AD 1654, followed with a great list of Dramatis Personae, before it starts off with an intriguing prologue.
Story-telling is of a top-notch quality, the characters, whether they are real historical or fictional figures, come all vividly to life within this great mystery.
The main story starts off on the 1 November, AD 1654, the first year in the reign of Oliver Cromwell, Lord Protector of the English Commonwealth.
Main character of this series is a man who goes by the name of Damian Seeker, a man no one knows what's his real name is and where he comes from, but all know him for sure as the Agent of the Lord Protector.
The story starts when news is spreading about the murder of John Winter, Lieutenant in the New Model Army, who's been found in the corridors of Whitehall by Elias Ellingworth, a lawyer from profession, and who's standing over John Winter's bleeding body with the knife in his hand, and thus the accusing finger of guilt will be pointed at Elias.
What will follow is a very intriguing and compelling mystery, with a great plot, and in which Seeker will do anything to find the "true" killer of this murder and bring him to justice.
Very much recommended, for this is a rich and engaging historical story, and one that's in my opinion: "A Tremendous Thrilling Mystery"!
Read more
3 people found this helpful
Report abuse
See all reviews
Back to top
Get to Know Us
Make Money with Us
Let Us Help You
And don't forget:
© 1996-2021, Amazon.com, Inc. or its affiliates