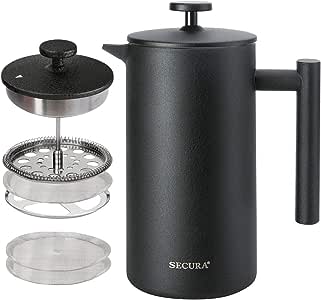 4.8 out of 5 stars
4.8 out of 5
16,042 global ratings
How are ratings calculated?
To calculate the overall star rating and percentage breakdown by star, we don’t use a simple average. Instead, our system considers things like how recent a review is and if the reviewer bought the item on Amazon. It also analyses reviews to verify trustworthiness.

Andreyna
5.0 out of 5 stars Amazing
Reviewed in Australia on 2 May 2020
Size: 34 OunceColour: SilverVerified Purchase
Fantastic. Just what we were looking for. Keeps the coffee hot
Read more
Helpful
Comment Report abuse

DIYer Dad
5.0 out of 5 stars Far better than glass models
Reviewed in Canada on 8 May 2017
Size: 34 OunceColour: SilverVerified Purchase
Bought this for the same reason as many others - the glass carafe on our previous one broke during routine washing.

Used it daily for a couple months and it works beautifully. Tried different grades of course grind coffee, and it worked just as well for each. I particularly like the double screen (which we do use). It does make plunging a bit more difficult, but the result is a very smooth coffee with no grinds in the cup.

The double walled carafe helps keep the coffee warm for much longer than an uninsulated carafe (though not as long as a thermal/thermos carafe).

Suggest the following general guidelines for brewing:
- Use between 5-6 grams of coffee per cup (we use between 30-35 grams for a full pot)
- Boil water and wait 1-2 minutes before pouring into the carafe (otherwise it will burn the coffee)
- Stir the contents shortly after adding the water
- Wait 2.5 to 4 minutes and then plunge slowly (any more and the coffee will be bitter)
- Enjoy

GarryG
3.0 out of 5 stars Great product - excellent value
Reviewed in Canada on 23 September 2018
Size: 34 OunceColour: SilverVerified Purchase
The construction of this French press is excellent as evidenced by its weight. It came with 2 extra filters that can be added for an even better straining of the grounds than the standard setup that comes with the press. All in all quite satisfied.
However, we previously had a glass press and we have noticed a difference in the taste of the coffee in the stainless one over the glass. The coffee has a slight metallic taste to it which was not present in the glass one we had (the glass broke hence the replacement with this one.
We like our coffee dark roasted and flavorful and generally buy better brands, so the taste is really important.
This difference in taste may settle down after more use as we have only used it twice since it arrived.
Would give it 5 stars if not for this taste difference. Should things improve in that area will update this review.
Read more
55 people found this helpful
Report abuse

Richard
5.0 out of 5 stars Beautiful quality and function
Reviewed in the United Kingdom on 23 November 2018
Size: 34 OunceColour: SilverVerified Purchase
This is a really good quality product. There are similar looking pots on Amazon and I went for this one because of price (bagged at £14.99 but it's worth the £21 currently listed) and the positive reviews of others. I agree! The person who got one with a rust spot was unfortunate, I concur with other reviewers that this is a quality product. The seller photos are true to life and reflect the product that I received.
UPDATE, April 2019: After five months of daily use I'm still delighted with this pot, it still functions and cleans up faultlessly. I bought a second as a present and the recipient is equally impressed.
Read more
19 people found this helpful
Report abuse

Brenda L Ibarra
5.0 out of 5 stars OMG!
Reviewed in the United States on 5 September 2017
Size: 34 OunceColour: SilverVerified Purchase
I've had every invention known to man on my quest for the perfect cup of coffee and well, I've found it. GOLD! I struck gold with this bad boy. My last toy was the Keurig, my least favorite of them all, its failed me miserably. When I say I've had every coffee making contraption out there, I mean it, and you diehard coffee connoisseurs know what I'm talking about. I decided to go back to far, far away and get another percolator because after searching my life through in memoryville I believed that the best cup of coffee I had produced came from a percolator. But this time, I wasn't willing to toss money to the wind and go with my gut. I decided to do something I hadn't ever done before. Research. After reading, my least favorite thing to do in life, a million different reviews and watching I don't even know how many videos on the art of coffee making and consumption, I started really feeling the French press. Again unwilling to just buy without going to the next level still again and researching the best presses money could buy you, and there are a LOT of choices and a LOT of opinions, after many hours of sweating and reading and considering and fear of making a wrong decision, I decided to give this stainless steel French press a try. For several reasons I chose the stainless steel over glass. This puppy is insulated, first. It's solid, tough and heavy; very well made. Second. It won't break, Third. It won't break, fourth and it won't break, fifth! After all of my video tutelage I was nearly an expert before this little 8th wonder of the world arrived yesterday. I got right on it. I took apart the press and thoroughly washed all of the parts and put on a pan of water and began grinding my beans. As soon as the water came to a boil I let it cool down until it stopped bubbling. I scooped three rounded tablespoons of my medium course grounds into the press, pored in about two inches of water over the grounds and stirred. Then, I let it sit for two minutes to brew. Then I poured the rest of my hot water I in the press and put the lid on slightly pushing the press down just in order to create a seal, and then, I waited. I put my timer on for 5 minutes. Then I began the decent.... Pressing gently so as not to force the hot water come splashing out and scalding me. It took maybe 30 seconds. Then, the final step of my journey was upon me. I poured and tasted the best cup of coffee I've ever had in my life. It's unbelievable. I can't say enough good about the experience and this stainless steel French press. I'm telling you tho, at this price which is pennies really, and with the construction of this press, it's the best thing since chocolate was found. I think of all of the money I've wasted on coffer making contraptions over the years and it makes me dizzy. A person spends more on coffee at a drive through in a day than this press costs. And, this coffees flavor and aroma is unmatched by any of them on their best day. You have nothing to lose and the best cup of coffee you've had in your life to gain!
Read more

Hillyfields
5.0 out of 5 stars Hot coffee!
Reviewed in the United Kingdom on 4 November 2018
Size: 34 OunceColour: SilverVerified Purchase
Now in constant use. Keeps coffee hot for ages, easy to clean good simple design. This size gives 4 mugs of coffee.
So much better than a glass jug.
Read more
11 people found this helpful
Report abuse
See all reviews
Get FREE delivery with Amazon Prime
Prime members enjoy FREE Delivery and exclusive access to movies, TV shows, music, Kindle e-books, Twitch Prime, and more.
> Get Started
Back to top
Get to Know Us
Make Money with Us
Let Us Help You
And don't forget:
© 1996-2020, Amazon.com, Inc. or its affiliates