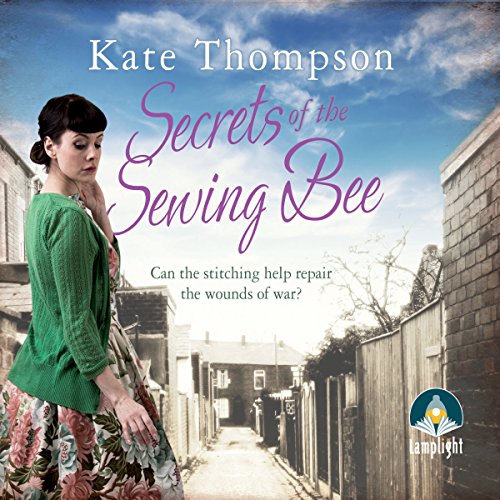 Secrets of the Sewing Bee

4.7 out of 5 stars
4.7 out of 5
312 global ratings
How are ratings calculated?
To calculate the overall star rating and percentage breakdown by star, we don’t use a simple average. Instead, our system considers things like how recent a review is and if the reviewer bought the item on Amazon. It also analyses reviews to verify trustworthiness.

Carol Anne Harvey
5.0 out of 5 stars Loved it.
Reviewed in Australia on 22 September 2016
Verified Purchase
Loved the story and characters, it brought back memories of Bethnal Green where I grew up and also reminded me of the bomb sites we'd still play on in the 60s. It answered a lot of questions about things I wish I'd asked my grandparents. The audible version was excellent too.
Read more
Helpful
Report abuse

Mazda
5.0 out of 5 stars A wonderful
Reviewed in Australia on 16 December 2016
Verified Purchase
I am English, born in 1953 and so a lot of this story was in my history book but I learnt so much more. A wonderful story
Read more
Helpful
Report abuse
See all reviews

Gwendoline Brammall
5.0 out of 5 stars Secrets of the Sewing Bee
Reviewed in the United Kingdom on 18 March 2018
Verified Purchase
Yes loved this book Beggining to end. Just couldn't put it down
I really enjoyed it. It had so much going on in it all the time.
Keeping you going with the women who worked at the
trouts sewing company. The Girls who works there were
All from the East End .they were all very brave women.
What they put up with. And loved Dolly what she did
Brightened there lives up. daily when her's was not so
Good but carried on keeping all her friends Happy and
Begining a sewing circle to help the soldiers and Sailors
And anyone less fortunate than herself. To knit items
Socks. Balaclava .gloves. Blankets to keep them warm to
Help continue the war .as best as they could. Everyone had
There own secrets. During that time. Dolly. Peggy. Flossy.
And they began to send its and letters .became Pen-Pals
Keeping the men on board happy. Writing to them to
Give them a sense of warmth. It was so edge of the seat
At times. with all that was happening. The bombs raining
Down destroying everything practically in sight. How they
Went on in some Air raid shelters. Was scary to say the least
Not knowing if you'd come out alive or not..they weren't all
Safe. But the Book was to say the least great really enjoyed
It. I'd certainly give this book a five star .rating. don't want
To give too much away about it. All I will say is read it.
It's a great read enjoyed it very much. Such a lot happening
In it. .Well done Kate Thompson
I enjoyed reading all the interviews of the people during the
War. what they went through .it was very interesting
And they were very courageous women. Those East Enders
From Bethnal Green. They had to be to get through that war.
Everyone from London too. Manchester. And Coventry.
Where factories where women worked .had to be strong.
They had families .To bring through it. Best they could.
Great Book thank you.
Read more
One person found this helpful
Report abuse

Mrs H
5.0 out of 5 stars Cry, laugh and fabulous women - oh joy!
Reviewed in the United Kingdom on 12 April 2016
Verified Purchase
I was hooked on this book from the beginning with shy, kind, strong, and ribald women all working in Trouts, sewing uniforms, all making this it into a winner which I could not put down. Sometime I laughed out loud, sometimes I cried and sometimes I laughed and cried at the same time. Never has a book made me feel emotions like that. The women (and men) were wonderfully vibrant and I could see them sitting at their Singers, laughing, singing and shouting for "Dolly" the tea lady. Not only was this a captivating read, but also a history lesson. I have learned so much about the women of this area; they are the true heroes of the war as they fought it on all fronts, slept in the Tube, and did it all again the next day. What a wonderful book, I would recommend it if you want a book you can get in to from the first page and that holds your attention all the way through.
Read more
8 people found this helpful
Report abuse

Petra 🤗📚📓🖋📮
5.0 out of 5 stars a group of friends who were soon to become closer than family and as caring as any family could ever be..
Reviewed in the United Kingdom on 23 July 2016
Verified Purchase
Secrets of the Sewing Bee written by the very talented Kate Thompson was another wonderful read. Once again we are taken back to Trouts Factory where the friendliest and bravest bunch of women worked hard for a few shillings. Unlike  Secrets of the Singer Girls  we meet the girls at the beginning of the Second World War, where the Blitz is taking over their lives, yet each day the girls were sitting at their sewing machines sewing Uniforms and Bandages for their "boys" who were away fighting for their freedom from Hitler.
With this wonderful read the main characters were Flossy Brown and Peggy Piper, these were the new girls in Trouts and as different as chalk and cheese yet through the hazards of the Blitz and the many problems the war was to bring them they were soon to start a special friendship which was going to support them when times were tough.
For me personally my favourite character was the tea lady with a heart of gold Dolly Doolaney, she had her own secrets which were causing her own heartache but that would not stop her helping those that needed a special dose of Dolly's tender loving care which she certainly knew how to deliver in her own unique way and that same unique way was to bring a lot of love and happiness to so many of the inhabitants of the Eastend of London, and that included a lot of strangers!
Why I loved this book so much was how it showed the true strength of spirit of the inhabitants of the Eastenders of London. They did not see class or creed, they only seen what was needed by those who needed a helping hand.
This book had it all, friendship, love, heartache, bravery, sickness and so much more the main thing it did have was secrets and each of the characters had their own private secrets which would control their future if they let them. but as a reader I was able to see each of the characters overcome what life had delivered to them which had a habit of mapping out their future, that was until the members of Trout's staff showed them their love of life and those that surrounded them daily.
I loved how once again Vera, Archie, Daisy and Sally and of course Pat are characters within this excellent read, we meet them in their younger days and it was great to see what life was like for them through the war years. Though they were not main characters within this read, they still played their own part within this excellent read.
Kate Thompson's writing was first class throughout and through that same wonderful writing the emotions flowed and I have to say it was not only the character's emotions which flowed, as for me the book had me on the edge of my seat as I waited to see did Flossy get her happy ending and the gift of belonging, what would become of Dolly and her tea trolley which served a cup of tea with a slice of Dolly's wisdom plus a hug if needed. And not forgetting Peggy Piper, she had her own secrets and those secrets were ones which could turn the factory against her. But soon factory life would soon take over each of the friends lives as they lived the only way they knew how by fighting to survive, not only the bombs but the many problems which the war brought them through rationing and the bombing which could wipe out all they knew and that included their homes. Through Kate Thompson's writing, i loved how she showed the true strength of the characters of the Eastend of London and how they survived poverty, yet if their next door neighbour needed something they were always there for each other. The Blitz might have destroyed the buildings of London but the spirit of the Eastend held strong and not even Hitler could break them, they might have damaged them but they would overcome everything Hitler sent them.
Secrets of the Sewing Bee written by Kate Thompson was a great read which will not only entertain but will show you the horrors of war yet the love and compassion which held these people was evident throughout this wonderful book which i would recommend to anyone who loves Second World War historical fiction which was laced with historical facts throughout.
Read more
One person found this helpful
Report abuse

Anne T
4.0 out of 5 stars A moving story of women and the Blitz
Reviewed in the United Kingdom on 28 June 2016
Verified Purchase
Attracted by the title I was quickly drawn in to the story of these women who lived through the fierce bombing of the East End; they faced tragedy and fear but through it all had a huge camaraderie. The storyline was both moving, difficult to read but uplifting as the main characters found love. I'm not sure the author understands the difference between sewing and knitting, though. A sewing bee called The Victory Knitters? There were many references, even in the same sentence, to a sewing circle but then talked about knitting needles and wool. Okay, there was mention of a quilt but this was much in passing. Being a keen knitter and sewer, this really annoyed me as the story developed. Some of the characters seemed a little too good to be true - Dolly, for instance. However, this book kept me reading.
Read more
Report abuse

P M Millward
5.0 out of 5 stars Another brilliant read from Kate Thompson
Reviewed in the United Kingdom on 28 March 2016
Verified Purchase
Another superb book set in 1940's Bethnal Green, London by Kate Thompson about life at Trouts garment factory. we visit once more the characters Vera, Sal & Daisy and meet young Flossy Brown straight from the orphanage she was brought up in. Dolly the tea lady befriends Flossy and later to reveil a secret she has been holding for many years. Cant wait for more from Kate and hopefully Trouts factory.
Read more
3 people found this helpful
Report abuse
See all reviews
Back to top
Get to Know Us
Make Money with Us
Let Us Help You
And don't forget:
© 1996-2021, Amazon.com, Inc. or its affiliates