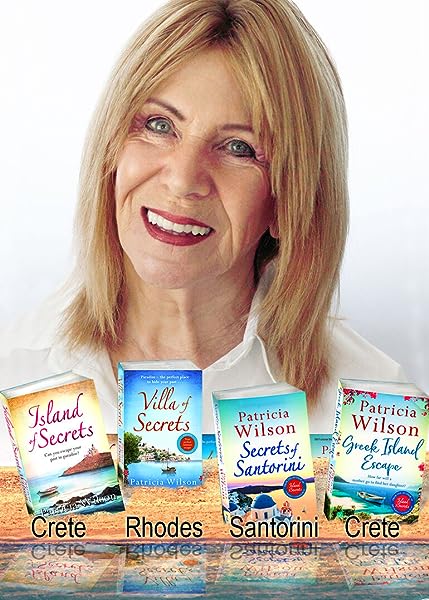 Secrets of Santorini: Escape to the Greek Islands with this gorgeous beach read Paperback – 1 July 2019

by Patricia Wilson (Author)
4.4 out of 5 stars 765 ratings
See all formats and editions
Sorry, there was a problem loading this page. Try again.

The brand new escapist holiday read with depth and drama, perfect for fans of Victoria Hislop and Lucinda Riley.

She'll uncover the shocking secrets of her past in paradise...

Sent away to convent school at the age of six, Irini McGuire has never really known her celebrated archaeologist mother, Bridget, who lives on the paradise island of Santorini. So, when Irini receives news that Bridget has been injured at a dig and is in coma she knows it is time to return to the island of her birth.

Discovering her mother's notes, and driven by rumours that her mother's injury was no accident, Irini starts to reveal the dark secrets behind her family's separation.

Can she unearth the truth about her parents and her past before it is too late?
Read more
Previous page
Next page

One for the suitcase - whether real or imaginary. You'll feel you're in Greece as soon as you start reading. ― FROST Magazine

Packed with intrigue, danger and romance, Wilson's passion for the classics and an endless fascination with foraging into the vibrant corners of history, this is a poignant and beautifully written story best read on a sunlounger with a glass of chilled ouzo ― Lancashire Telegraph

Patricia Wilson was born in Liverpool, has lived on Crete and is now settled on Rhodes. She was first inspired to write when she unearthed a rusted machine gun in her garden - one used in the events that unfolded during World War II on the island of Crete. The now elderly women involved in those events told Patricia their story, and her celebrated debut Island of Secrets (150k copies sold) was the result. Villa of Secrets (60k copies sold) was inspired by documents found in a secret room in a police station in Rhodes detailing the fate of the Jews on the island in 1944. Secrets of Santorini is inspired by frescoes found on Santorini.
Start reading Secrets of Santorini on your Kindle in under a minute.

Patricia Wilson is English, born on the Wirral, Cheshire. She retired to Greece over 25 years ago where she renovated a dilapidated village house whilst observing the Greek way of life and absorbing the culture. She learned Greek dancing and cookery, and enriched her love for poetry, photography, and painting. It was only a matter of time before she started writing.

While living in this remote mountain village on the island of Crete, she dug up a rusted machine gun in her garden. After taking the weapon to the local kafenio, the locals told her the terrible history behind it. She had already started to write this sorry tale when, a couple of months later, the elderly village women came knocking on her door to tell their own, personal accounts of those heart-breaking events. After investigating further, she wrote ISLAND of SECRETS, a family saga based on real events that took place in her village in September 1943. In a matter of weeks, ISLAND of SECRETS sold six figures in Europe and was published in five languages.

Less than a year later, Patricia had moved to the Greek island of Rhodes where she wrote her second novel, VILLA of SECRETS. This was also a family saga based on a true story of injustice that took place on Rhodes. Walk through the castellated city of Rhodes Old Town and see the area where 2,000 Jews were rounded up by the Axis. Even as she wrote the story, new evidence came to light. A door in the main police station was unlocked for the first time in 70 years and some amazing documents appeared. VILLA of SECRETS received rave reviews and went straight into the Sunday Times top 15 books.

Patricia Wilson's next novel was influenced by a piece of pottery bearing mysterious symbols. While investigating what it might be about, she discovered the ancient history of Santorini according to legend, and the life-size frescoes that illustrate the writings of Plato. She discovered that Santorini, an island once ruled by women, had a strong connection to Crete and involved a great mystery regarding the disappearance of its people. SECRETS of SANTORINI came out in 2019 and remains a best seller.

2020 brought Patricia's forth novel, GREEK ISLAND ESCAPE, and corona virus! The closure of all bookshops arrived with the pandemic. Nevertheless, the reviews have been outstanding. Patricia says this is because we can all put ourselves in the position of a mother searching for her missing daughter. GREEK ISLAND ESCAPE revolves around epic events in Athens and Crete and takes place at one of the most difficult times in Greek history: the 60's and 70's. Once again, it is inspired by a true story. A tragic time for Greece, and an agonizing love story.

April 2021 brought us Patricia's next novel which hit the bookshops and supermarket shelves running. SUMMER IN GREECE concentrates on the story of a trainee nurse, Gertie Smith in WW1, and Titanic's sistership HMHS Britannic, built by the White Star Line in Belfast and sailing out of Liverpool. Shelly Summer discovers great-grandmother Gertie’s memoirs after her death.

'This is my favourite novel to date, not only for the story, but also because I learned so much while completing the research. Also, it was wonderful to visit the lesser-known islands of Kea and Syros, which are both beautifully unique.'

Patricia Wilson's next novel will be available in April 2022. The location is an island so small and inimitable, most people have never heard of it, yet at one time, 9,000 Greeks lived there. Also, for the intrepid explorer, a free ferry runs twice a week from the island of Rhodes. This is another story based on epic events in Greek history. Olivia travels from Brighton to Greece to try and uncover the secrets her mother and grandmother kept from her. Will the abandoned factory that once made precious oils reveal clues to the wartime tragedy of her ancestors? Are the terrible whispers about the British soldiers true?

'I’m thrilled when a reader tells me she enjoyed my novels, particularly if she leaves a review on Amazon. After all, I spend a whole year researching and writing for my audience, it's good to know I haven't wasted my efforts. Best wishes, Patricia.'

4.4 out of 5 stars
4.4 out of 5
765 global ratings
How are ratings calculated?
To calculate the overall star rating and percentage breakdown by star, we don’t use a simple average. Instead, our system considers things like how recent a review is and if the reviewer bought the item on Amazon. It also analyses reviews to verify trustworthiness.

C J W
4.0 out of 5 stars Soak up Greece
Reviewed in the United Kingdom on 10 June 2019
Verified Purchase
I title this Soak up Greece because this is a book that transports the reader to the beautiful setting of this country. Having been to Greece for the first time last year I could visualise the beauty of her locations. The story is good - a tad long and some parts not necessary for the story mainly being the over description of magnetic intimacy between Angelo and Irini. Apart from this I would say this is a book worth reading as it is of a fascinating topic. Maybe some people who are not interested in archaeology could find it rather tedious in parts but keep reading as this is a book that has intrigue and interest. This is my second read by this author and I am now going to download another, each one set in Greece, and hope I find it as enjoyable as the first one I read which was Island of Secrets. This author is obviously in love with imparting her love of Greece but does this through her writing good mysteries.
Read more
11 people found this helpful
Report abuse

Eva C
2.0 out of 5 stars Not for me
Reviewed in the United Kingdom on 14 August 2019
Verified Purchase
This book did not grip me at all. I found the main character extremely annoying and the story line bordering on ridiculous. I can see why the "dreamy" bits from Greek mythology were embedded into the story but i just found them long winded and very tedious. After a while I found myself skipping those parts completely. I kept reading the other parts to the end but this is not a book I would recommend.
Read more
9 people found this helpful
Report abuse

Dianna Pearson - Morgan
2.0 out of 5 stars Not a great read.
Reviewed in the United Kingdom on 22 May 2019
Verified Purchase
I found this book an annoying read got the extent i skipped past all the ancient gods part - although I totally understand how /why it's in the storyline - it wasn't a book i enjoyed - but am sure there are people out there who will love it.
Read more
13 people found this helpful
Report abuse

smokieblue
1.0 out of 5 stars Sorry not good!
Reviewed in the United Kingdom on 13 August 2019
Verified Purchase
Sorry this book was not for me. I gave up on chapter 16. It was so bad and went back through dreams set around Greek mythology which I skipped over maybe that was the problem. I was looking forward to the book as I enjoyed Victoria hyslop books. I am sorry but I don't think I will read any more by this author.
Read more
7 people found this helpful
Report abuse

SuzyQ
3.0 out of 5 stars Disappointing
Reviewed in the United Kingdom on 11 June 2019
Verified Purchase
I was so disappointed in this book after reading her previous. I skipped over all the ancient gods part even though I knew why it was part of the story. I know some people will love it, but not me.
Read more
8 people found this helpful
Report abuse
See all reviews
Back to top
Get to Know Us
Make Money with Us
Let Us Help You
And don't forget:
© 1996-2022, Amazon.com, Inc. or its affiliates