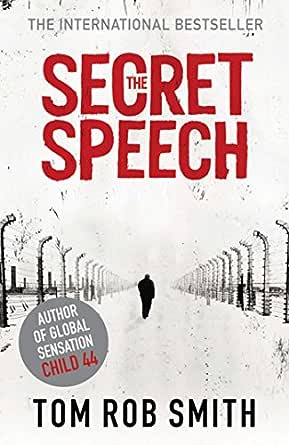 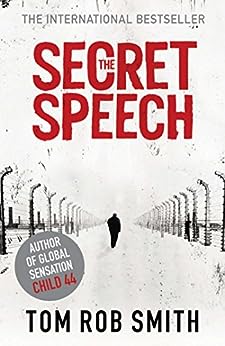 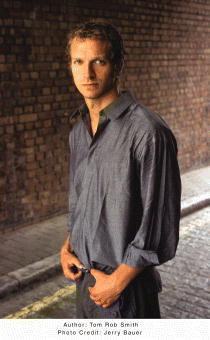 "A debut novel from a shockingly talented 28-year-old Brit...Nerve-wracking pace and atmosphere...Smashing." -- Starred KIRKUS --This text refers to an alternate kindle_edition edition.

Tom Rob Smith was born in l979 to a Swedish mother and an English father and was brought up in London where he still lives. He graduated from Cambridge in 2001 and spent a year in Italy on a creative writing scholarship. Tom has worked as a screenwriter for the past five years, including a six-month stint in Phnom Penh storylining Cambodia's first ever soap. His first novel, CHILD 44, was longlisted for the 2008 Man Booker Prize, shortlisted for the Costa First Novel Award and the inaugural Desmond Elliott Prize, and won the Crime Writers' Association's Ian Fleming Steel Dagger Award for best adventure/thriller novel of 2008, and the American edition won Best Debut at the International Thriller Awards and Best Debut at the Strand Magazine awards. --This text refers to an alternate kindle_edition edition.

4.3 out of 5 stars
4.3 out of 5
710 global ratings
How are ratings calculated?
To calculate the overall star rating and percentage breakdown by star, we don’t use a simple average. Instead, our system considers things like how recent a review is and if the reviewer bought the item on Amazon. It also analyses reviews to verify trustworthiness.

Robert Fernback
5.0 out of 5 stars the secret speech by Tom rob smith
Reviewed in Australia on 10 April 2014
Verified Purchase
I really enjoyed reading this book, loved the characters and the story. One of these books that you must keep turning the pages. Highly recommended.
Read more
Helpful
Comment Report abuse

Jessi Galbraith
4.0 out of 5 stars Four Stars
Reviewed in Australia on 23 May 2015
Verified Purchase
Fun book, easy to read. Not as good as the first but that's often the case!
Read more
Helpful
Comment Report abuse

Jennifer Cameron-Smith
TOP 10 REVIEWER
4.0 out of 5 stars `Free my husband, or I will murder your daughter.'
Reviewed in Australia on 7 January 2014
Set in 1956, this sequel to `Child 44' depicts the Soviet Union after the Khrushchev regime leaks a secret speech describing Stalin's abuses of power, This creates an environment in which those who carried out Stalin's instructions become fearful for their own lives. Leo Demidov, now working as a homicide detective, becomes a target. A woman known as Fraera is the wife of a priest Demidov denounced and now leads a violent criminal gang. Leo's adopted daughter, Zoya, is kidnapped by Fraera's gang. Fraera will only release Zoya if her husband is released from prison.

The action moves from Moscow to Siberia and then to Hungary. There are so many incidents in the novel that I found it difficult to appreciate the historical backdrop. The paranoia, as well, of those who hear or read the secret speech is sadly understandable. There are those who see the speech as a trick, those who see it as a betrayal and those who hope it signals the beginning of a newer and more positive era.

I enjoyed this novel. In many ways, the rapid action and the uncertainty kept the reader (as well as the characters) off balance. What is real and what is not is an individual (sometimes a collective) perception and changes with shifts in power. The novel left me slightly dissatisfied at the end, and I'm not sure whether that is because of the number of action-filled incidences or because the world created was far too reminiscent of the history of this period.

Helen Simpson
4.0 out of 5 stars A decent historical read but not as thrilling as I'd hoped
Reviewed in the United Kingdom on 11 January 2018
Verified Purchase
3.5 stars
Set three years after Child 44 and after Stalin's death. I liked that both this (and the previous novel) are based on real events, it's a period of time I knew very little about and the author successfully manages to set his story to a realistic politically tense time in history.
The 'secret speech' has been made by the new leader Nikita Khrushchev in a bid to put the violence and torture of Stalin's regime behind him and the country. This is good news, a new and more fair way to live except that not everyone believes so and there are many who, in following the old regime, feel under threat. In this novel though, they have more to worry about than the change in itself...there appears to be some victims who are happy to turn the tables on their former oppressors and make them fear for their and their families lives!

I liked the premise, the setting and large parts of the story but I just didn't feel this novel was as gripping as Child 44. I had moments during this one where my thoughts drifted and didn't absorb the text as well as it should have. Character-wise, some of them were lacking in realism, seeming unbelievably 'soft'. There were too many predictive outcomes which was a shame because I especially enjoyed in the first book that it WAS unpredictable, Rob-Smith didn't seem scared to pull the trigger on some of his characters. This in contrast was a little too 'tidy' for me.

Alyssia Cooke
3.0 out of 5 stars Doesn't quite live up to Child 44
Reviewed in the United Kingdom on 4 November 2019
Verified Purchase
Whilst this is a decent enough read it doesn't compare to Child 44, the first in the series. One reason for that is certainly the change in tone from a powerful mystery set in a culture of paranoia and denunciations, where nobody is safe from arrest, torture and execution or forced imprisonment in the gulags. This is far more overtly political and yet it is also far less subtlely woven. It plays far more into the action thriller than the unnerving dystopian mystery, where it is one man against the regime to solve a case that doesn't exist as far as his superiors are concerned. The style too often veers into James Bond territory, and not only is that not what I had anticipated, it also jars considering the intricacy of its predecessor.

Another less easily defined reason is the characters, and this has multiple fronts. Firstly, Leo has changed and whilst he is undoubtedly a better man, he is far less interesting for it. He is looking for redemption, and becomes far more meek and mild - almost like a whipped dog at points. His wife Raisa is a strong character and could possibly have carried the book if it had been done from her perspective. The two children Elena and Zora are respectively a blank canvas and an annoying brat, and where this might have been brought to the fore with an explanation of their psychological trauma, it is not. They left me bored and irritated by turns, but I can't say I ever cared about them.

It is then never explained how Fraera took control of an underground criminal group and without that background, I can't help but find that unrealistic. It is clear from descriptions that these gangs are actively misogynistic; they'll love their mothers but they'll never take orders from a woman. Without the background to understand how this happened therefore, it is difficult to credit this as believable. The gang behind her are never fleshed out as more than brainless louts, so the only other character worth following really is the street urchin turned assassin under her care. Whilst he is certainly one of the more interesting characters though, he is essentially a bit player and you never see events from his perspective.

So, eh. If I hadn't read Child 44 then I'd consider this a solid if uninspiring read. The problem is that I wouldn't have picked this up without reading the earlier volume, and it didn't deliver to the same standard. There are too many hair raising escapes and death defying events for it to count as the same genre. It doesn't seem as credible or realistic, instead feeling as though the author is relying on flashy action scenes and sappy family moments to carry it through instead of intelligence. I'll likely read the third, but more in homage to Child 44 than because of this.
Read more
Report abuse

Marmaduke
5.0 out of 5 stars Book 2 - as good as the 1st.
Reviewed in the United Kingdom on 6 November 2018
Verified Purchase
Cannot wait to start the 3rd book in the series, Agent 6 . Thoroughly shocking, thought provoking but absolutely compelling to read. I could not put it down, it took 2 days to read. You don't have totally understand history or politics to enjoy these books. Tom Rob Smith has a unique way of drawing you into the timeline, follow the characters and leaving you thinking about what is coming next. Brilliant.
Read more
One person found this helpful
Report abuse

Dangerscouse
5.0 out of 5 stars Another excellent book
Reviewed in the United Kingdom on 8 March 2012
Verified Purchase
I do find it fascinating how people's opinions can be so polarised. For me this is another excellent book, with Child 44 being slightly better, but that is very very difficult to beat, and well worth reading.

The plot does move around a lot but there is still a strong reason for this, and as the story unfolds it makes sense and fully accords with the sense of paranoia and extreme measures that were necessary in Russia in the 50s. Personally I felt that all of the action added to the suspense and didn't in any way detract from it.

Seeing as quite a few people having read, and enjoyed, Child 44 didn't enjoy this book I clearly can't guarantee that you will enjoy it, but I know for sure that I couldn't put it down and enjoyed it from start to finish. I think the best thing to do is just to forget about your expectations and read it and allow Tom to take you on his journey.
Read more
10 people found this helpful
Report abuse

BL Browne
5.0 out of 5 stars An excellent read
Reviewed in the United Kingdom on 24 January 2017
Verified Purchase
I thought this book was great. I really don't understand the negative feedback that some readers have provided. It kept me glued from end to end and like Child 44 I couldn't put it down. The only comfort I got from the book ending, was that there was a 3rd book to follow.

One thing about these books is to expect the unexpected. Like the first book it is full of suspense, horror and mystery and provides an appreciation of life after Stalin (which I knew nothing about until I picked up the 1st book). I have not read many historical fiction based in Russia and this has more than sparked my interest - so I will be reading some more.

An excellent read and I think that Tom Rob Smith is a brilliant and very clever author.

I have just started book 3 and am already engaged.
Read more
One person found this helpful
Report abuse
See all reviews
Get FREE delivery with Amazon Prime
Prime members enjoy FREE Delivery and exclusive access to movies, TV shows, music, Kindle e-books, Twitch Prime, and more.
> Get Started
Back to top
Get to Know Us
Make Money with Us
Let Us Help You
And don't forget:
© 1996-2020, Amazon.com, Inc. or its affiliates